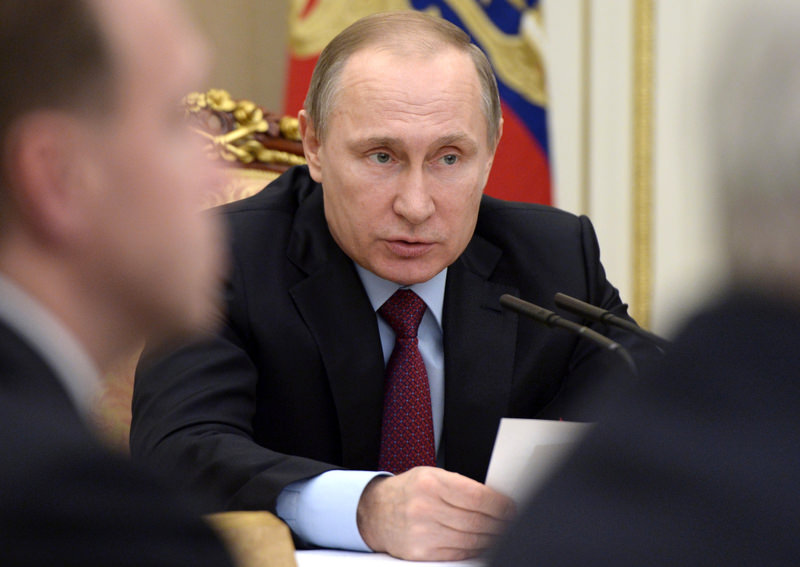 Russian President Vladimir Putin holds a meeting on privatization issues at the Kremlin in Moscow.
by Feb 04, 2016 12:00 am

With Russia in dire need of cash as oil prices slide, Putin's privatization plan could bring in billions of dollars of revenue. The oligarchs are the most likely potential buyers of the largest companies

Russian oligarchs are the most likely potential buyers of the stakes in some of the country's largest companies that President Vladimir Putin wants to sell. The Kremlin said on Tuesday foreign investors were welcome to participate in the privatization announced the day before, which has been driven by an economic crisis brought on by low oil prices. But former officials, bankers and analysts said the perceived risks of a country subject to western sanctions over

Ukraine and with a history of disputed property rights, would limit foreign participation. Two senior government officials said the plan may only raise between 50 and 80 percent of the trillion roubles envisaged. Russian's well-connected magnates may have to be cajoled into investing at a critical juncture for the economy, but could in the long term end up with valuable assets at bargain prices, leaving the Kremlin open to accusations of sweetheart deals. The preliminary privatization plan, aimed at preventing the state budget deficit from ballooning, coincides with a second year of recession for Russia where share prices have slid along with the price of crude.

Crude prices, Russia's main export, trade at around $30 per barrel - nearly half the $50 per barrel penned into the 2016 budget, which envisages a deficit of 3 percent of GDP and will not be revised until March. "This looks like selling diamonds from Russian crowns at a pittance," said an investment banker at a Western bank. Putin, a vocal advocate of state control, could face unwelcome scrutiny from a Russian public that still remembers the privatization of the 1990s, when state companies were sold at give-away prices to a chosen few.

According to two officials familiar with the discussion on privatization, 4 percent of Rosneft could be sold on the stock exchange, but there is reluctance to do so, considering the super-low price of the company's shares. Sanctions do not prohibit Rosneft shares from being sold by the state, but many potential buyers will be cautious given that oil prices are still on a downward trajectory.

Sovkomflot, which has already held several meetings with investment funds, according to a top manager of the company, generates 80 percent of its revenues from outside Russia, lowering its exposure to country-related risks.

Finance Minister Anton Siluanov has said he hopes for around 1 trillion roubles, or 1 percent of gross domestic product, from privatization this and next year. The 2016 budget, approved before the new plan, envisages only about 33 billion roubles ($416.19 million) in privatization revenues. But two senior government officials said the plan may bring a total of between 500 billion roubles and 800 billion roubles. "Some assets will be sold - the budget needs cash," said Sergei Aleksashenko, a former deputy central bank governor and a non-resident senior fellow at the Brookings Institute in Washington. "But overall the proceeds from privatization will be much less than the drop in oil revenues."

With demand from global investors expected to be lower, local players may have be left with open playing field. Will Ballard, head of Emerging Markets and Asia Pacific Equities at Aviva Investors in London said the timing was not ideal from the state's point of view.

"If they are looking to do it now, it must be selling effectively from a need basis rather than 'seller wants to get the maximum price'," he said. Others went further. "This privatization looks as if intended for big businesses," a source in the financial market said. A former government adviser said the timing and shape of the plan may be driven by factors beyond the need for cash.

"All of this may indeed have been done to make the assets more affordable for politically connected businessmen," the adviser said. "Or just out of their usual paranoia - they don't want to release control."

This could potentially enrich those around Putin and cause public discontent that could hinder his possible presidential re-election in 2018. According to polls - more than half of Russians oppose privatization.

It may also be easier said than done. Putin has repeatedly urged Russia's super-rich business elite to bring back money they moved abroad as the rouble currency plunged. "It's possible it is tied to the process of de-offshorisation to bring money back to Russia and in return get good assets at half price," the financial market source said. "The only option is to force some oligarchs, loyal to the Kremlin, to buy stake with a premium to market prices," said the investment banker, who is close to the process.