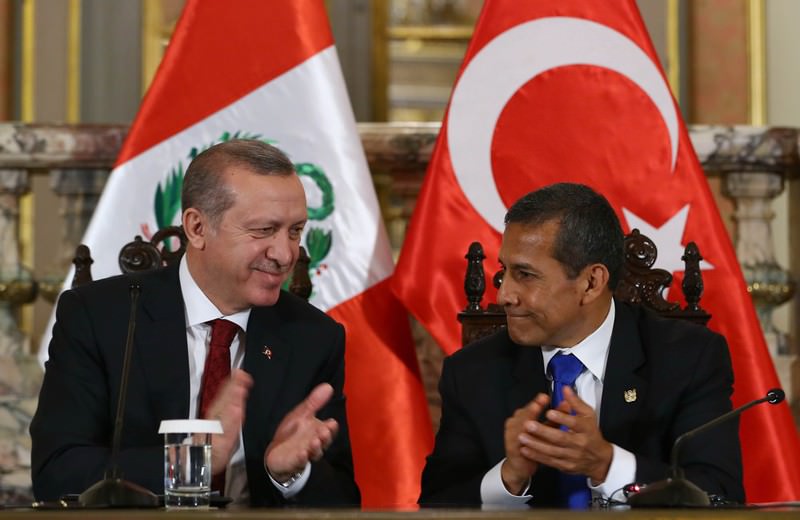 President Erdoğan's visit to Peru resulted in strengthening of economic ties with Peru. As the outcome of meetings, five agreements were penned to bring bilateral trade above $1 billion, from $260 million

Aims to boost economic relations between Turkey and Peru were at the top of President Recep Tayyip Erdoğan's agenda during his three-country tour of Latin America. Erdoğan and Peruvian President Ollanta Humala addressed the issue of economic cooperation during bilateral and inter-committee meetings. The two leaders penned five agreements with the objective to increase the bilateral trade volume by more than $1 billion in the shortest time possible - from $260 million in 2015.

Erdoğan expressed his happiness in seeing the willingness of both countries to cooperate. Stressing his pride in becoming the first Turkish president to visit Peru, Erdoğan said: "I have to say that we are rather late in such visits." He described Peru as a prestigious country attributable to the country's strategic position in the region, its growing economy, stable democracy and cultural as well as natural beauties. Referring to the mutual opening of embassies in Turkey and Peru in 2010, Erdoğan highlighted that the move allowed bilateral relations between the two countries to quickly improve.

Emphasizing that Turkey and Peru have much to be discovered in the trade, tourism and economy and infrastructural investment sectors, Erdoğan said he will continue to monitor the actualization of all steps to be taken following the bilateral and inter-committee meetings. He also touched on the Peru-Turkey Business Forum, which is paving the way for investors from both countries to invest in each other - along with third countries - cooperatively. The president said this is possible if politicians and leaders encourage bilateral relations. "I believe that the moment we achieve this incentive, our entrepreneurs will not darken the horizon that we have broadened for them," he said.

According to Erdoğan's statements, the leaders discussed military, defense, trade, infrastructure, political, cultural and educational cooperation. He said Peru has many opportunities in the mining and energy sectors, and that the two leaders talked about how they will initiate collaborative work in these areas. Erdoğan also invited Humala to visit Expo 2016, a horticultural exhibition that will be held in Antalya between April and October.

Humala stressed that Erdoğan's visit to Peru was of great importance because he is the leader of a country that hosted the G20 Summit in 2015 and one of the world's 20-largest economies. He said Erdoğan's visit will also support the finalization of a free trade agreement between the two countries. According to Humala, the two leaders discussed the state of the global economy and spoke of their individual efforts to create new markets to launch projects, a proposal that would counteract the shrinkage of the global economy. Emphasizing that economic integration procedures should be accelerated, Humala invited Turkish firms to participate in Peruvian projects that will be conducted with the cooperation of the public and private sectors.

Humala said Peru is scheduled to host the Pan-American Games in 2019, adding that they will construct the "Peruvian Olympic City" where more than 8,500 young athletes will participate in the games. He added that Peru is seeking funds for sports projects, where it will invest nearly $20 billion, and invited Turkish companies to invest in the country as well. "I pledge that we will treat them the same way we treat Peruvian companies," he said.

Chile, the first stop on President Recep Tayyip Erdoğan's tour of Latin America, is a net-exporting country thanks to years of trade surpluses, except for 2012 and 2013. Since 2011, Chile's trade volume increased remarkably from the range of $40-$70 billion it reached a decade ago, and now fluctuates around $150 billion, particularly since signing Free Trade Agreements (FTA) with several countries. Mining and agricultural products are Chile's main export goods. Despite the FTA signed with Turkey in 2011, considering the size of Chile's domestic economy ($330 million according to International Monetary Fund [IMF] data in 2015) and distance as major factors, Turkey is not among Chile's major trade partners. Turkey sells mainly steel and motor vehicles to Chile.

Peru's trade with Turkey is similar, as Peru has a GDP of $203 billion and will be the second country Erdoğan will visit as part of his visit to the continent, with Ecuador planned as his third destination. Turkey exports steel and steel products to Peru, while importing mainly non-processed zinc and plant seeds. Given distance and a GDP of $193 billion, Ecuador, is not a major trade partner either, with the main goods imported to Turkey including bananas and coffee. Meanwhile, the Turkish export sectors most popular with the Latin country are steel and steel products, home appliances and motor vehicles.
RELATED TOPICS