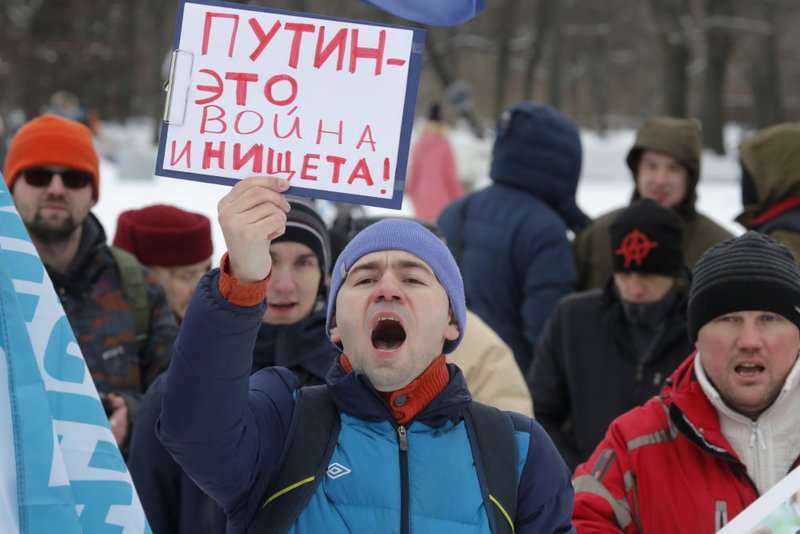 by Daily Sabah Feb 09, 2016 12:00 am
More Russians may hit poverty line as economic conditions worsen. Russia seems to be destined to face a social atmosphere of chaos if the economy, suffering the consequences of Moscow's adherence to aggressive foreign policies as well as tumbling oil prices, continues to recede in the near future. According to a report by the Higher School of Economy, Russian citizens may see their patience run out in one-and-a-half years, resulting in foreseeable mass demonstrations - a prediction that takes into consideration the hard effects of the economic crisis on Moscow's young qualified workers and the residents of local suburbs.

According to data from the RBC agency, at a conference organized by the public opinion poll research company Yuri Levada, the "depressive mood" of Russians has gotten worse since research began last year.

Professor Natalya Tihovaya, who gave information regarding the report, noted that the deteriorating welfare conditions of the public - suffering the damage of the economic crisis - will likely participate in uprisings and protests in another year-and-a-half.

Other research suggests feelings of resentment, rage, despair and overall hate towards one's surroundings have been increasing among Russia's public, and consequently the general public has become increasingly hostile and aggressive.

The report states that 25 percent of the Russian population has a household income just over the established poverty line, while a further 12 percent of the population sits at the threshold of poverty.
RELATED TOPICS