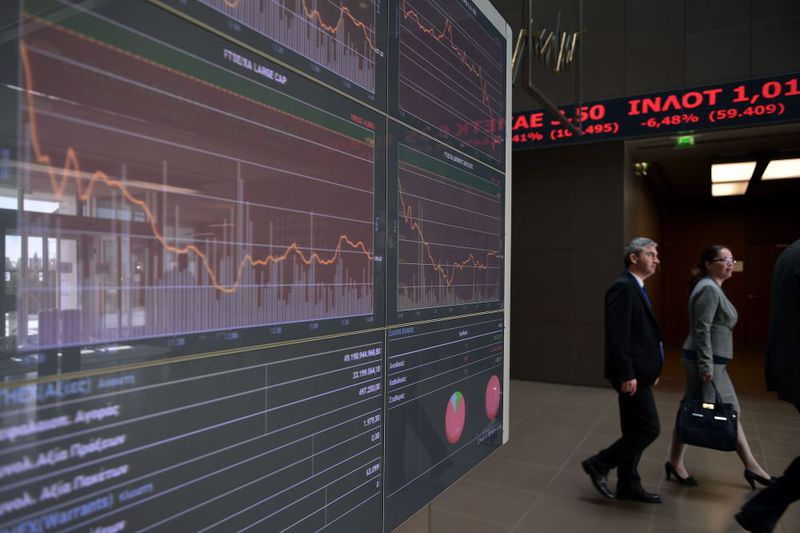 Despite danger signs flashing for the global economy, investor appetite for risk compensated for last week's sell offs. While European shares remain steady, the dollar weakened against the yen and euro

European shares held steady on Tuesday, with energy firms outpacing weak banks even as oil prices gave up early gains after an agreement among four top producers to freeze output was judged unlikely to have a big impact on a global glut of crude. The yen and the euro rose against the dollar in a sign of investor wariness after last week's sell-off of risky assets.

However U.S. stock index futures suggested Wall Street, which was closed on Monday for a holiday, would open higher.

Brent crude hit a 12-day high of $35.55 a barrel after Russia, Saudi Arabia, Qatar and Venezuela agreed to freeze output to tackle a global oil glut if other major exporters joined them. It last traded at $33.82, up 44 cents on the day, as expectations for an immediate deal faded.

"Even if they do freeze production at January levels, you've still got global inventory builds which are going to weigh on prices. So whilst it's a positive step, I don't think it will have a huge impact on supply/demand balances," said Energy Aspects analyst Dominic Haywood.

The pan-European FTSEurofirst 300 stocks index, which rose 6 percent in the last two trading days, traded in and out of positive territory and was last up 0.1 percent. The STOXX Europe 600 oil and gas index was up 0.8 percent, off earlier highs.

The banking index lost 1.2 percent. Standard Chartered fell 6.7 percent and Deutsche Bank, at the centre of investor concerns last week over the potential impact on banks of slowing economic growth and the impact of negative interest rates, fell 3.3 percent.

Earlier, Chinese stocks closed with their biggest daily percentage gain in more than three months. Remarks by Premier Li Keqiang were interpreted as hinting at more stimulus for the world's second-biggest economy, and China reported bank lending rose to a record high in January.

The impact of an economic slowdown in China has been at the heart of investor concerns that have seen world stocks drop nearly 10 percent this year.

The mood has brightened somewhat this week, although some analysts have struggled to pin down exactly why. They say such threats as slowing global growth and the spread of negative interest rates have not gone away. "You've got a market that's torn between two forces at the moment: they want risk appetite to improve, they want these markets to go up but it's clear that there's not a uniformity of view across the market," said BNY Mellon currency strategist Neil Mellor.

Premier Li Keqiang said on Monday the economy faced great challenges but that China had plenty of room to manoeuvre given its high savings rate.

In Japan, Tokyo's Nikkei index followed its 7.2 percent gain on Monday with a more modest 0.2 percent rise, led by a 16 percent surge in telecoms group SoftBank, which said it would buy back up to 14.2 percent of its own shares.

In foreign exchange markets, the dollar weakened 0.5 percent against the yen to around 114 yen. It remained well off a 15-month low of 111.99 yen hit last week, when investors piled into the yen as a safe haven and expectations faded that the

U.S. equivalents yielded 1.78 percent, compared with 1.75 percent at the close of Friday's U.S. trading session. Gold, which had its best week in four years last week, earlier dropped to $1,199 an ounce but last traded at $1,1213.