Egypt struggles to get subsidized food to poor amid dollar crisis 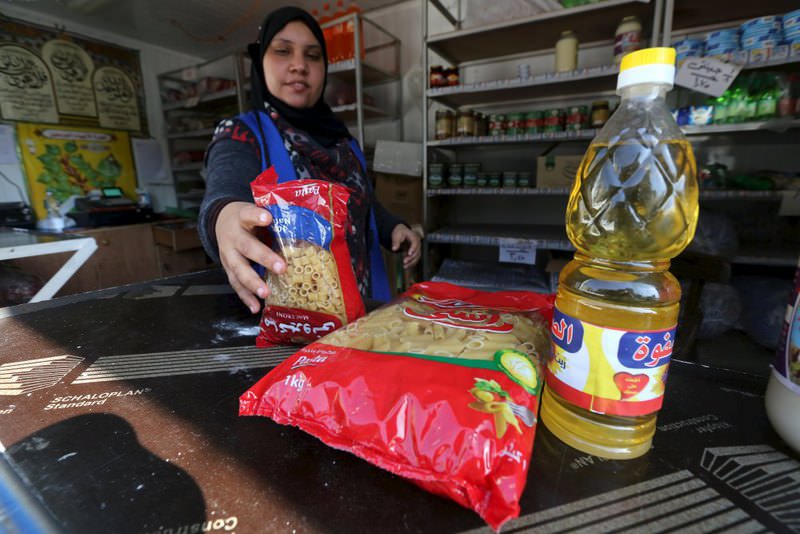 An employee sells subsidized food commodities at a government-run supermarket in Cairo, Egypt. (Reuters Photo)
by Feb 20, 2016 12:00 am

Tens of millions of Egyptians rely on state subsidies, but imported commodities like cooking oil have been in short supply as a dollar shortage makes it harder for state importers to secure regular supplies

"Any rice?" says the woman, leaning into a shop in Cairo and brandishing a green smartcard that carries her family's food credits. The shopkeeper shakes his head: "Only sugar." Behind him, more than half the shelves are empty. Rice and cooking oil are nowhere to be seen.

Tens of millions of Egyptians rely on state subsidies provided as credits on smartcards they redeem against household staples each month. But in recent weeks, imported commodities like cooking oil have been in short supply as a dollar shortage makes it harder for state importers to secure regular supplies. Shortages persist across the capital and in cities from Alexandria in the north to Minya in the south.

"When we ask the grocer he says there's nothing but sugar. Every day he says, tomorrow, tomorrow, but we are half way through the month now and it's not resolved," said Samia Mohamed, a housewife, at a grocery in southern Cairo. "Prices elsewhere are expensive. We don't know what to do."

Affordable food is an explosive issue in Egypt, where millions live a paycheck from hunger and economic discontent has helped unseat two presidents in five years. The dangers are not lost on President Abdel Fattah al-Sisi, whose government has sought to protect poor Egyptians from the worst effects of double-digit inflation. The smartcards are accepted at a network of government-run supermarkets as well as 26,000 privately owned grocers and grant each family member 15 pounds ($2) of credits a week plus five loaves of bread a day from participating bakeries. The Supply Ministry also oversees a network of stores and kiosks offering subsidized food outside the smartcard system. Goods of all kinds are available at ordinary supermarkets not participating in the smartcard scheme but poor consumers would have to fork out market prices that many can ill-afford. But even at the discount shops, stocks are low.

At a kiosk, emblazoned with the Egyptian flag and the words "together against high prices" in a historic part of Cairo, a shelf labelled "local rice, 3.25 per kilo" is bare. "Oil is in short supply. The supplies of oil aren't stable," said the manager of the kiosk, which opened in December as part

of a government effort to ease food inflation. "Sometimes we are short of rice, sometimes sugar ... Sometimes people don't like the variety. We don't get enough."

Supply Minister Khaled Hanafi said on Thursday that stocks at state food companies were being replenished with dozens of products which would be available to smartcard-holders in March.

Though essential foods are high on the priority list, a foreign exchange shortage has made it more difficult for Egypt's state food importers to pay promptly over the past year. Worst affected by the shortages has been cooking oil, with payment problems putting suppliers off bidding in state tenders.

Egypt's state importers have cancelled three cooking oil tenders in the last three months alone after not receiving enough offers or because prices were too high. Traders say they now have to factor in the cost of expected delays, particularly after the government brought in measures which mean they are not paid for up to six months.

"You are talking millions of dollars here. These delays are costly," said one trader. "They make you feel like a beggar when you chase your money, not answering calls, not responding."

Egypt has struggled to revive its economy since the 2011 Arab Spring uprising drove away tourists and foreign investors. Foreign exchange reserves have more than halved since then, leaving Egypt with scarcely enough to cover three-months worth of imports. Pressure has mounted on the central bank to devalue the pound but it has resisted a major adjustment for fear of stoking inflation. Instead, it has imposed strict limits on dollar deposits and transfers, making it harder to clear shipments.

A lack of clarity on rice policy has also caused confusion in the market. Egypt banned rice exports in 2008 but lifted the ban in October after a bumper harvest. It issued a rice import tender last month only to cancel it again and grocers say there is not enough rice in state stores.