Russia’s budget and reserve fund can run out this year, corruption is too much, Russian oligarch Deripaska says 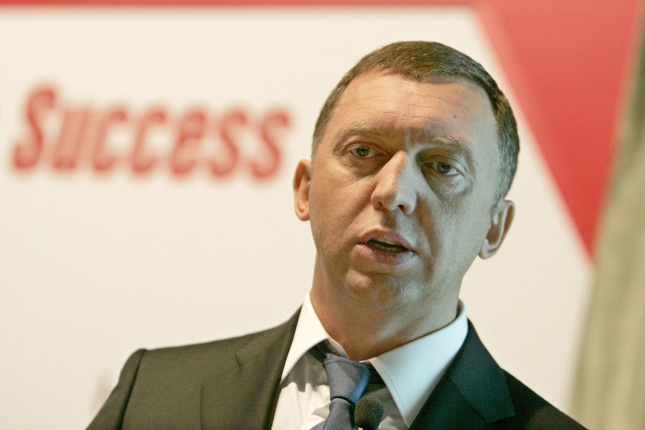 by Daily Sabah with Agencies Feb 22, 2016 12:00 am
The head of Rusal Company and one the most notable oligarchs in Russia, Oleg Deripaska, forecasted that the oil price per barrel will fall to $18 while the Russian ruble will weaken against the dollar, to 100 rubles per dollar.

He stated that Russia's budget and reserve fund can run out by the end of this year because corruption is too much.

"In such a case, we would be better off dead. We need to carry on, mindful that this might happen," he said.

According to news reported by the Russian Kommersant daily, the owner of the Rusal, which is known to be one of the world's biggest aluminum companies, the likelihood of a plummet in oil prices in high and the price could fall to $18 per barrel.

Touching on the further possible depreciation of the ruble against the dollar, Deripaska said: "It is necessary that we understand that the situation we have been experiencing will not get much better." He emphasized the importance of being realistic and taking the necessary precautions as much as possible.

Deripaska also stressed that, given the existing condition of the Russian economy, the biggest problems to be experienced by the Russian government are the high possibility of a steep decline in the federal budget and the federal reserve fund.

"Our economy is excessively dependent on external factors. Moreover, there are many other factors negatively affecting the business environment in Russia such as the judicial system, corruption, the deficiency of a reliable domestic credit market and the monetary policies implemented by the [Russian] Central Bank," he said.

Elsewhere, according to another Russian daily, Vedemosti, the Russian Finance Ministry predicts that the recession in the country could persist over the next 15 years at the least; if the required reforms are not realized and oil prices do not increase.

Predictions suggest that the Russian economy is expected to shrink 0.8 percent this year and re-achieve a growth trend again in 2017. This being the case, Russia will not be able to achieve the gross domestic product (GDP) level of 2014 again until 2020 at the earliest.