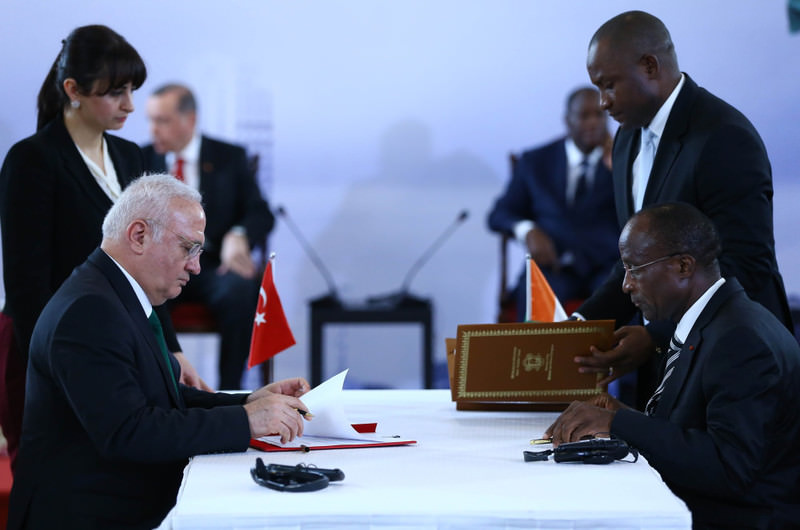 Turkey aims to achieve trade volume worth of $1 billion with Cote d'Ivoire, according to Economy Minister Elitaş. On the other hand, Ivorian Prime Minister Duncan seeks to attract more investments from Turkey in accordance with their ambitious investment plans

The Prime Minister of the Republic of Cote d'Ivoire Daniel Kabian Duncan expressed that Cote d'Ivoire is the gate opening to Africa and the country is ready for developing economic cooperation with Turkey.

Speaking at the Turkey-Cote d'Ivoire Business Forum organized by the Foreign Economic Relations Board (DEİK), Duncan said, "Cote d'Ivoire aims for $100 billion investment volume from2016 to 2020," adding that the region has great potential and provides Turkish investors with great opportunities.

The business forum was held during Turkish President Recep Tayyip Erdoğan's tour of the West African countries of Cote d'Ivoire, Ghana and Nigeria.

Noting that they have been working on the development of business cooperation between Turkey and Cote d'Ivoire - and that the Forum reflects Turkey's liberal and reformist economic structure - Duncan underlined the importance of the minister of Cote d'Ivoire's visit to Istanbul, noting that it contributed significantly to the development of relations. Duncan added that the business forum will contribute even further in this respect.

Prime Minister Duncan also highlighted that Cote d'Ivoire wants to benefit from the inspections in the field of agriculture by Small and Medium Enterprises (SMEs) in Turkey in order for Turkish SMEs to help the private sector in his country focus on the production of cocoa, coffee, vegetables and fruits.

In addition, Turkey's Economy Minister Mustafa Elitaş stressed that the two countries have similarities in many respects; namely, they are economic and logistical powers in their respective regions. Minister Elitaş also drew particular attention to the fact that both countries are attracting international investors with an investment-friendly environment supported by the reforms and regulations put into effect, adding that Turkey is sensitive in developing its relations with Cote d'Ivoire.

Elitaş spoke in numeric terms about the development of commercial ties with Africa, saying that in 2003, the trade volume of Turkey with Africa was $5.4 billion while it became $19.5 billion in 2015. He added that, in the same period, the total investments amounted to $6.2 billion and the construction services delivered by Turkish firms exceeded $55 billion.

Elitaş noted that cooperation in the investment and construction sectors will continue to gain momentum, saying, "We have been continuing our negotiations for the signing of reciprocal incentive given to investments and the preservation of the investment deals as well as for the lifting of double taxation. I hope that, in the near future, we will be announcing positive developments in this respect."

Erdoğan, who expressed Turkey's objective in Africa as "building bridges on the basis of mutual respect and appreciation," seeks to grow the economies of Africa and Turkey by engaging in deeper cooperation regarding the economy and foreign policy on the global stage. Businessmen accompanied the president, industrialists, exporters and investors, all aiming to further diversify their markets and tap into the enormous potential of Africa.

Erdoğan's visits started with Abidjan, the commercial capital of the largest economy in the West African Economic and Monetary Union (WAEMU), which includes Benin, Burkina Faso, Guinea, Mali, Niger, Senegal and Togo. The country succeeded in reaching an average growth rate of 9 percent after the 2011 crisis. Turkey's exports to Cote d'Ivoire have been increasing in the last 10 years, but still couldn't reach the desired level and became $117 million in 2015.
RELATED TOPICS