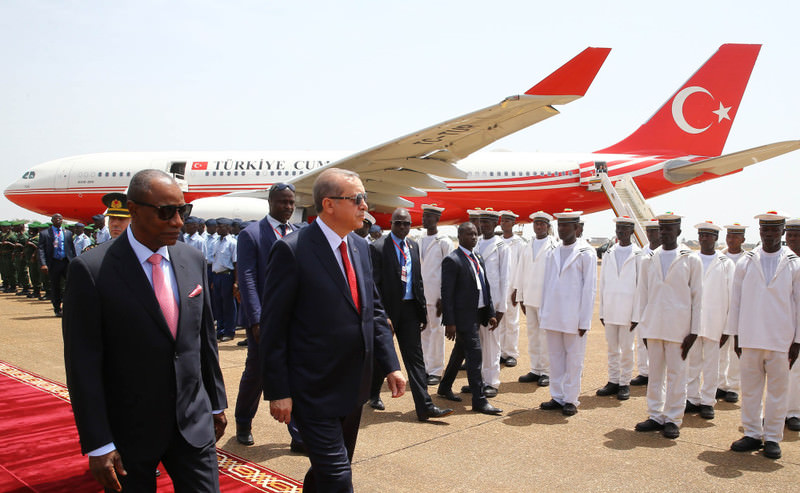 As part of his West African tour, President Recep Tayyip Erdoğan visited Guinea, where he met the country's top officials with the aim of fostering political and economic relations between Turkey and Guinea. After meeting with Guinean President Alpha Conde to discuss bilateral relations as well as regional and global issues, Erdoğan attended the Turkey-Guinea Business Forum to enhance the flow of investments and cooperation between Turkey and Guinea.

Erdoğan began his West African tour in Ivory Coast on Monday. Turkey aims to increase its trade volume with Ivory Coast to $1 billion by 2020, Erdoğan said during his first visit to the West African country. Erdoğan made the announcement alongside his Ivorian counterpart, Alassane Ouattara, at a joint press conference Monday after holding bilateral meetings in the country's economic capital, Abidjan. The president hopes the trade volume between the two countries will increase over the years. "Trade volume between Turkey and Ivory Coast was $330 million last year. It will reach $390 million in 2016. Our goal is to increase it to $1 billion by 2020," he said. He stressed that bilateral ties began in 1964, while the Turkish Embassy in Abidjan opened in November 2009. Turkey provides humanitarian aid to Ivory Coast through the Turkish Cooperation and Coordination Agency (TİKA) and the Turkish Red Crescent.

Erdoğan's second stop was an official visit to Accra, Ghana, on Tuesday. Erdoğan held individual and bilateral meetings with Ghanaian President John Dramani Mahama, and signed agreements for the mutual protection of investments and collaboration in terms of youth and sports as well as memorandums of understanding in the information technology and energy sectors.

Stressing that Ghana and Turkey have signed 18 agreements and memoranda over the past five years, Erdoğan said: "I believe that the agreements and memoranda signed on the occasion of my visit will solidify our current and future collaboration. Both Turkey and Ghana are determined to expand mutual cooperation. There is a very obvious political will between us to do that."

Citing that current total trade volume between Turkey and Ghana is at $400 million, he said: "I believe that we will raise this amount to $1 billion by 2020. We are here with more than 150 firms. Our firms are determined to directly contribute to Ghana's efforts for economic development in the energy, infrastructure and housing development and construction sectors in line with Ghana's needs," Erdoğan said.

Erdoğan also visited Nigeria on Wednesday, where he emphasized the importance of developing strong economic and political ties with Nigeria during his visit to the country. He met with Nigerian President Muhammadu Buhari, and held individual and bilateral meetings with officials. At a press conference, Erdoğan said the Turkey-Nigeria Business Forum will contribute to the strengthening of bilateral economic relations, which will result in the increase in investment flows between the two countries as well as raising the trade volume. "I encourage Turkish businesspeople and entrepreneurs to invest in Nigeria," Erdoğan said, adding that Turkey will contribute to the development of the country through infrastructural investments in a number of fields such as construction.

Nigerian businesspeople were in Abuja to meet with potential Turkish partners. A large delegation of Turkish businesspeople accompanied Erdoğan in the Nigerian capital of Abuja and throughout the West African tour to hold business-to-business meetings. The reciprocal promotion and protection of an investment deal is one of the agreements on the agenda.
RELATED TOPICS