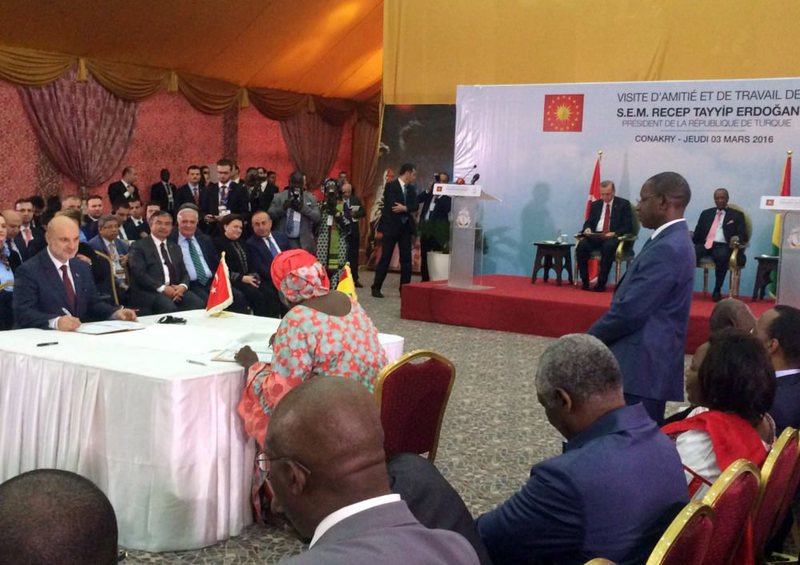 by Daily Sabah with AA Mar 05, 2016 12:00 am
President Recep Tayyip Erdoğan signed nearly 30 memorandums of understanding and agreements covering the fields of urbanization, education, energy, industrialization and economy during his visit to four African countries: Cote d'Ivoire, Ghana, Nigeria and Guinea from Feb. 28 to March 4. Speaking to Anadolu Agency (AA) regarding President Erdoğan's West Africa visit, Foreign Economic Relations Board (DEİK) President Ömer Cihad Vardan said, "Everybody fell in line in front of the desks of our businesspeople," emphasizing that bilateral meetings in Cote d'Ivoire and Ghana were very positive.

During the business forums organized by DEIK, 500 businesspeople from Cote d'Ivoire, 450 from Ghana and 300 from Nigeria attended meetings in the fields of potential investment and trade, with special meetings held in Guinea. Energy, construction, infrastructure, sewer systems, water treatment, the cacao trade and agriculture were amongst the subjects discussed during bilateral meetings held between the aforementioned countries and Turkish businesspeople.

Indicating that Turkey has had problems doing business despite great potential, Vardan said: "We need to scatter our investment and expand to new horizons. Right now, we are going to regions such as Africa out of necessity, but this necessity will open different horizons for us. This is an important step for Turkey to globalize and open up to the world."

Vardan emphasized that Turkey does not just sell or purchase goods, but has started investing. "The biggest problems start with these investments. We present goals to these countries, and in this context, there has to be some facilitations in terms of overcoming the obstacles. It is really important for all of us to see these obstacles handled on the level of presidents and prime ministers and to see them putting their efforts accordingly." Vardan added that nearly 200 Turkish businesspeople would accompany Ahmet Davutoğlu on his visit to Iran starting on Friday.
Last Update: Mar 05, 2016 10:26 am
RELATED TOPICS