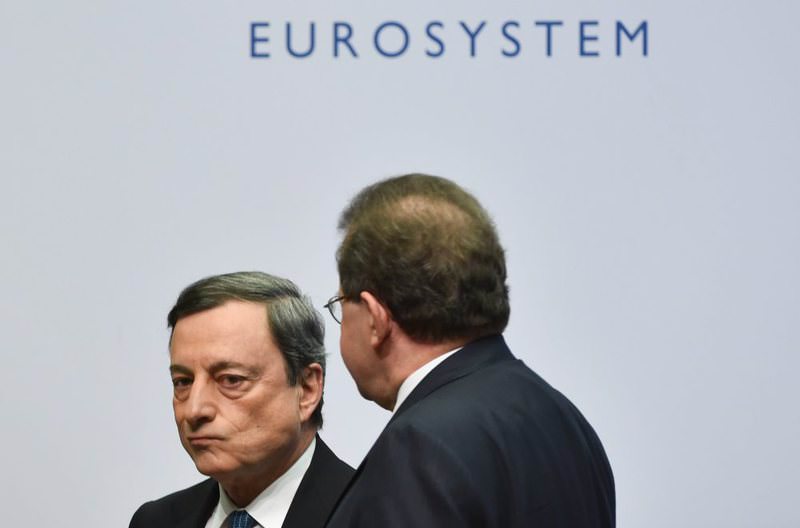 The European Central Bank cut all its main interest rates, expanded its bond-buying stimulus program, and offered new cheap loans to banks, making an unexpectedly aggressive effort to boost inflation and economic growth in the 19 countries that share the euro. The steps on most counts exceeded expectations, suggesting the ECB was determined to avoid the market disappointment that followed its Dec. 3 meeting, when it was seen as having done less than hoped for. Stock markets surged Thursday after the ECB's announcement.

Draghi told a news conference that the measures "will reinforce the momentum of the euro area's recovery" and hasten the return of inflation toward the target of near 2 percent.

The moves come amid broader doubts among economists about whether central bank stimulus efforts globally are reaching the limits of what they can do to spur growth.

At yesterday's meeting the ECB: Cut its main benchmark rate to zero from 0.05 percent, a mostly symbolic step, lowered the rate on deposits from commercial banks at the central bank to minus 0.40 percent from minus 0.30 percent, an unconventional move aimed at pushing banks to lend rather than hoard cash, increased its monthly bond purchases to 80 billion euros ($88 billion) from 60 billion euros, pushing more newly printed money into the economy, added corporate bonds to the assets it can buy, expanding the potential scope of the purchase program, announced long-term cheap loans of up to four years to help support banks.

The negative rate on deposits in essence, a tax on bank's excess funds is an unusual step aimed at pushing banks to lend rather than leave money at the central bank. More lending would promote growth and push up inflation from a worryingly low annual rate of minus 0.2 percent. The rate cut and the other measures to expand stimulus underline how far the ECB sees itself from achieving its goal of inflation of just under 2 percent. The bond purchases are paid for by adding newly created money to bank's reserve accounts at the central bank, in the hope that the money will then find its way into the economy through more and cheaper loans. Increasing the money supply is one way to try to lift inflation.

Low or negative inflation has raised fears that Europe may become stuck in an economic quagmire known as deflation, in which stagnant prices weigh on wages, investment and economic growth for years. And more trouble in Europe just as it seems to finally be recovering from the debt crisis that led to bailouts in Greece and other countries is the last thing the global economy needs.

Europe is a key market for major companies, from automakers Ford and General Motors to technology companies Apple and Samsung. A slide in growth would compound woes from slowing growth in many parts of the world, particularly China. Yet the ECB's cut of the deposit rate below zero also deployed by central banks in Japan, Denmark, Switzerland and elsewhere has raised fears of side-effects, in particular that it could dent bank profits. Weak banks are less likely to lend, defeating the purpose of the measure.

The ECB's policies have driven market interest rates below zero as well, pushing investors into a topsy-turvy world in which they are expected to pay for the privilege of loaning someone else money. The German government can borrow money at minus 0.54 percent for two years.

Such negative rates have raised fears about the health of banks, since they hit bank profits. The new round of cheap loans to banks appears aimed at easing those concerns. Four Italian lenders needed a bailout last year. Share prices have fluctuated violently for big European banks such as Deutsche Bank and Credit Suisse after they posted big losses for last year.

One key effect of negative rates and bond purchases has been a lower euro. The ECB insists it does not use monetary policy to send the currency lower, but the euro has fallen to around $1.10 from around $1.40 in 2014 before markets began to anticipate the bank's current effort at unconventional stimulus through bond purchases, called quantitative easing, or QE, launched in March 2015. A subsequent stimulus increase at the Dec. 3 meeting had less effect on the euro, however.

Cutting rates to deeper levels in the eurozone also puts pressure on the ECB's neighbors. Sweden and Switzerland also have negative rates, in an attempt to keep money seeking higher returns from surging in from the euro countries and driving up their currencies' exchange rates.

Yet despite such unconventional measures such as negative rates, central banks in Europe, Japan, the United States and elsewhere have had little luck recently in pushing up inflation. The Bank for International Settlements, an international organization of central banks, said in a report Sunday that central bank policies were reaching their limit.

The BIS and many economists say that the key to boosting global growth must come from governments spending more and tackling the obstacles to growth in their own economies. So-called structural reforms would include clearing away regulation that makes it hard to start a business and excessive employee protections that make companies reluctant to hire in the first place.