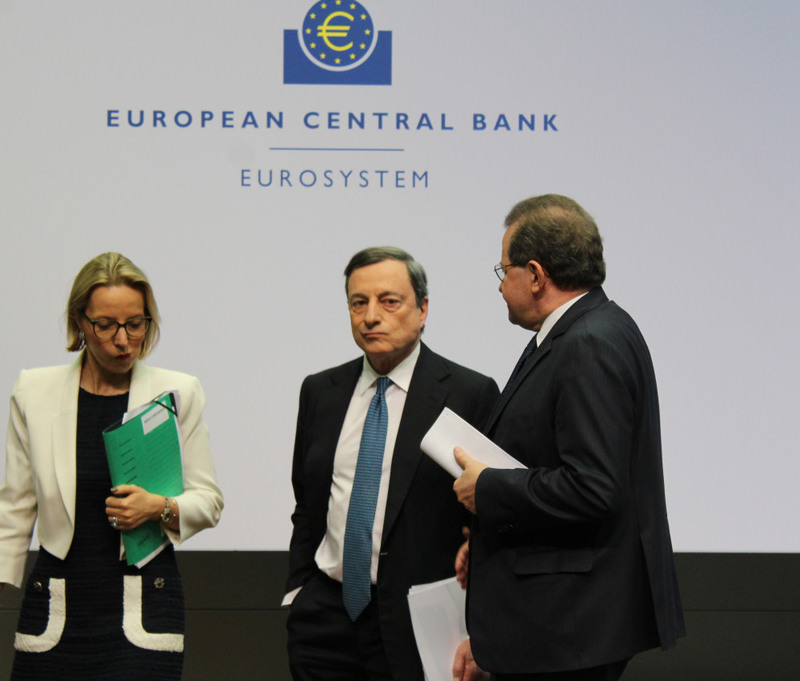 A simmering war between European Central Bank (ECB) President Mario Draghi and Germany erupted into the open on Friday after the bank unleashed an unprecedented stock of ammunition to light a fire under chronically weak inflation.

The Italian central banker, who heads the ECB, was portrayed on the front page of Germany's influential business daily Handelsblatt with a cigar on his lips and holding a 100-euro bill that was going up in flames. Bild daily referred to Thursday's announcement as a "shock," while the federation of exporters called the decision "disastrous" and "a robbery of savers."

On Thursday, the ECB slashed already record-low interest rates even further and said it would pump massive new sums into the banking system. It was also announced that the ECB would start buying corporate bonds for the first time. The aim is to get credit flowing to households and companies thereby inducing them to spend and invest. But it also means that putting money in a bank will no longer pay. For a nation of savers like Germany, that is nothing short of a capital sin.

Handelsblatt railed against "Mario Draghi's dangerous game with German savers' money" in a commentary that gave the impression the policy was meant to hurt Germans and Germans alone. It felt all the more personally targeted because Germans had it "drummed in their heads for years that they should save for their retirements," Carsten Klude, economist at the bank M.M. Warburg, told Agence France-Presse (AFP).

In a country where the population is ageing, and where the pension system is more vulnerable to shocks, public institutions have traditionally offered the people strong incentives through tax rebates, for instance to squirrel money away.

German bank accounts also often offer competitive interest rates. "But now people see that saving does not pay. And they feel cheated," Klude said. "The German position is understandable," said Sylvain Broyer, economist at Natixis. Broyer estimates that the country needs an interest rate of around 2.0 percent rather than zero in order to maintain macro-economic stability. He noted that the cheap money policy has driven Germans to invest in property, thereby sending prices up sharply in recent years.

At the same time, Europe's biggest economy also benefits from the ECB's actions. After all, it was Draghi who saved the eurozone in 2012 and got Germany's big clients - other European countries - to carry out badly needed reforms, Klude said. But these advantages are less tangible than the immediate impact of rate cuts on individuals.

Germany, which has been the thorn in the side of highly indebted countries like Greece and Italy for insisting on budgetary rigor, fears that the ECB's ultra-loose monetary policy will not encourage the EU's economic laggards to carry out reforms. Both Finance Minister Wolfgang Schaeuble and Bundesbank chief Jens Weidmann have repeatedly voiced their misgivings. Weidmann even went as far to publicly declare his criticisms of the ECB's policy just days after the bank launched its first round of quantitative easing in January last year.

Draghi has until now been silently soaking up the criticisms. But he delivered a stinging retort on Thursday during a press conference, after announcing the ECB's latest slew of measures. "Suppose we had embraced what two years ago I used to call the 'nein zu allem' policy strategy, so do nothing. What would be the counter factual? The counter factual would have been a disastrous deflation," he said, using the German phrase to single out his target. That was not lost on observers.

Spanish daily El Pais called the veiled attack "the ECB's most important message." Marcel Fratzcher, president of German institute DIW, said: "We should not forget that the ECB has the mission to determine the monetary policy for the entire Eurozone, not just Germany." Klude observed, "We are trapped in the logic of national interests, and each is trying to see 'what does that mean for me.' "

In this war against Draghi, it looks like Germany is starting to find some allies. The Dutch press on Friday bemoaned the plight of savers, while in Finland, tabloid Ila-Sanomat blasted the ECB's monetary policy, which it said allows "Italy to survive despite its mountain of debt" while the Finnish economy "was struggling."