Thousands march for $15 hourly wages across US 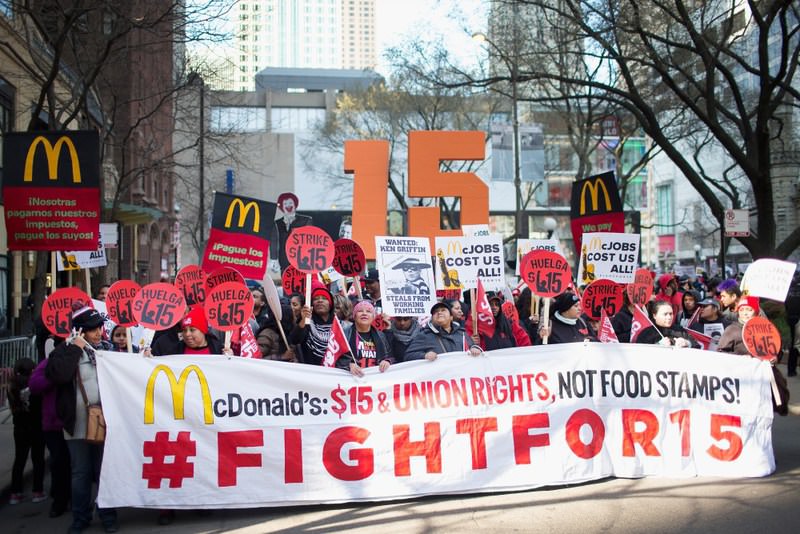 by Apr 16, 2016 12:00 am
Thousands of low-wage workers marched in New York, Los Angeles and other U.S. cities on Thursday calling for minimum pay of $15 an hour in a cause that has scored major legislative victories in California and New York state in recent weeks. The union-backed "Fight for $15" campaign has expanded since its inception in 2012 from a movement mostly centered on the fast-food industry to encompass other low-wage sectors, such as home health care, retail outlets and hospitals. Much of the attention in Thursday's rallies, in what some organizers called a national day of action, was on McDonald's Corp fast-food eateries, the world's biggest restaurant chain by revenue.

Demonstrators said they want to get to a $15 minimum in any they can, whether that happens at the state or city level or even via individual companies. In New York City, demonstrators rallied in Times Square and later protested outside a Republican gala featuring the party's three candidates for the 2016 presidential race, while in Los Angeles protesters held aloft large balloons and marched behind a banner that read, "McJobs hurt us all."

Governor Andrew Cuomo spoke at the rally in Times Square, on a day that also saw Democratic presidential candidates Hillary Clinton and Bernie Sanders express support for the marchers. On the West Coast, organizers said more than 2,000 people marched through downtown Los Angeles. Anggie Godoy, 20, a cashier at a McDonald's in Los Angeles, said the campaign to raise wages must be national in scope.

"We know that it's not just New York and California struggling, but it's everyone in our nation," she said. And even though California and New York have recently passed legislation to raise their state minimums to $15, protesters said those measures aren't enough because both states will take time to phase in the increases. Similar demonstrations in dozens of other U.S. cities, including Chicago and Miami, drew thousands of workers to the streets, organizers said. Protests were also held overseas, including at a McDonald's at Disneyland Paris and outside the headquarters for the South Korea division of the fast-food giant, organizers said.

Last year, McDonald's raised its employees' base pay at company-owned U.S. outlets by $1 over the locally mandated minimum wage. That measure does not affect the employees of the almost 90 percent of McDonald's restaurants run by franchisees. Earlier this month, both California and New York enacted $15-an-hour minimum wage laws, going beyond the federally mandated $7.25-an-hour wage floor that has been in effect nationally since 2009.