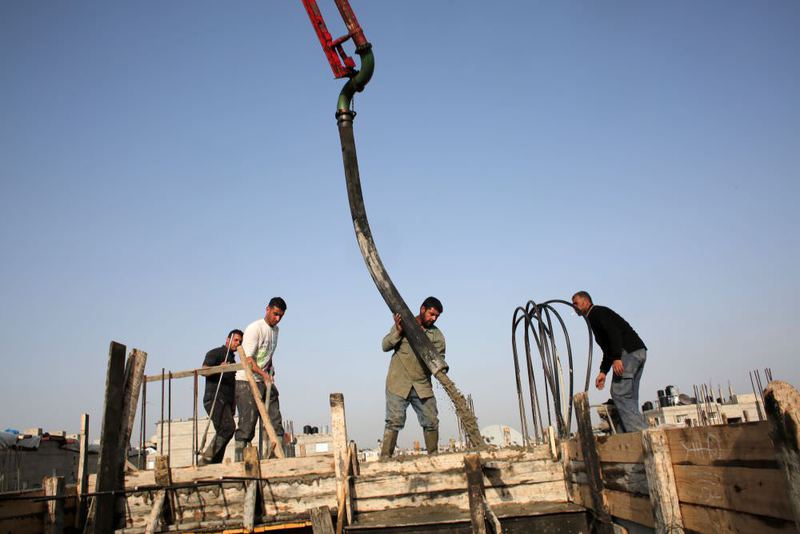 Palestinian workers pour cement on the roof of a building under construction in the southern Gaza Strip town of Rafah. Israel announced it had stopped private imports of cement to the Hamas-run Palestinian enclave.
by Apr 19, 2016 12:00 am

The Palestinian economy is losing hundreds of millions of dollars every year over outdated or insufficiently enforced fiscal agreements with Israel, a World Bank report said yesterday. The lost revenue of $285 million annually was equivalent to 2.2 percent of Palestinian Gross Domestic Product, according to the report prepared ahead of the bi-annual meeting of the Ad Hoc Liaison Committee (AHLC) which coordinates international donor support for the Palestinians. The Ramallah-based Palestinian Authority (PA) "suffers from substantial revenue losses under the current revenue sharing arrangements outlined by the Paris Protocol", the report said of the 1994 agreement, which governs economic ties between Israel and the Palestinian territories. It said most of the losses are a result of "tax leakages on bilateral trade with Israel in addition to undervaluation of Palestinian imports from third countries".

The World Bank also noted the handling fees Israel takes for imports en route to the Palestinians, which at the current rate of three percent "significantly outstrips costs incurred by (Israel) to handle Palestinian imports", recommending that the rate be reduced to 0.6 percent. The World Bank said it could not quantify the losses to the PA because of a lack of access to Israeli data.

The Palestinian Authority has also so far failed to open a "dedicated fund" to receive $669 million in pension payments collected by the Israeli government for Palestinians working in Israel. The World Bank noted recent meetings between Israeli and Palestinian finance ministers over the issues, and Israel's commitment to transfer $128 million to "offset some of the PA's losses", calling it "highly encouraging as a first step".

"Reviving the Israeli-Palestinian Joint Economic Committee, originally set to monitor implementation of the Paris Protocol and resolve outstanding issues, could significantly enhance economic and fiscal cooperation between the parties," it said in a statement. Resolving outstanding financial "issues" between Israel and the Palestinians could not only "ease the PA's fiscal stress" and improve its economy but might even "facilitate progress on the political front", the report said. The Israeli finance ministry said it ensures that the Paris accords are implemented and has made reductions in its handling fees totaling around $21 million.

Earlier this month, Israeli and Palestinian officials agreed to end several days of rolling blackouts in the occupied West Bank over what Israel says is some $450 million in arrears for electricity supplied by Israel. The World Bank report was set to be presented to the AHLC on Tuesday in Brussels.
RELATED TOPICS