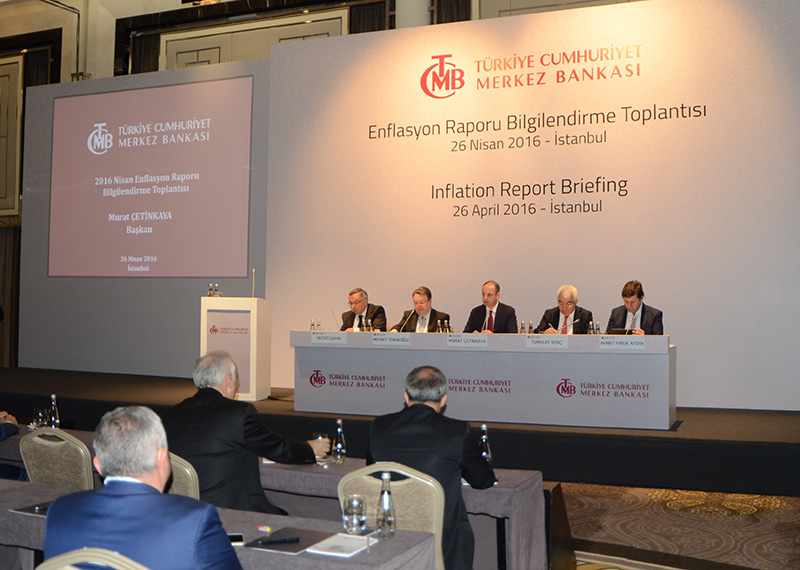 Stressing the need for wide interest corridor decreases, new central bank governor Çetinkaya said switching to a single interest rate will end discussions over monetary policies, an aim which they intend to achieve at a reasonable pace

The Central Bank of the Republic of Turkey's (CBRT) new governor Murat Çetinkaya stressed that as long as the CBRT does not switch to a single interest rate policy, discussions over the monetary policies will continue.

While the latest inflation report released Tuesday from the CBRT left their annual inflation forecast at 7.5 percent, Çetinkaya said the CBRT will continue simplifying its monetary policy as much as possible given global and domestic conditions, saying "Within the aforementioned single policy rate framework, we aim to reach the level of a narrower and more symmetric [interest rate] corridor."

This signal by the CBRT towards simplification of the monetary policy has consolidated market expectations for a switch to the use of a fixed interest rate as an indicator in the near future, rather than the current system of three interest rates, in which there is also an interest rate corridor whose upper and lower limits are determined by the CBRT's decision.

Çetinkaya said the bank favors a simpler and more foreseeable monetary policy for the upcoming period in order to achieve the basic objectives of central banking, namely ensuring price stability as well as consolidating economic stability. He added that regarding monetary policy simplification, the CBRT considers mainly global factors along with other factors affecting inflation. Çetinkaya noted every member of the Monetary Policy Committee (MPC) agrees with the clear idea of achieving the monetary simplification at a reasonable pace. Given the favorable global conditions, Çetinkaya said the need for a wide interest rate corridor has decreased in line with declining global volatility.

In its second Annual Inflation Report concerning 2016, the CBRT held its annual inflation forecast constant at 7.5 percent, in accordance with the Medium-term Economic Plan (MEP) prepared by the government. In light of good developments on the global scale, keeping tight limits on foreign exchange liquidity, preserving the tight stance in the overall liquidity and considering the pricing behavior, Çetinkaya said the CBRT estimated annual inflation at 7.5 percent. He added the decline in food prices is expected to continue in the short run, saying the CBRT preserves its year-end food inflation forecast for 2016at 9 percent and for 2017 at 8 percent. In March, thanks to the unexpected fall in food prices, annual inflation dropped to 7.46 percent from 8.78 percent.

While Çetinkaya affirms that the CBRT will keep a tight stance in monetary policy, he transmitted some important messages as well. The CBRT foresees that the annual credit growth rate will continue at reasonable levels. Due to service sector inflation and cumulative effects of foreign exchange, there has not been an improvement in the core inflation. Another notable message is that in comparison to the last quarter's Gross Domestic Product (GDP), economic activity is now in accordance with the inflation report in January. The CBRT also expects economic activity to be stronger in 2016 compared with the previous year. The final message from the governor is that the reduction in uncertainties arising from domestic issues, as compared to 2015's roller coaster, might contribute to a rise in domestic demand.