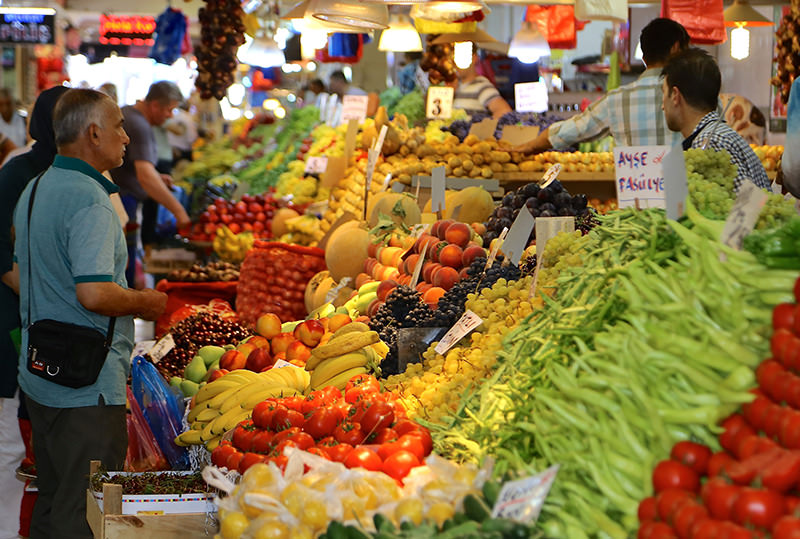 Turkey's consumer price index (CPI) increased by 0.78 percent in April 2016, significantly below the forecasted 1 percent, marking the inflation level at 6.57 percent on an annual basis, according to data released by Turkish Statistical Institute (TurkStat) on Tuesday. The CPI increased by 2.55 percent since December 2015.

This level marked the lowest inflation for the Turkish economy since May 2013, when violent anti-government Gezi Park protests shook the country.

The declining inflation is expected to support the interest rate cuts planned by the Central Bank of the Republic of Turkey (CBRT) in order to back economic growth, in line with the fiscal policies designed by the government.

The annual inflation figure in April is also much lower than estimates of around 8.05 percent and the 7.5 percent annual target set by both the CBRT and the Medium-term Economic Plan (MEP) prepared by the government.

Thereby, with the considerable decrease in annual inflation backed by the latest data in April, annual inflation declined for four consecutive months, paving the way to a potential green light for the CBRT to continue rate cuts.

The CBRT has repeatedly linked further interest rate cuts to improvements in the inflation outlook despite the fact that, in March and April, it introduced a few measured rate cuts totaling 75 base points to cut the upper bound of the interest rate corridor.

Cuts in interest rates are critical for government officials, who consider high rates to be a factor that hinders economic growth, stressing that economic growth must be more than 4 percent to slow the rise of unemployment rates.

Also, after the CBRT established short-term interest rates at the latest MPC meeting, Economy Minister Elitaş said he expects the CBRT to take firmer steps to compel markets to make more investments, implying that he hopes for a further decline in interest rates by the next monthly MPC meeting.

While officials debated interest rate cuts, the CBRT published a press release indicating that a decline in global volatility is ongoing and global financial conditions have improved. In line with these developments, the effective utilization of policy instruments in the road map published in August 2015 has since lessened the need for a wide interest rate corridor. Therefore, the MPC decided to take a cautionary step toward monetary simplification.

While lowering the interest rates, the CBRT factors in the recent declining trend in inflation. When Turkey's annual inflation rate fell to 7.46 percent in March due to a sharp drop in food prices, the CBRT said, in its report published in April, this decline is expected to continue in the short-term, adding that improvements in the underlying core inflation trend remain limited, requiring the maintenance of a tight stance on liquidity. Regarding future monetary policy decisions, the CBRT emphasized that its bank's monetary stance will be determined by the inflation outlook, emphasizing that inflation expectations as well as pricing behavior must be taken into consideration to maintain the tight stance on monetary policy.

The highest average price increase in April was in clothing and footwear with 12.60 percent. Prices rose in education category by 0.87 percent, followed by recreation and culture with 0.76 percent, furnishings and household equipment with 0.70 percent and transportation with 0.62 percent.

The only monthly decrease was in food and non-alcoholic beverages category as prices decreased by 1.48 percent. The increase in food prices had been the most important factor triggering the inflation in Turkey.

The highest annual increase was in alcoholic beverages and tobacco category with 12.84 percent.

Hotels, cafes and restaurants, miscellaneous goods and services, furnishings and household equipment and health were the other main categories where high annual increases took place with respective increases of 11.35, 11.25, 10.38 and 9.58 percent.

The highest monthly price increases were in southern Hatay, Kahramanmaraş and Osmaniye with an average rate of 1.49 percent. The highest increases in CPI compared to December 2015 were recorded in Ankara and Adana - Mersin regions with 3.26 percent.