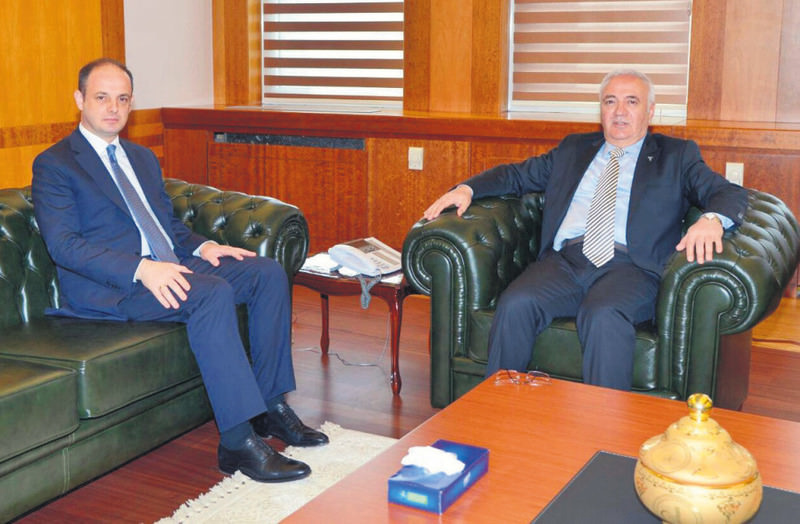 Central Bank of the Republic of Turkey (CBRT) Governor u00c7etinkaya (L) and Economy Minister Elitau015f met yesterday to share ideas about the proposed interest rate cut.
by Daily Sabah May 03, 2016 12:00 am

Central Bank of the Republic of Turkey (CBRT) Governor Murat Çetinkaya and Economy Minister Mustafa Elitaş met Monday in order to share ideas regarding the interest rate cut. According to an announcement made by the Economy Ministry, the meeting held at Elitaş's office addressed issues that included the general economic situation, lower short-term interest rates and other common policies that could help enhance the coordination of fiscal and monetary policies to support economic growth and the relevant steps regarding these issues.

Interest rates have been a hot-button issue between the government and CBRT since early 2014, when then-Prime Minister Recep Tayyip Erdoğan criticized the central bank for keeping interest rates high.

Government officials also consider high rates to be a factor that is hindering economic growth, stressing that economic growth must be more than 4 percent to slow the rising unemployment rates.

On April 20, the CBRT Monetary Policy Committee - presided over for the first time by Çetinkaya - cut the upper interest rate (the marginal funding rate) by 50 base points on Wednesday to 10 percent from 10.50 percent, leaving the lower rate (overnight borrowing rate) and policy interest rate (one-week repo rate) unchanged at 7.25 percent and 7.50 percent, respectively.

Also, after the CBRT established short-term interest rates at the latest MPC meeting, Elitaş said he expects the CBRT to take firmer steps to compel markets to make more investments, implying that he hopes for a further decline in interest rates by the next monthly MPC meeting.

While officials debated interest rate cuts, the CBRT published a press release indicating that a decline in global volatility is ongoing and global financial conditions have improved. In line with these developments, the effective utilization of policy instruments in the road map published in August 2015 has since reduced the need for a wide interest rate corridor. Therefore, the MPC decided to take a cautionary step toward monetary simplification. The CBRT also factored in the recent declining trend in inflation. While Turkey's annual inflation rate fell to 7.46 percent in March due to a sharp drop in food prices following a harrowingly close path to the 7.5-percent target previously set for this year by the government's Medium-Term Economic Program (MEP), the CBRT said this decline is expected to continue in the short-term, adding that improvements in the underlying core inflation trend remain limited, requiring the maintenance of a tight stance on liquidity. Regarding future monetary policy decisions, the CBRT reported that its bank's monetary stance will be determined by the inflation outlook, emphasizing that inflation expectations as well as pricing behavior must be taken into consideration to maintain the tight stance on monetary policy.
Last Update: May 03, 2016 1:19 am
RELATED TOPICS