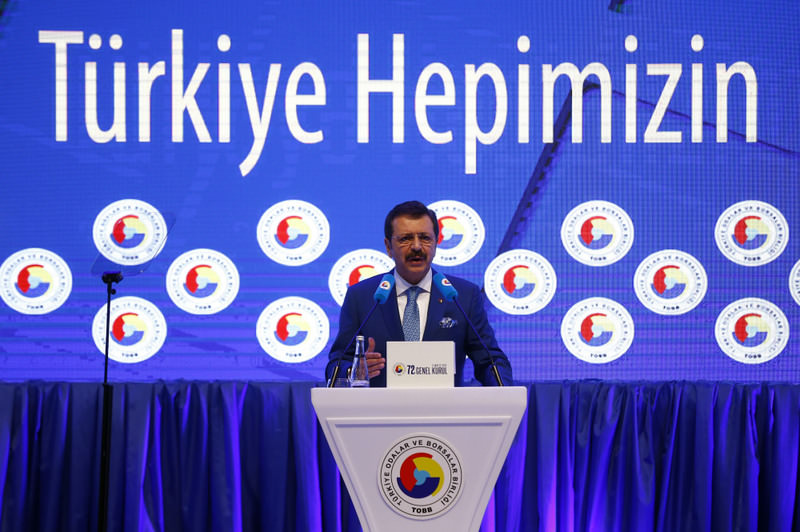 Turkey's business community head, Rifat Hisarcıklıoğlu, called on banks to sacrifices. He said the real sector is the victim of high interest rates, but banks should not forget that they are in the same boat

The Turkish business community, which is struggling to overcome financial troubles brought on by high interest rates, has warned the Central Bank of the Republic of Turkey (CRBT) to ease access to finance. Turkish Union of Chambers and Commodity Exchanges (TOBB) President Rifat Hisarcıklıoğlu stressed that companies must be freed from dependency on banks in accessing finance, saying that a remedy must be found soon to end the victimization of the real sector by high interest rates and commissions.

Underlining that banks should not always expect self-sacrifice from the real sector, Hisarcıklıoğlu said, "Now it is their turn to self-sacrifice." He noted that companies operating in the real sector cannot make as much profit as banks, and called on banks to abandon their unconscientious attitude. "Do not forget that we are in the same boat."

Speaking at the TOBB's 72nd General Assembly, under the slogan "Turkey is for all of us," Hisarcıklıoğlu said, "Turkey has in recent years written a perfect success story." Underlining that Turkey needs a new growth and industrialization model, he said people must be encouraged to carry out registered studies, and those who do this must be awarded. He also expressed his desire to embrace those who pay taxes regularly. Stressing that entrepreneurs must not be left at the mercy of the bureaucracy and supervisory bodies, he said entrepreneurs must carry out business in accordance with the law, like everyone else, adding, "Well, will those who make entrepreneurs miserable in an unfair way not pay a price? Just as we pay for our mistakes in business life, those who cause losses for us through wrong and arbitrary supervisions must pay a price. Let us not leave our entrepreneurs, who produce and turn an honest penny, to the mercy of supervisors."Customs and Trade Minister Bülent Tüfenkci, Finance Minister Naci Ağbal, Internal Affairs Minister Efkan Ala, Economy Minister Mustafa Elitaş participated in the General Assembly. Prime Minister Ahmet Davutoğlu did not attend the General Assembly, despite being invited. Hisarcıkoğlu did not forget to thank Davutoğlu. While on Twitter, the hashtag "Turkey is for all of us" was began, the main themes of the General Assembly were "together for peace, together for abundance" and "contemporary democracy, prosperous society, leading country." The TOBB hosted members from 81 cities and 4,000 participants. There was a separate section provided for female entrepreneurs.

The business world demanded a road map for the economy, as well as expressing other requests including the renewal of the investment and incentive system. Businesspeople are asking for the allocation of incentives to be project-based, while also saying that entrepreneurs should not be abandoned to the whims of the bureaucracy. Businesspeople also want to be honored for paying their taxes. For the tourism sector in particular, they want the burdens on the sector to be alleviated, as well as decreasing financial burdens on employment. For the agriculture sector, they asked for further integration with world markets along with trademarking. The business world also expressed their wishes regarding legal procedures. They want judicial procedures for commercial cases, as well as more active arbitration processes. The business world also emphasized that Small- and Medium-Sized Enterprises (SME) should be taught how to conduct exports.
RELATED TOPICS