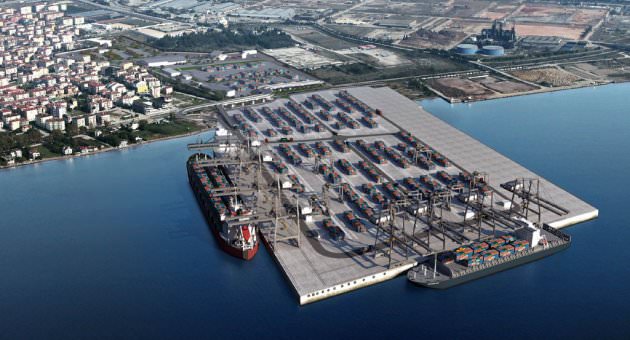 by Daily Sabah May 12, 2016 12:00 am
President Recep Tayyip Erdoğan will attend the opening ceremony tomorrow of one of Turkey's most important container terminals, Dubai Port (DP) World Yarımca in Kocaeli.

While the preparations for the opening are in progress, DP World Yarımca will be the first port to have a truck parking system within reach of a Turkish harbor.

Spread across 46 hectares in Kocaeli's Gulf district, more than $600 million has been invested in DP World Yarımca so far. Four 87-meter-high pier cranes brought from China on by ships were installed in the port. These Electrified Rubber Tyred Gantry Cranes (E-RTG) will be used for handling containers, and according to Hürriyet daily, very few container terminals around the world have them. Moreover, DP World Yarımca will be the first terminal in Turkey to use them. They feature a remote control system that enables them to be operated from 1.5 kilometers away.