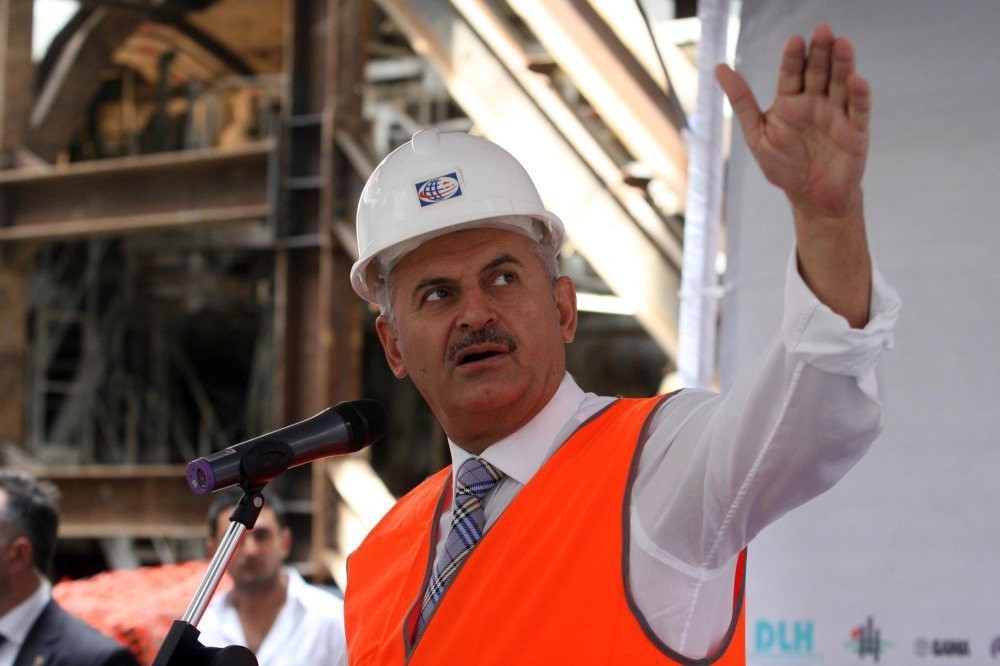 Following the AK Party's announcement of Yıldırım, also known as the infrastructure maestro, as the sole candidate for prime minister, the business world welcomed the news, looking positively to Turkey's economic future and maintaining full confidence in the AK Party

Ruling Justice and Development Party (AK Party) delegates will gather in Ankara on Sunday for an emergency convention where Binali Yıldırım, the transportation minister with a long track record of success in realizing megaprojects, is the sole candidate to replace Ahmet Davutoğlu as party chairman and prime minister. Yıldırım, whose term as transportation minister is the longest in Turkey's history and has witnessed nearly TL 255 billion ($85.57 billion) in investments, is also welcomed by Turkey's business community.

Business community representatives say a prime minister that takes decisive action will bring great opportunities for them, suggesting that Yıldırım will lend impetus to the economy.Independent Industrialists' and Businessmen's Association (MÜSİAD) Chairman Nail Olpak said he believes Yıldırım will continue to make significant contributions to the country with his extensive experience and broad vision. "As the business community in Turkey, we will continue to work with our government to build our future," he added.

A written statement from the Turkish Exporters' Assembly (TİM) said the assembly welcomes Yıldırım's candidacy for the AK Party chairmanship and prime minister. "We believe this is a major step toward the achievement of our 2023 objectives in terms of harmony and stability. We highly appreciate Yıldırım for his efforts and success in spurring infrastructure investments and development projects. We wholeheartedly believe the new Cabinet to be formed under Yıldırım's tenure will endeavor to conduct more investments, production and exports in the upcoming years in line with our 2023 goals," it said.


Istanbul Chamber of Commerce (İTO) Chairman İbrahim Çağlar referred to Yıldırım as a "visionary politician" who left his mark on Turkey's development over the past 15 years, adding, "We are greatly pleased to learn of his candidacy."

Istanbul Chamber of Industry (İSO) Chairman Erdal Bahçıvan said industrialists consider Yıldırım's candidacy for prime minister to be a major step, adding that the moves that Yıldırım has taken in transportation and information technologies are the concrete indicators of what he will do as prime minister. "This is an important issue for industrialists. We think our work in high technology will progress further," he added.

İzmir Chamber of Commerce Chairman Ekrem Demirtaş said Yıldırım's candidacy gives hope to both İzmir and Turkey's business circles. "Yıldırım is a man of politics who made unique contributions to the country as a minister of actions and sanctions," he said.

Industrialists' and Businessmen's Association (TÜMSİAD) Chairman Yaşar Doğan said Yıldırım undertook significant roles in the government's development policies and made great endeavors for the implementation of mega projects with his visionary characteristics. "I believe he will continue to succeed in our country's development and growth policies in his new role. He will make breakthroughs in regional policies, relations with the European Union, the implementation of economic reforms and the achievement of Turkey's 2023 objectives," he said.

Yıldırım, who has been nominated as AK Party chairman and prime minister following Prime Minister Ahmet Davutoğlu's withdrawal, stood out as a hardworking and successful minister during his more than 11 years in the ministry.

Yıldırım's term of office has seen nearly TL 255 billion in investments and the implementation of many mega projects on an international scale. Also, a total of 24,280 kilometers of divided roads were put into service; the distance between big cities was reduced by the construction of the Ankara-Eskişehir, Ankara-Konya and Ankara-Istanbul high-speed train projects, and 1,805 kilometers of new railways, including 1,213 kilometers of high-speed train lines, were constructed in the same period. Yıldırım's term of office also saw the connection of Istanbul's Asian and European sides through an undersea rail tunnel, the Marmaray, and the completion of the Black Sea Coastal Road Project, the construction of which had lingered for many years.

Additionally, the construction of the Kars-Tbilisi-Baku railway, which will offer international transport services between the Asian and European continents, was initiated during Yıldırım's incumbency. It is expected that the railway will come into service at the end of this year. Also, Istanbul's third Bosporus bridge, the Yavuz Sultan Selim Bridge, which will be one of the largest bridges in the world, has nearly been completed as part of the North Marmara Highway project. The construction of the Eurasia Tunnel, which will connect the two sides of Istanbul under the Bosporus strait, is on the verge of completion. The last deck of the İzmit Bay Bridge, which is one of the longest suspension bridges in the world, was also installed during Yıldırım's service as minister.

With the principle, "We will make air travel the way of people," Yıldırım increased the number of operational airports in Turkey to 55 from 26 and the number of airline passengers to 182 million from 34.4 million a year. The aviation industry grew by 15 percent on a national scale and by 5 percent on a global scale in the same period. Also, construction work on Istanbul's third airport, which will be one of the largest airports in the world when completed, gained speed during Yıldırım's term. A number of private airline companies entered the aviation market as a result of the liberalization achieved in the sector.

Many significant projects and studies were carried out in communications and information technologies. As a result of this, the number of mobile phone subscribers rose to 73.2 million from 23 million in 2002, and the number of broadband subscribers soared to 41 million from 3,000 in 2002. The duration of television conversations surged to 370 minutes from 126 minutes a month, and e-commerce volume achieved a 21 percent upsurge, reaching TL 18.9 billion from 900,000 million in 2003. Yıldırım, who introduced 4.5G technology in mobile communications, initiated work to make Turkey have a say in 5G technology.