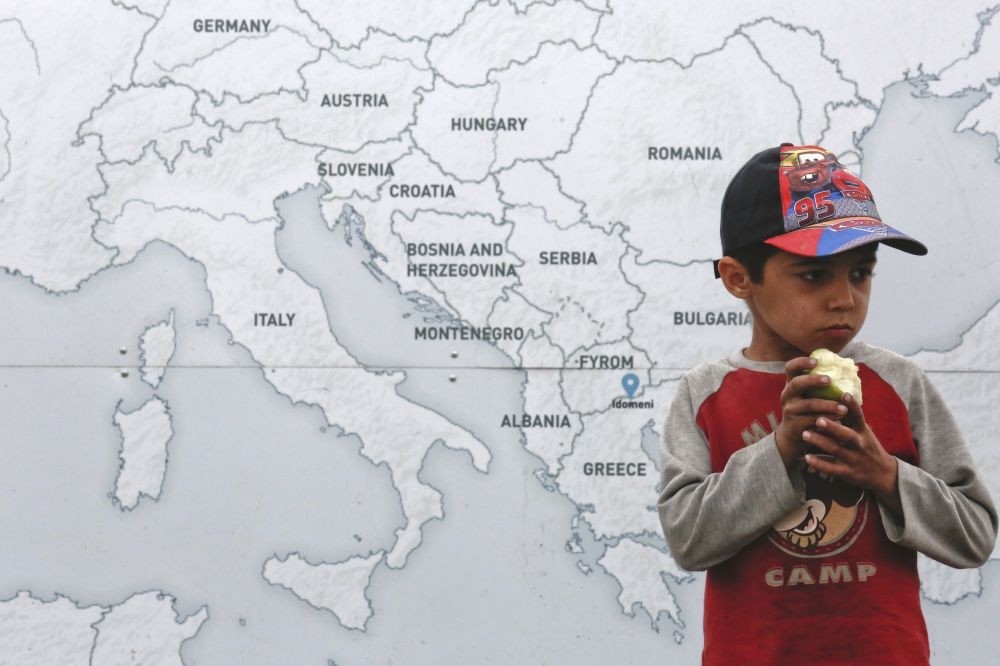 A boy eats an apple next to a map illustrating part of Europe at a makeshift camp for refugees and migrants at the Greek-Macedonian border near the village of Idomeni, Greece.
by Anadolu Agency May 23, 2016 12:00 am
Despite reports from international institutions and remarks from top officials predicting that refugees would likely boost Europe's economy, officials seem wary of benefiting from that wave of fresh energy. Asylum-seekers, about 80 percent of them under the age of 35, have not seen a warm welcome from the European continent, which has the oldest population in the world.

As experts warn that quality is as important as youth in giving someone asylum, European countries seems to be keeping the initiative to themselves in choosing who they give this right.

But the vitally needed fresh stimulus for Europe, as yet unable to recover from the 2008 crisis, may be these asylum-seekers, according to reports and officials.

"The current surge in refugees is a challenge with an upside potential. With appropriate policies, this rich source of human capital can be harnessed with benefits for everyone," International Monetary Fund President Christine Lagarde said in January, urging countries to see refugees as an investment rather than a burden.

Last year the Organization for Economic Cooperation and Development, or OECD, released a report suggesting the impact of refugees on economies is minimal and even positive in some cases.

"Estimates of the fiscal impact of total immigration are quite varied across studies, but are usually small, with some indicating net fiscal benefits and others net fiscal costs to host countries" the OECD said in a report last November.

The Tent Foundation and Open Political Economy Network released a report on Wednesday arguing that investing in refugees might be a hugely profitable investment for European states.

"Investing one euro in welcoming refugees can yield nearly two euros in economic benefits within five years," said the report.

"The key message of this study is that policymakers and practitioners should stop considering refugees as a 'burden' to be shared, but rather as an opportunity to be welcomed," according to the report.

But the unwillingness of European states to accept refugees persists, for reasons ranging from cultural and religion differences to the challenges of integrating them into society and labor markets.

But a well-crafted refugee scheme seems critical for Europe's economy, as currently nearly 18 percent of Europe's population is over 65 versus just 8 percent in 1950, according to UN figures.

In Italy, Greece, Germany, Bulgaria, Portugal, and Finland, more than one-fifth of the population is over 65. The future of those states and economies depends almost entirely on the contributions of immigrants.

"Not wanting to accept more refugees from the EU side is partly due to prejudices-some countries just don't want Muslim refugees-and partly due to real economic considerations," said Sebastian Dullien, an economics professor at HTW Berlin - University of Applied Sciences.

"Refugees only help if they can be integrated into the labor market. If they are not, they become a burden to the social system and actually make the problem of an aging society worse," he added.

Astrid Ziebarth from the U.S.' German Marshall Fund is a little more optimistic, but points out the need for better job training.

"In the long run there are good chances that the German economy will benefit from the refugees. However, currently researchers point out that about 70 percent of those who are coming to Germany don't have a proper education or job training," she said.

"If past refugee experience from the '90s, where Germany hosted large portions of refugees from the Balkans also with lower levels of education, can be any indicator, it will take about 15 years until the majority will have found a permanent job. Only 10 percent found a job in the first year way back then," she added.
RELATED TOPICS