Investors all on watch as Fed policymakers line up to speak 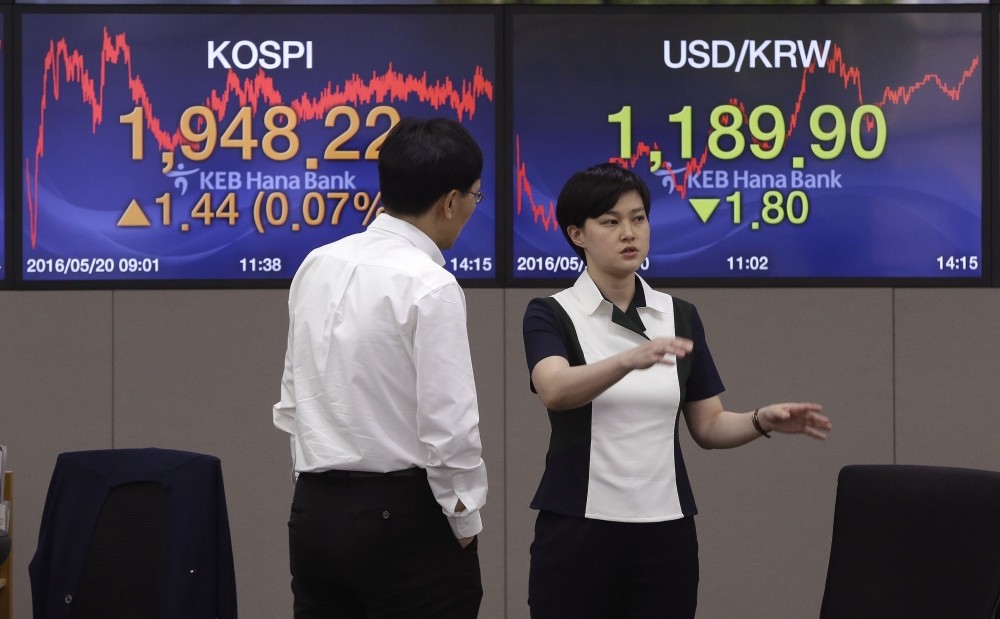 Currency traders work at the foreign exchange dealing room of the KEB Hana Bank headquarters in Seoul, South Korea.
by May 23, 2016 12:00 am

U.S. policymakers were upbeat about the prospects for an increase in interest rates, the minutes of their April meeting showed last week, which sent the dollar as well as U.S. and European bond yields higher

Investors will listen closely to a slew of U.S. Federal Reserve policymakers in the coming week to gauge how soon they will raise interest rates, while European finance ministers look set to agree on more aid for cash-strapped Greece. U.S. policymakers were unexpectedly upbeat about the prospects for an increase in rates, the minutes of their April meeting showed in the past week. That sent the dollar as well as U.S. and European bond yields higher.

Fed speakers in the last few days have further strengthened the markets' view that the central bank will tighten policy soon, leaving analysts to ponder whether that move will come in June or July.

"We still believe the Fed is more likely to continue waiting. But there is a considerable risk that a rate hike is imminent," Commerzbank analysts said in a note to clients on Friday. The main Fed speaker in the coming week will be Chair Janet Yellen, who appears at a panel event hosted by Harvard University on Friday. Fed branch presidents including those from San Francisco, St. Louis, Dallas, Minneapolis all speak earlier in the week.

The key precondition for a rate hike that U.S. policy-setters outlined in April was signs of economic growth picking up in the second quarter and of employment and inflation firming up, the minutes showed.

With no second-quarter GDP data due until the end of July, investors are this likely to focus in the coming week on the second estimate of U.S. first-quarter growth due out on Friday. The consensus view of analysts in a preliminary poll by Reuters is for growth to be revised up to 0.9 percent from the preliminary reading of 0.5 percent.

"The data suggest that the US economy did not perform quite as poorly in Q1 as previously assumed," Commerzbank said. "There is increasing evidence pointing to considerably stronger growth in Q2."

One factor that could stay the Fed's hand next month, however, is concern over any fallout from Britain's referendum on June 23 on whether to remain in the European Union. So far British data has shown little sign of a 'Brexit' effect on economic activity. The breakdown of first-quarter GDP due on Thursday will be watched for any signs of an impact on business investment.

The Bank of Canada is widely expected to keep interest rates on hold on Wednesday despite a rise in the annual inflation rate in April. The bank has said inflation is being influenced by temporary factors. In Europe, where the European Central Bank has pledged to keep policy ultra-loose for a long time to come, Hungary is seen cutting interest rates on Tuesday. Preliminary purchasing managers' indexes for France, Germany and the euro zone due out today morning are expected to show steady if not stellar growth in business activity.

The main focus in the shared-currency bloc in the coming week, however, will be on Tuesday's Eurogroup meeting of finance ministers, who are likely to agree on fresh aid to enable Greece to keep up with repayments to its creditors for the next few months.

They may also forge a tentative and highly conditional plan to help Athens reprofile its debt burden to make it more sustainable, euro zone officials preparing for the talks said. One key to the success of the talks is whether the euro zone can iron out its differences with the International Monetary Fund to ensure that the IMF then participates in that plan. The two have been struggling to agree on when to give Greece a break on its future massive debt repayments. The euro zone wants to postpone a final decision on debt relief until 2018, while the IMF insists Greek debt repayment is unsustainable and investors need clarity now.

"Although final agreement may not be forthcoming on Tuesday, we expect that they will signal a definite direction of travel to enable the IMF to come on board," analysts at RBC Capital Markets said in a weekly note to investors.