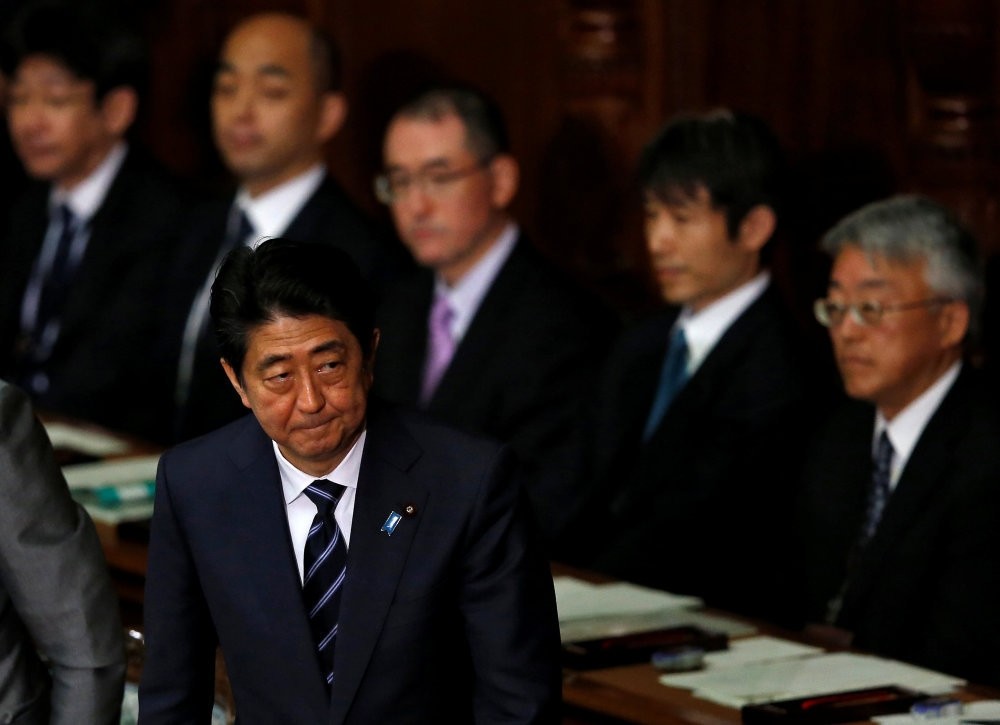 Japanese Prime Minister Abe leaves after the lower house defeated a no-confidence motion against his cabinet, which was submitted by four opposition parties at parliament in Tokyo, Japan, May 31.
by Associated Press Jun 01, 2016 12:00 am

Defeating the no-confidence motion from the opposition, Japanese Prime Minister Abe is now expected to announce the delay of a sales tax hike, which could pose more risks to the economy

The defeat of the no-confidence motion, by a vote of 345 against to 124 in favor, was a foregone conclusion, thanks to the strong majority Abe's ruling Liberal Democratic Party holds in parliament. But opposition leaders took the opportunity to renew their attacks on the prime minister's "Abenomics" strategy for reviving the economy.

Abe is widely expected to announce on Wednesday a delay of a planned April 2017 sales tax hike to 10 percent from the current 8 percent. He has been lobbying to delay the increase until October 2019, arguing that the risk of a severe downturn is too high because of uncertainty over the global economy.

Katsuya Okada, head of the Democratic Party, one of four opposition parties that submitted the no-confidence motion, accused Abe of bungling the economy. "Prime Minister Abe should immediately step down," he said. "He mishandled economic policy, and his Abenomics has failed."

Japan's economy, the world's third-largest, has been stuck in the doldrums for years. Since taking office in late 2012, Abe has championed a massive monetary easing aimed at vanquishing persistent deflation, which tends to discourage corporate investment and consumer spending. Data for April showed factory output fell 3.5 percent from a year earlier and consumer spending also edged lower, while the consumer price index fell 0.3 percent.

While weak, the latest figures were better than expected. But Abe has nonetheless won grudging support for postponing the tax hike from a key ally, Finance Minister Taro Aso. "It is one option to help support consumer spending," Aso said of the likely delay. With Japan's public debt at nearly 240 percent of its GDP, putting the nation's accounts in order remains an urgent priority.

Those favoring a delay argue the recovery is too weak to endure a fresh hit to consumer spending from a tax hike. The increase could backfire, they say, if it causes such a downturn that government revenues actually contract. "The government probably wants to avoid delivering a hammer blow to a fragile economy without seeing solid improvement at the fundamental level," Margaret Yang of CMC Markets said in a commentary.

At a summit of the Group of Seven rich nations last week in central Japan, other leaders demurred at Abe's insistence that the world economy is on the brink of a crisis at a time when the U.S. economy is strong enough that the Federal Reserve is preparing to raise interest rates. But Abe cited G-7 backing of the use of all policy tools available to countries as a justification for a tax hike delay. Critics have accused Abe of trying to use the event as a smoke screen for the failings of his own policies. "It's irresponsible and shameless," said Japan Communist Party leader Kazuo Shii.

The last time Japan raised its sales tax, to 8 percent from 5 percent in April 2014, the economy lapsed into recession. Growth has been uneven since then, and Abe initially opted to postpone the increase to 10 percent, originally set for October 2015, to April 2017.

By pushing back the tax increase again, Japan risks having its credit downgraded, though the impact would be limited by the fact that almost all of its debt is owned by domestic investors or the central bank.

It is unclear how Abe will pay for various government spending commitments that were supposed to be financed through the tax increase. They include payments of stipends to low-income pensioners, subsidies for elder care and scholarships, and pay increases for nursing and childcare workers.

"Whichever policy decision we take, there will be a risk," said Sadakazu Tanigaki, secretary-general of Abe's party. Abe reportedly rejected the idea of dissolving the lower house of Parliament and holding a snap election in July, when Japan is due to hold a vote for the less powerful upper house.
Last Update: Jun 01, 2016 1:50 am
RELATED TOPICS