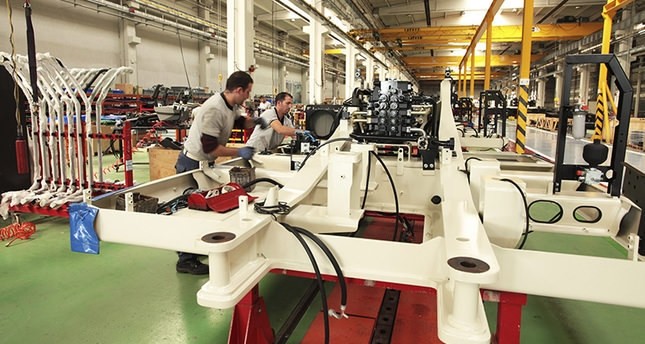 According to the Turkish Statistical Institute (TurkStat), calendar-adjusted industrial production fell 1.1 percent in April when compared to the previous month. The mining and quarrying index declined 5 percent, and the manufacturing index dropped 1.3 percent for the same period. But electricity, gas, steam and air conditioning supply output increased 1.8 percent in April in contrast to the prevailing trend. Producers of capital goods saw the largest decrease: 3.7 percent. However, total calendar-adjusted industrial turnover index, the correction for calendar variations including working day adjustments, grew by 0.7 percent in April compared with the same month last year.

The decline surprised analysts that had forecast a rise in output. Leading economists participating in the Anadolu Agency (AA) Industrial Output survey had anticipated an average 3.3 percent increase in April.

"Being its biggest export market, Turkey has a high exposure to Euro area developments, especially to Germany," economist Bora Tamer Yılmaz at Ziraat Securities told AA. "So far, indicators point to a slowdown in German manufacturing activity in the second quarter. Factory orders fell by 2 percent in April, far worse than the 0.5 percent market estimate. Consequently, Turkish industrial production fell by 1.1 percent in the corresponding month."

According to Yılmaz, industrial production series have a standard deviation of 1.8 percent. "Therefore, a 1.1 percent decline can be considered normal, as it may correct itself in the coming months," he said. Yılmaz warned that Turkey might need to accelerate domestic demand and work harder to diversify export markets to offset the weakness stemming from Germany.

Turkey's industrial output is the concern, as gross domestic product (GDP) growth stood at 4 percent last year. The government aims to reach GDP growth of 4.5 percent and reduce consumer price inflation to 7.6 percent in 2016, according to the government's national economic plan for development.

The World Bank expected growth to slow to 3.5 percent in 2016 because of a more negative contribution from net exports compared to 2015, according to the April edition of the bank's Turkey Regular Economic Brief.

Government officials have repeatedly criticized the relatively tight monetary policy of the Central Bank of the Republic of Turkey (CBRT), claiming this was limiting growth. Turkey's central bank cut a key interest rate in March. On May 24, the bank cut the overnight lending rate to 9.5 percent from 10 percent, while keeping its benchmark one-week repo rate steady at 7.5 percent and its overnight borrowing rate at 7.25 percent. Economists forecast that the bank would cut a key interest rate for a fourth consecutive time at its June meeting.