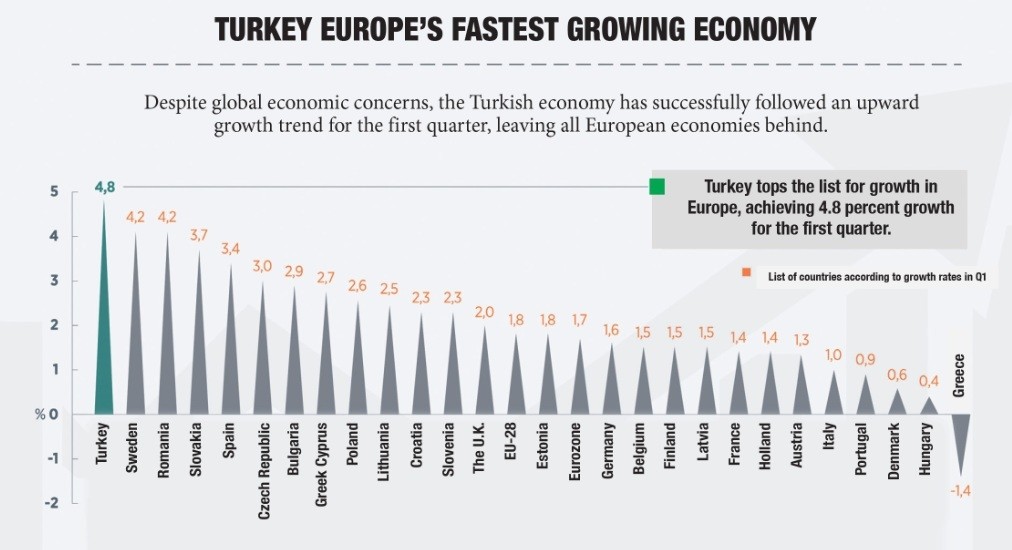 Turkey’s economy grew by 4.8 percent in the first quarter of the year. Backed by strong domestic demand, the economy performed above expectations of 4.5 percent growth, despite geopolitical tensions and recession on a global scale

Turkey's Gross Domestic Product (GDP) growth for the year's first quarter soared at 4.8 percent compared to the same period in the previous year, reaching TL 31.68 billion ($10.86 billion) at constant prices and with cumulative GDP reaching TL 499.3 billion in current prices, according to data reported by the Turkish Statistical Institute (TurkStat) Friday. In doing so, Turkey's quarterly growth rate exceeded most economists' expectations, which were that there would be a 4.5 percent growth rate for 2016's first quarter.

Domestic demand affected the 4.8 percent growth rate, contributing an approximate 6-point rise, while net exports had a downward effect on growth by 1.5 points. Private consumption and public consumption, components of domestic demand, had an upward influence on growth, respectively 4.8 and 1.2 percent, according to calculations relying on TurkStat's data.

Another remarkable point was the increase in household consumption, showing a rise of 6.9 percent compared with the previous quarter. Government consumption on the other hand rose by 10.9 percent for the same period.

Among the economists predicting a fall in the growth, some were optimistic concerning the quarterly performance of the Turkish economy. Speaking to Daily Sabah, economy professor Kerem Alkin said this current growth rate is still modest. The economist expected the quarterly growth rate to realize at around 5.5 percent. He even expects an upward revision in this 4.8 percent growth rate, which can be revised to above 5 percent.

Despite the shrinkage in the volume of trade, squeezing the trade deficit, negative exports have a considerable negative impact in growth, according to Alkin. He added that the quarterly performance of the agricultural sector, which accounts for 9 percent of the total GDP, has been following a declining trend from 3.7 percent and 2.9 percent growth rates in the first quarters of 2014 and 2015 respectively, to 2.7 percent in 2016. The economist commented that this decline has a downward effect on the quarterly growth rate.

Regarding the announced growth rate, deputy prime minister in charge of the economy Mehmet Şimşek said despite geopolitical tensions in the region, problems experienced with Turkey's trade partners and weak global economic performance in the background, the Turkish economy has been maintaining its strong economic performance. Şimşek also highlighted that in the first quarter of 2016, Turkey was one of the economies achieving the fastest growth among European Union and the Organization for Economic Cooperation and Development (OECD) member states.

Şimşek said through policies implemented based on the extensive reform agenda the high level of employment has remained steady, with 6.9 million people entering employment since the global financial crisis, 880,000 of whom were employed within the last year.

Şimşek noted in order to achieve the aim of reaching the league of high-income countries with the help of strong, sustainable and extensive growth, the government will go on implementing structural reforms.

Pointing to the relatively high quarterly growth rate, Finance Minister Naci Ağbal said in the medium term Turkish growth will have a more positive trajectory than other emerging economies because of its high growth performance. Echoing with Şimşek's remarks, Ağbal also commented that the Turkish economy has been maintaining its high growth performance despite rising geopolitical risks, problems associated with foreign trade due to political tensions and fluctuations in global markets.

Turkey's economic growth exceeded expectations last year as well, achieving a growth rate of 4 percent, with quarterly growth rates of 2.5, 3.7, 3.9 and 5.7 percent, respectively. The 4 percent growth rate in 2015 was one of the fastest growth rates in the world despite two elections and a number of terror attacks, as well as low investor appetite negatively affecting emerging economies.

Growth expectation for upcoming quarters not as optimistic as for Q1

Despite the high 4.8 percent growth rate achieved in the first quarter of 2016, economists expect growth rates in the following quarters of 2016 to realize at below 3 percent. Economist Kerem Alkin drew attention to the second and third quarter growth rates, which are expected to be between 2.5 and 3 percent, in contrast to the high numbers achieved in the first quarter. Alkin pointed out that industrial production, according to data released by the Turkish Statistical Institute constituting 30 percent of Turkey's Gross Domestic Product (GDP) and considered the major economic indicator for forecasting the real performance of the economy, realized below expectations to shrink by 1.1 percent on a monthly basis. According to Alkin, this signals that the economy will not perform as bright in the second quarter as in the first quarter. For the year-end growth rate, he said he expects the annual growth rate to realize at slightly below 4 percent.

Year-end growth forecasts are lower for upcoming quarters. Regarding the year-end growth rate, the government in its Medium-Term Economic Program (MEP) predicts that the gross domestic product (GDP) will increase to 4.5 percent in 2016 and 5 percent for 2017 and 2018.

The World Bank's Global Economic Outlook report in June left their prospective growth rate for Turkey unchanged at 3.5 percent for 2016 and 2017, adopting a relatively more optimistic approach on Turkey compared to the global economic growth rate, which was revised down from 2.9 percent to 2.4 percent for 2016. The bank revised Turkey's global forecast up 0.2 percent to 3.6 percent for 2018.

The International Monetary Fund (IMF) World Economic Outlook report in April forecasts that for Turkey, growth will remain stable at 3.8 percent in 2016, and will realize at 3.4 percent in 2017.

The Organization for Economic Cooperation and Development (OECD) announced that Turkey will climb one step up the growth chart to be amongst the top three countries with the highest growth among the OECD's 34 member countries. The report predicts Turkey will rank second in 2017. The Turkish economy grew 4.8 percent, in the first quarter, above expectations, and is one of the best-performing countries among OECD members.

According to OECD's Economic Outlook Report for June, the organization upgraded their growth forecast for the Turkish economy for 2016 from 3.4 percent to 3.9 percent. Turkey is expected to grow by 4.5 percent this year, in accordance with the Medium-Term Program (MTP). As Turkey's growth rate stands at 3.9 percent as estimated by the OECD, it ranks third. Ireland ranks highest among OECD members with a growth forecast of 5 percent. Ireland is followed by Iceland and Turkey with 4.4 percent and 3.9 percent, respectively. Luxembourg, Switzerland and Slovakia are expected to grow by 3.7 percent, 3.4 percent, 3.1 percent respectively, and New Zealand and Poland are both estimated to grow by 3 percent. It is estimated that the average growth rate among OECD members will be 1.8 percent this year and 2.1 percent next year. Turkey grew by 2.5 percent in the first quarter of last year, and 4 percent throughout last year.

After the announcement that the Turkish economy saw a first quarter growth rate of 4.8 percent, coming in above expectations, the business world further consolidated its optimism and expressed its full confidence in Turkey's economy, which they expect to also perform well in upcoming periods. Chairman of the Independent Industrialists and Businessmen's Association (MÜSİAD) Nail Olpak said in a press release Friday that all the good economic data, including the 4.8 percent growth rate in the first quarter of the year, signals a bright future for Turkey despite the current negative global context, which sees countries facing recessions worldwide. He also said the business world has full confidence in the Turkish economy, and the latest quarterly growth signals the economy is getting closer toward achieving the target of 4.5 percent growth for 2016 set by the government's Medium-term Economic Program (MEP).

Speaking on behalf of representatives of the Turkish business world, Olpak stressed they are proud of their industrial production, which rose 4.7 percent in the first quarter and contributed considerably to the growth of the economy, while increasing its share in the total economic pie and growing by 5.9 percent compared to the first quarter of the previous year.

Furthermore, regarding the latest quarterly growth statistics, in a press release published Friday, Head of the Turkish Exporters Assembly Mehmet Büyükekşi emphasized that Turkey has continued to perform strongly.

Highlighting that the negative direction of net exports on quarterly growth by 1.54 points due to the real growth rate in imports rising more than in exports in the light of decreasing commodity and oil prices, Büyükekşi said Turkish exporters are ready to take whatever action necessary to increase the real growth in exports, adding that currently they have been entering new markets to offset the negative spillover effects arising from a global recession and geopolitical tensions.