Staying apart appears to be too costly for Ankara and Moscow 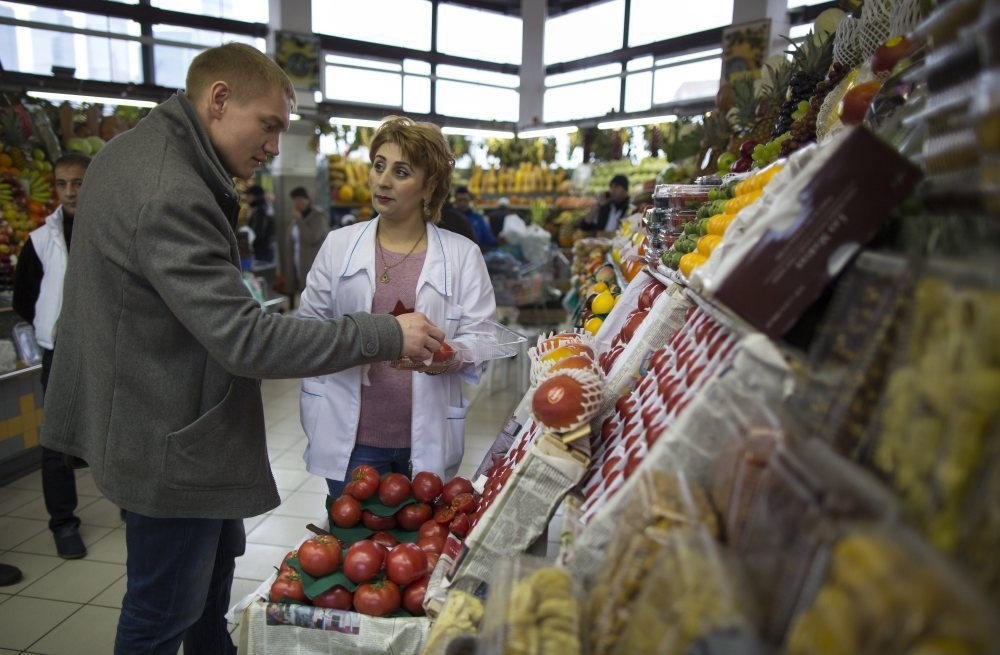 A merchant helps a customer buy tomatoes at Dorogomilovsky food market in Moscow. Since Turkey shot down Russian plane that violated its airspace, Russia has restricted tourism, left Turkish trucks stranded at border and confiscated imports.
by Şeyma Eraz Jun 18, 2016 12:00 am

Political revenge has come in the form of sanctions, but sometimes it is unaffordable. After six months of strained ties, Ankara and Moscow are looking for the ways to mend relations, with economic losses as a motivation

Ankara and Moscow each have their reasons to be furious with each other. It was not easy for Turkey to decide to down a warplane that violated its airspace without knowing where it came from, nor was it easy for Russia to just let it go after losing a jet and a pilot. And the political revenge is sanctions. The foreign trade volume between Turkey and Russia soared from $26.2 billion in 2010 to $31.2 billion by the end of 2014, a 17.3 percent upsurge. However, it was turned upside down after the incident on Nov. 24, 2015. While Russia was Turkey's seventh-largest import partner in 2014, it is now 20th as of May. In the first five months of this year Turkey's exports to Russia fell dramatically, nearly 75 percent when compared to the same time period of 2014.

Keeping the import level high is a must for Turkey since the country aims to reach $500 billion annual trade volume and become one of the 10 biggest economies in the world in 2023, the 100th anniversary of the Republic. However, during a period where Turkey lost this valuable trade partner, the country reached a growth level of 4.8 percent in the first quarter of this year.

However, the situation has been more complicated for Moscow. The Russian economy contracted 1.2 percent year-on-year in the first quarter, following a 3.8 percent fall in the previous period. The country has been going through hard times due to a decline in oil prices, Western sanctions and a slump in capital inflow into the country. Despite the loss, the government in Moscow was too furious to realize major projects like the Turkish Stream pipeline, which aimed to carry Russian natural gas to Europe via the Turkish-Greek border, would help the energy-rich economy to recover in the long term.

After Turkey downed a Russian warplane for violating its airspace near the Syrian border the furious Russian government announced sanctions on Turkey in response. Turkish food imports were blocked at Russian border gates after Jan. 1. Moscow called on Russians to not visit Turkey and opened up investigations into Russian tourism agencies organizing tours to Turkey. Moreover, Russia refused to issue work permits for Turkish citizens and called for an end to visa-free travel. But, these have been too costly for both sides.

If the economic costs are too heavy to handle, it may be the time to see them as motives that would heal political relations.

This week, normalization of relations between Turkey and Russia gained momentum, a move that could recover trade ties following President Recep Tayyip Erdoğan sending a letter to Russian President Vladimir Putin to celebrate Russia's National Day, which marks the country's post-Soviet constitution, and Putin thanking Erdoğan, along with the Russian ambassador attending an iftar dinner at the Presidential Palace in Ankara.

"Two countries that share a sea cannot just cut their relations," Professor Abdurrahim Güzel, a Turkish academician and a businessman living in Russia, said. According to Güzel, this problem will not persist, and both governments knew it. "They couldn't just scrap the Akkuyu Nuclear Power Plant project," he said, mentioning Turkey's first nuclear power plant to be built by Russia, an investment worth $22 billion. Moreover, Putin could not just ignore Turkish contractors' time management, quality and low costs in the run-up to the Sochi Olympics, which paved the way for Turkish contractors to get special permission to work in Russia even after the jet crisis. The Turkish Stream waits in the limbo, but no one has wrung its death knell. "In a globalized world, countries do not have the luxury to drift apart. Ankara and Moscow will hold on to pragmatic reasons to recover relations," Güzel said.
Last Update: Jul 01, 2016 5:19 pm
RELATED TOPICS