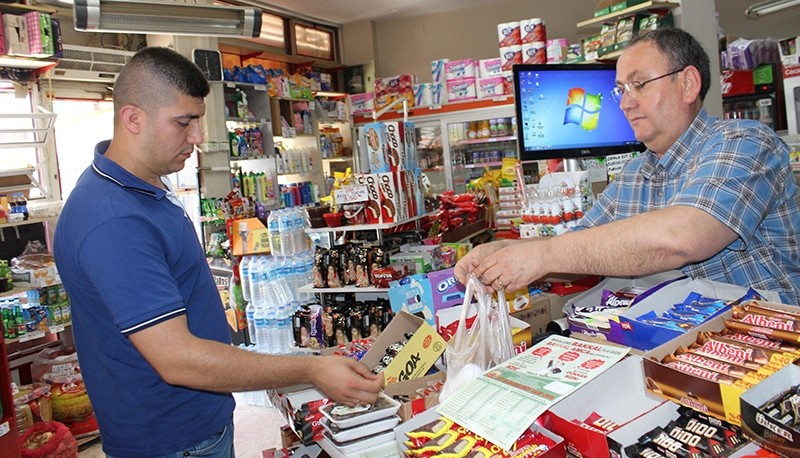 A customer shops at a local grocery store in Turkey's Western Edirne province (IHA Photo)
by daily sabah Jun 21, 2016 12:00 am

Seven local grocers in northwestern Bursa province's İnegöl district who joined forces in 2006 to compete with large supermarket chains are now seeing their turnover rise by as high as 400 percent, in what appears to be a rare example for local stores failing to compete with the surge of supermarkets which attract customers with lower prices and promotions. The initiative could provide hope for the waning local grocery store tradition, hailed as one of the most prominent features of the neighborhood culture in Turkey.

The Inegöl Grocery Distribution Cooperative (IGDC) President Bülent Savaşçı told the Hürriyet daily that when the co-op was first founded in 2006, their first goal was to buy products in bulk and lower the prices as much as possible, in order to be able to create competition between themselves and large supermarkets. In 2009, three years later, they reached that goal.

Today, the IGDC has close to 100 partners.

''While the daily turnover rate of local grocery stores ranged between 1,000 and 1,500 Turkish lira until 2006, we now have members who are able to make a daily turnover of 3,000 to 5,000 Turkish lira'' Savaşçı said. What is even better according to the IGDC president is that these small enterprises are now able to offer prices that are the same or even lower than large chains.

According Savaşçı, the philosophy behind the co-op is to retain the local grocery store culture while bringing in elements that make large supermarkets successful — such as infrastructure and product diversity.

Savaşçı believes that they have reached a supermarket-level of product diversity. "You used to not be able to find baby food in grocery stories. Now, we even sell baby diapers in most of our stores," Savaşçı said.

"People are slowly trusting grocery stores again," he added and continued by saying that it is their job to ensure that the grocery store culture survives.

Savaşçı explained that the IGDC now has 15 branches across Inegöl, and around 40 grocery store owners in the district are following the IGDC's example.

With significant changes in the consumption habits of Turkish people and steady economic growth, local grocery stores which fail to compete with large supermarkets have suffered significant losses and are replaced with chain supermarkets.