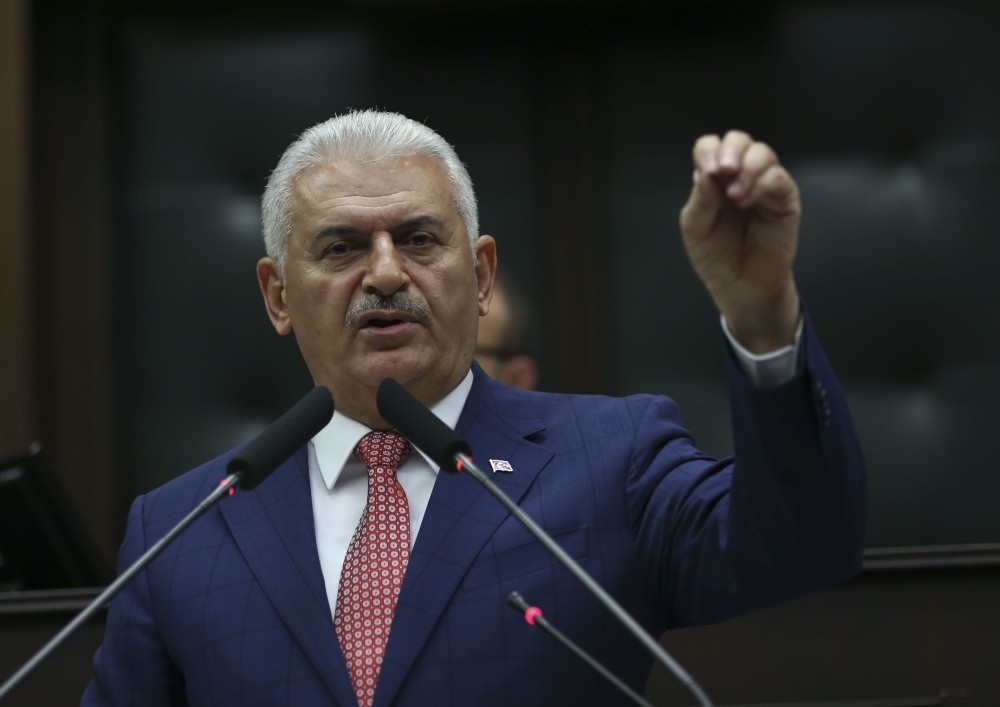 At a parliamentary group meeting, Prime Minister Yıldırım announced the development project to spur growth to gain momentum and rescue citizens from terrorism through employment opportunities in the east and southeast

Prime Minister Binali Yıldırım has announced a project that will bring young people down from the mountains in the southeast where militants from the PKK terrorist organization are active. Explaining that centers will be established in eastern and southeastern Anatolia, Yıldırım said: "Factories will be built here. We will build factories and the private sector will operate them. We will purchase their products for a certain period. We will prepare jobs and opportunities to eat and have a better future for our citizens and youth there. That's how we will protect our youth and people in the region from terrorism's abuses." During the parliament group meeting he was speaking at, Yıldırım cited that Turkey has continued growing non-stop over the past 26 quarters. Calling on those who bet against the Turkish economy and say it is fragile, Yıldırım said manipulation and tricks will not prevent Turkey's growth "because Turkey has the nation's party," referring to his Justice and Development Party (AK Party). Saying that democratic and economic stability has improved in Turkey, Yıldırım pointed out that Turkey managed to become one of the world's top-five growing economies during the first four months of 2016.

According to Yıldırım, the secret behind these hopeful developments is trust and stability, and "Turkey's increased trust and stability are going full speed ahead with a powerful ruling party." Stressing that they were resolutely moving towards their 2023 goals, Yıldırım said "The nation should be strong so that the state can be strong, and the state should be strong so that the nation can be strong."

Stating that they would soon submit an economic package to the assembly, Yıldırım said, "We are, so to speak, rolling out a turquoise carpet in front of the investors as long as they make investments, produce for this country and create jobs and opportunities for the people of this country."

According to Yıldırım, in a typical transaction money is spent on documents, fees, taxes and files, so investors get tired of paperwork even before they make the investment. Indicating that they were putting in place regulations to eliminate all of these hassles and provide opportunities for investors to immediately start production and contribute to the economy, Yıldırım pointed out that out-of-the-box regulations were helping to recover the investment environment. "We taking precautions to turn around the brain drain phenomenon and get [graduates] back into the country. In this context, we will provide convenience for both Turkish citizens and the citizens of other countries, including residence and work permits and citizenship in order for qualified people and experts in their fields to come to our country. Therefore, we will improve the environments that enable more investors to come to Turkey and more global investors to do business."

In addition, Yıldırım said that they will go for changes in the support they have given to farmers, and instead of giving grants and incentives throughout the year, the government will provide the farmers with a support program, which will be given twice a year and in collective amounts. Stressing that they have always been on farmers' and producers' side, Yıldırım said, "If there are fluctuations in prices affecting our farmers negatively despite the drought and the drop in production, our agriculture minister will instantaneously intervene and take the necessary measures." Yıldırım said farmers should feel relieved and continue their production.

Also, reminding the assembly that ammonium nitrate, which is important in agricultural production, was banned due to its use in bomb making by terrorist groups, Yıldırım said they have been carrying out the necessary work to replace it with another type of efficient fertilizer.

Expressing that in the terror arena, operations against terrorism have successfully ended, and in this regard, the necessary physical and social renovation work will be done, Yıldırım said they have been reconstructing the devastated areas with better buildings that best reflect the local architecture as well as a new, developed infrastructure and superstructure. Yıldırım also said they will put all necessary measures into effect so that the youth in the eastern and southeastern regions use their skills in the most efficient way possible, rather than wasting their young, dynamic brains on terrorism. Yıldırım said they will establish new centers of richness and attraction in those regions, which will include factories to be constructed by the state and managed by the private sector. He continued by adding that the government will purchase the goods produced by those factories for some time. Yıldırım, thereby, emphasized that the unemployment problem experienced heavily by all the citizens in the region will be eliminated, adding that this will in particular help the youngsters in the region to have a much brighter future through better working conditions to increase their welfare. Yıldırım said all these measures to be taken will rescue the people in the region from terrorism and its devastating effects in their lives.

Saying that unjust suffering has occurred over the past couple of years due to the implementation of General Health Insurance, Yıldırım said the Labor and Social Security Minister (NAME) was currently running new regulations that could eliminate these complaints and do everything more regularly, and they would soon submit it to the assembly. "We do not want any misunderstandings or disputes between our citizens and government. We exist if the citizens are happy. What is the meaning of being a government if the citizens are unhappy? Everything we will do will ease the lives of our citizens, improve their life quality. Regional developmental differences will be eliminated."
RELATED TOPICS