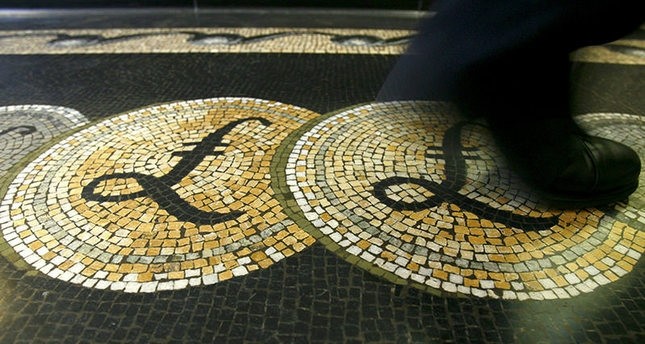 An employee is seen walking over a mosaic of pound sterling symbols set in the floor
by French Press Agency - AFP Jun 24, 2016 12:00 am

Britain's currency did a U-turn as results from Sunderland in the northeast showed voters there had opted to leave the 28-member EU by a significant margin -- 61 percent against 39 percent in favour of staying.

In neighbouring Newcastle-upon-Tyne, the margin of victory for the "Remain" camp was much smaller than expected, with just 50.7 percent of voters choosing to stay with the bloc.

The result of the vote will not be known until around 0800 GMT Friday.

However, markets had been growing increasingly confident that a so-called Brexit would be averted, although some analysts were concerned the markets could get it wrong.

In response to the initial vote results, the yen surged nearly three percent on the dollar to just above 103 -- its highest levels since 2014 -- as traders flocked to safe-haven currencies.

Investors tend to buy the yen in times of uncertainty and turmoil.

While opinion polls before the vote showed the "Leave" side with the slimmest of leads, bookmakers were giving a more decisive edge to the "Remain" camp.

Financial markets had rallied over the past four days as the pro-EU campaign has recovered momentum, but the inital vote results underscored how tight the race might be.

This week, European Commission President Jean-Claude Juncker and US Federal Reserve boss Janet Yellen were among the voices warning that a British exit could hammer world markets.

"The strong risk-on rally this week limits the upside from here on any 'Remain' outcome and sets the scene for a much larger downward correction on a shock 'Leave' outcome," said Jason Wong, a currency analyst at Bank of New Zealand.