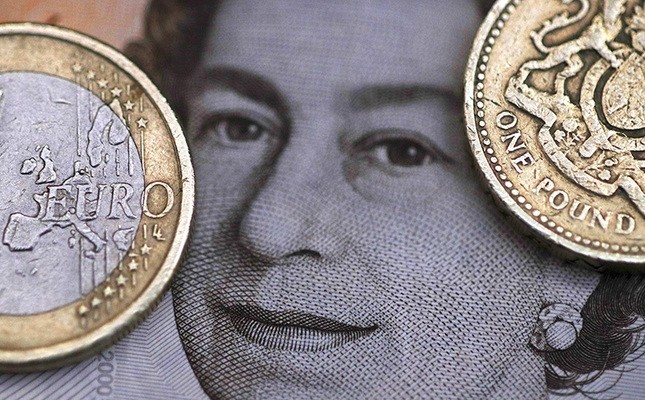 A two Euro coin is pictured next to a one Pound coin on top of a portrait of Britain's Queen Elizabeth in this file photo illustration shot March 16, 2016. (Reuters Photo)
by Daily Sabah with Reuters Jun 24, 2016 12:00 am
Sterling reversed sharp early gains while the safe-haven yen staged a rebound on Friday as confidence that Britain will remain in the European Union was badly shaken after early vote counts put the 'Leave' campaign in the lead. Upon the initial results, pound fell five percent against dollar while dollar gained two percent against Turkish lira, reaching 2.91 from 2.85.

The leave vote is on 50.8 percent, versus 49.2 percent for the remain vote, after 13 of 382 counting areas, plus partial BBC northern Irish figures were taken into account, according to Reuters calculation.

"Markets are incredibly nervous now and it's definitely tin hats time. If 'Leave' wins there will be carnage for cable (U.S. dollar/sterling)," said Joe Rundle, head of trading at ETX Capital.

As Brexit anxiety grew, so too has demand for the safe-haven yen, which jumped on the greenback and euro.

The Australian dollar, often sold off in times of heightened market stress, fell heavily against the dollar and yen. It shed more than a full cent to $0.7533. On the yen, it was back below 79.00, having turned around from 81.61 yen.

"It's very jittery and I suppose that's very much going to be the order of the day until we see final results being announced," said Robert Rennie, chief currency strategist at Westpac in Sydney.
Last Update: Jun 24, 2016 4:24 am
RELATED TOPICS