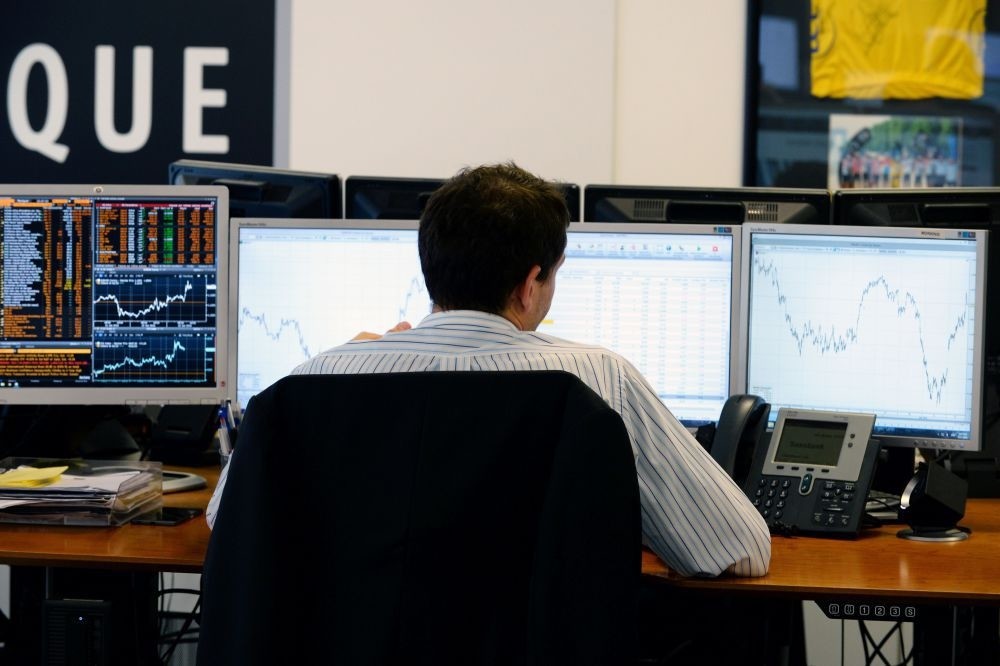 A trader checks his screens at investment bank Saxo Banque in Paris. European stocks rallied and the pound hit its highest level on Thursday as markets expected the Remain camp to come out on top in Britain's referendum on EU membership.
by reuters Jun 24, 2016 12:00 am

As markets recovered, considering the higher probability of Britain remaining in the European Union, sterling reached its peak for 2016 and world stocks gained value, bolstered by overall optimism

Sterling climbed to a 2016 high and world stocks rose for a fifth day running on Thursday, as British voters headed to the polls for a referendum on their European Union membership. Financial markets have been racked for months by worries about what Brexit would mean for Europe's stability, but the latest opinion polls show the "Remain" camp holding a small lead, providing some comfort.

The pound, which has been the lightning rod for opinion on the EU referendum throughout the six-month campaign, was up 1 percent at $1.49 as traders cut their bets on volatility after the vote. Equity markets followed suit. London's FTSE jumped 1.6 percent and Germany's DAX and France's CAC 40 surged 2.3 percent. Wall Street was expected to open up much as 1 percent and MSCI's 46-country All World index was at its highest in almost two weeks.

"You look at the markets and they expect a `Remain' win. Cable (sterling/dollar) at $1.49 this morning tells you it all," said Societe Generale FX strategist Alvin Tan. With the polls still tight and having proved unreliable in Britain's general election last year, caution remained however. Share trading across Europe was just a third of its normal level. Trading in Britain's FTSE was two-thirds lower than average, Reuters data showed.

Elsewhere, Norway's crown jumped to a 10-day high as its central bank kept interest rates steady. Traders were also digesting June's euro zone PMI data. They showed a slowdown in service industry growth more than offset greater manufacturing activity. That came a day before the results of the take-up for the European Central Bank's recently revamped long-term loans. It is now effectively paying banks to lend the cash they take on to the eurozone's firms and consumers.

Greek bonds got only a modest lift after the ECB said yesterday it would accept them as loan collateral again but would only "examine" adding them to its 1.7 trillion-euro asset-buying program.

NOT SO VOLATILE TIMES

In the United States, weekly jobless claims data will help fill the wait until the Brexit results, which are not expected until a few hours before European markets open today. Overnight, Asia had nudged up a modest 0.3 percent. A drop Chinese markets was offset by a gain of nearly 1 percent for Tokyo's Nikkei. Before the British vote, exchanges, market regulators and banks moved to tighten risk-management systems. Singapore's stock exchange said it has raised the amount of cash companies must pledge to cover trading positions Central banks have said they stand ready to pump in emergency cash.

"Most people at this point expect a rise in the market," anticipating Britain will vote to stay in the EU, said Isao Kubo, an equity strategist at Nissay Asset Management. "But you never know, and it will be clear by tomorrow, so you don't want to take new positions now."

The Brexit uncertainty kept safe-haven government bonds firm. Ten-year German and Japanese bonds were yielding 0.05 percent and 0.13 percent respectively compared with 1.33 percent for British Gilts and 1.70 percent for U.S. Treasuries. Elsewhere, the mood seemed less cautious. The main market "fear-gauge", the VIX volatility index, dropped the most in a month as safe-haven gold fell to a two-week low of $1,260 an ounce. Demand also faded for another safe haven, the yen. The dollar jumped more than a full yen to 105.74 yen and the euro gained more than 2.5 percent to 120.67 yen in its biggest jump since December. The eurozone currency also climbed against the dollar, briefly breaking $1.14. That pushed the dollar index, which tracks the U.S. currency against six rival currencies, down 0.5 percent. "Everybody is a bit shell-shocked at the way the market has moved so aggressively (towards Britain remaining in the EU)," said Saxo Bank's head of FX strategy John Hardy. "If you are stuck with a short position, you are being forced out without even knowing the result, but what this also means is that a Brexit result is now a catastrophic risk."
RELATED TOPICS