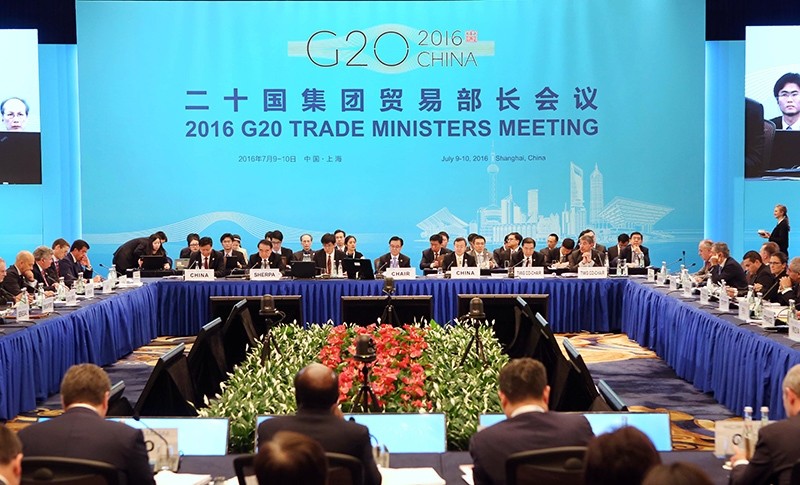 Trade ministers from the G20 nations called on their governments on Sunday to roll back anti-trade measures that have become more pervasive than any time since 2009.

Following a two-day meeting in Shanghai, the ministers said in a joint statement that they're "concerned" about rising protectionism around the world and "significantly slowed" trade growth figures. They backed a set of nine core principles for global investment policymaking ahead of the September G20 summit in Hangzhou.

China's commerce minister, Gao Hucheng, speaking to the media on Sunday, also warned that the "global economy is faced with serious challenges and is undergoing a very sluggish recovery and growth."

The comments underscored growing concerns about the global economy and the trend toward rising trade restrictions, which have deepened since Britons voted to leave the European Union, raising fears of a global recession. In his remarks, Gao did not mention Brexit, although Chinese leaders including the premier have recently expressed concern about the uncertainty that Britain's exit from the EU will bring to the world economy and markets.

Regarding what is currently the most controversial trade spat, the ministers also said they recognized that excess steel capacity is a global issue that requires "collective response" and pointed to government support of producers that have led to "market distortions."

China, among other producers, has been accused by the U.S. and Britain of dumping cheap steel and driving down global prices. The U.S. has raised tariffs on Chinese steel, while Beijing has denied wrongdoing.

In June, the World Trade Organization urged the G20 economies to dismantle anti-trade measures, 1,583 of which have been erected since 2008, with just 387 removed during that time. New trade barriers are being erected at an all-time-high pace, the WTO added.

Also last month, the World Bank cut its forecast for the global economy this year, predicting it will expand 2.4 percent, down from the 2.9 percent it expected in January.