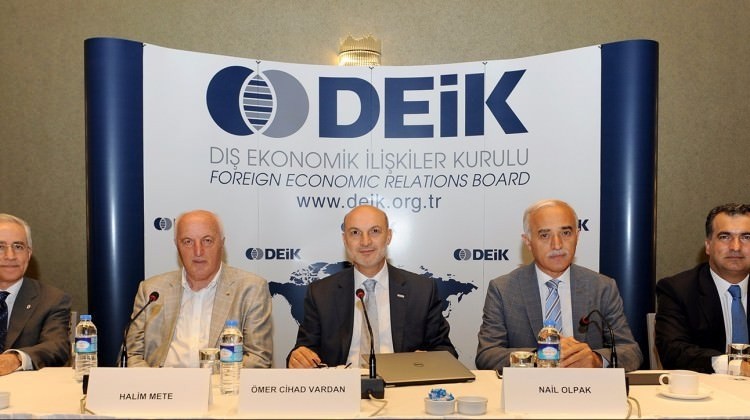 by Daily Sabah Jul 27, 2016 12:00 am
The Foreign Economic Relations Board (DEİK) issued an emergency action plan on Tuesday against the failed coup attempt by the Gülenist Terror Organization (FETÖ). According to DEİK's statement, members of executive and auditing boards and chairmen of business councils have discussed steps to be taken by the business world, with over 80 suggestions being made. During the meeting, which was attended by 120 people, the suggestions were incorporated into an 11-point action plan that will be implemented in the first stage.

The plan prioritizes flow of information to avert misleading information. A communications unit under DEİK will be established in order to share information inside and outside of the country.

The DEİK chairman and executive board members will meet regularly with the relevant ministers from the Economy Ministry, Foreign Affairs Ministry, European Union Ministry and the chief negotiator in particular, and hold comprehensive consultations.

Set to increase its contacts with ambassadors and commercial advisors the DEİK is also planning to visit the ambassadors of Germany, France, Britain, Belgium, Italy, Slovakia, the U.S, China, Japan and South Korea. In addition, a business dinner will be organized in Ankara or Istanbul with foreign mission representatives in Turkey in attendance.

The chairmen of business councils and executive boards will visit the countries they are responsible for, and tell the truth about events in Turkey by holding face to face meetings with relevant parties, think tanks, opinion leaders, media representatives, and their business partners.

The DEİK, when needed, will invite their international contacts to Turkey individually or in groups, and make sure they observe and experience the situation in Turkey firsthand.

DEİK Chairman Ömer Cihad Vardan will hold high-level meetings with various countries, EU countries and the U.S. in particular, with the attendance of executive board members and the chairmen of the related business councils. During the said meetings, they will meet with think thanks, opinion leaders, media representatives and their business partners.

The DEİK will organize networking events, as many are needed with foreign investors present in Turkey, and these events will be attended by representatives of relevant institutions and organizations.

Along with the World Turkish Business Council's (DTİK) worldwide network, the Turkish diaspora will also be put to use. The related representatives will be asked to contact public officers, press members and wing leaders in their regions.

An e-bulletin will be prepared in order to transfer the correct information to all contacts including the international press, and it will be sent at certain periods. Social media will also be actively used.

All these actions will be realized in collaboration with the DEİK's institutions that have a wide representation and network.
RELATED TOPICS