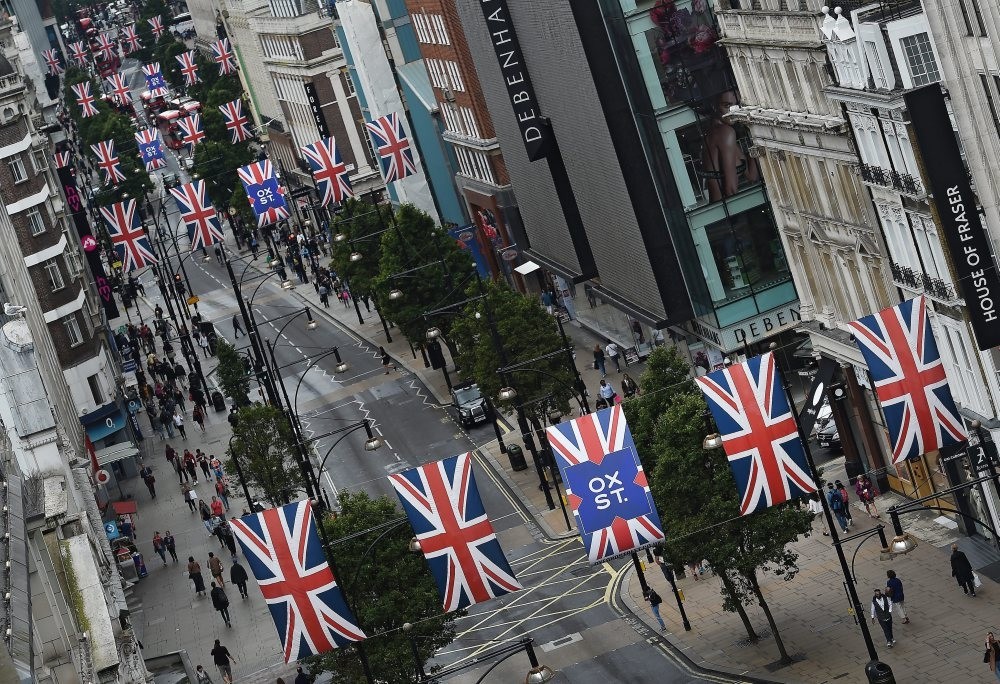 Union flags hang over Oxford Street in London on Wednesday as Britain's economy grew by 0.6 percent in the run up to the Brexit vote. Signals since the Brexit vote, however, indicate that the economy is slowing and could fall into recession.
by Associated Press Jul 29, 2016 12:00 am

While in recent years, markets have become accustomed to hearing good economic news from Britain and bad news from other EU states, the trend has started reversing with recent economic data creating alarm for Britain and signaling resilience in the eurozone

For years, Britain bragged about its economic performance, contrasting it with the neighboring eurozone, which was struggling with a series of financial crises and stagnation. The shockwaves of the "Brexit" vote suggest the roles could be reversing.

A month on from the British vote to leave the European Union, the evidence is getting clearer by the day: the eurozone economy is proving resilient to the uncertainty generated by the June 23 vote while Britain is feeling the pain.

On Thursday, a broad-based survey of economic sentiment across the EU by the executive European Commission reinforced that view.

A more detailed look at the headline number for the eurozone shows that stronger readings for industry, retail trade and construction helped offset a drop in the indicator measuring consumer confidence. By country, sentiment improved in Italy and Germany but fell modestly in France and Spain. The Commission's numbers round off a series of surveys that have been conducted in the immediate aftermath of the British vote and indicate that the eurozone is proving resilient.

"Taken together they suggest that the immediate impact of the U.K. vote has been muted and the hit to 2016 growth may be limited," said Cathal Kennedy, European economist at RBC Capital Markets. "That said we still expect that the U.K. decision to leave the EU will lower the trajectory of euro area growth into next year and are penciling in 2017 growth of 1.2 percent."

On Friday, figures are set to show that the eurozone economy grew modestly in the period prior to the referendum. The consensus in markets is that the quarterly growth rate halved in the second quarter to 0.3 percent. Similar rates of growth are anticipated for the quarters ahead.

While the eurozone appears to have brushed off the immediate impact from the vote, the same can't be said for Britain itself. The Commission's findings Thursday suggest that consumer confidence and the retail sector have been severely dented in the month since the vote, with industry and construction less so. To a large extent, the declines recorded in Britain are to be expected given the dramatic fall in the value of the pound since the referendum result and the political turmoil that the vote engendered.

U.K. indicators due in the coming months will shed more light on whether the initial hit to the economy proves lasting. Now that a new government is in place following the earlier than anticipated appointment of Prime Minister Theresa May, there could be some stabilization in British economic sentiment. An anticipated stimulus package next week from the Bank of England that will likely include a cut in interest rates could also help shore up the mood and the economy.

Most economists think there will be a sizeable drop in British economic growth in the second half of the year that will drag into 2017, largely as consumers and businesses delay spending decisions in light of the uncertainty over Britain's future relationship with the EU, its biggest trading partner. Quarterly growth rates are set to drop dramatically from the 0.6 percent recorded in the second-quarter.

"Whilst the weaker pound and the return of some of the business investment that was delayed in the run-up to the referendum could act to support economic activity in the near-term, rising inflation and declining confidence will begin to weigh on the growth in consumer spending seen since the beginning of 2015," said Sam Alderson, economist at the Centre for Economics and Business Research.

As such, the consultancy expects economic momentum to slide in 2017, with annual GDP growth forecast to drop to its lowest level since 2009, when it shrank by 4.2 percent amid the global financial crisis.
Last Update: Jul 29, 2016 1:01 am
RELATED TOPICS