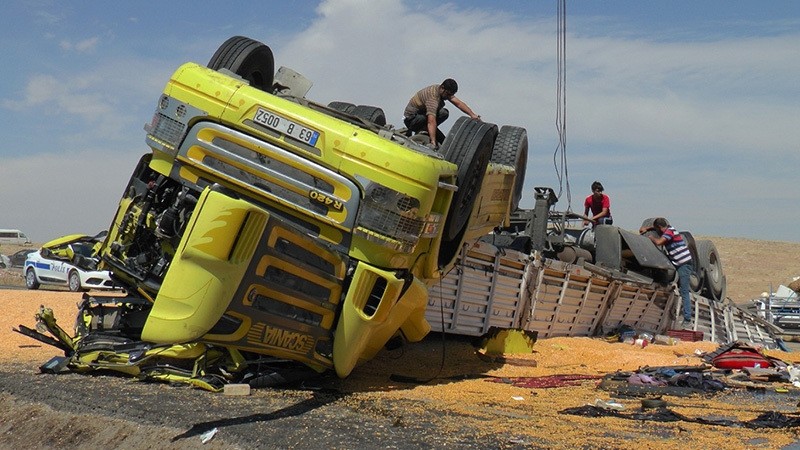 This file photo dated Sept. 04, 2016 shows an overturned truck in southeastern u015eanlurfa province. Traffic accidents were the primary cause of death in work accidents in August. (IHA Photo)
by Daily Sabah Sep 07, 2016 12:00 am

At least 199 people were killed in throughout Turkey in work-related accidents in August, bringing the numbers to an alarming level amid the country's agenda filled with crucial political and security issues.

According to the latest report of Istanbul Council for Workers' Health and Work Safety (İSİG) in August, at least 199 workers died on site in recorded incidents, including three minors.

This number was 162 in the same month last year, 160 in August 2014 and 130 in August 2014. The death toll brought together by İSİG in the first eight month period of 2016 has reached to 1,250, with June being the month in which most work-related casualties took place with 203 workers killed. If the first eight months are concerned, current trend based on monthly average shows that the year-end death toll in 2016 will surpass 2015's number of 1,730 , nearing the record deaths in 2014, the year in which 301 miners were killed in western Soma district in Turkey's deadliest work accident.

Accounting for 28 percent of work accident related deaths in August, traffic accidents, which also involve service buses used by employees, was the primary cause of deaths with casualties.

Falling, collapses and landslides and electric shocks were the ensuing causes of work accident related deaths. Armed assaults, including the ones carried out by PKK terror organization in eastern Turkey, cost some 15 workers to lose their lives.

Only 33 of the victims were self-employed in August's accidents, whereas 166 people were paid workers, pointing to the problems in implementing workplace safety measures in businesses.

Agriculture and forestry, construction and transportation were the deadliest sectors in August, accounting for some 57 percent of all work-related deaths.