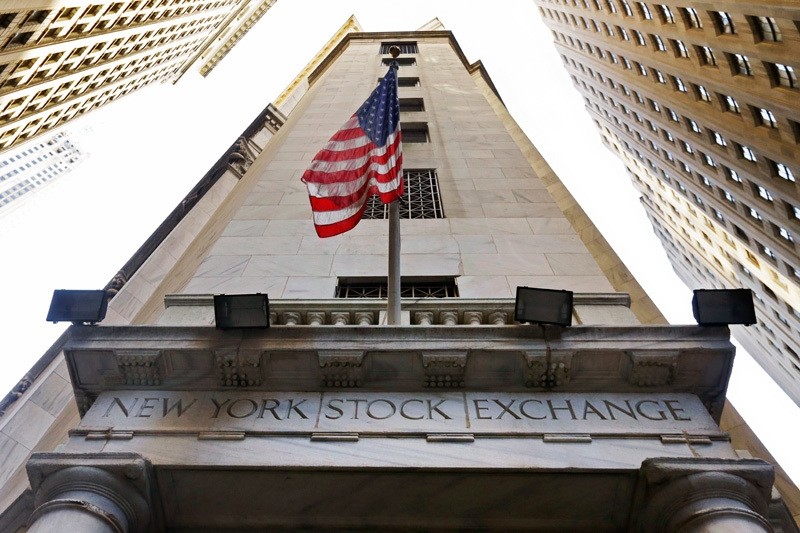 In this file photo, the American flag flies above the Wall Street entrance to the New York Stock Exchange. | AP Photo
by French Press Agency - AFP Sep 08, 2016 12:00 am

The Nasdaq was hit by a 2.1 percent drop in Apple shares after the technology giant's launch Wednesday of new iPhone models drew mixed reviews.

Equity markets in Paris and Frankfurt were both down more than one percent after the ECB, as expected, kept record-low interest rates unchanged and did not expand its asset-buying program.

Apple's introduction of two new smartphones without headphone jacks failed to spur new support for the stock of the world's largest company by market value.

Hewlett Packard Enterprise Company dropped 2.0 percent after announcing plans to spin off non-core software assets, to be merged with British software group Micro Focus. Under the deal, HPE shareholders will get 50.1 percent ownership of the new combined company and a $2.5 billion cash payment.

Dow member Intel shed 0.3 percent as it said it would spin off its cybersecurity operations as an independent company under the name McAfee. The spinoff would be made with the investment group TPG, which would own 51 percent of McAfee, leaving Intel with 49 percent and valuing the group at $4.2 billion.

Tractor Supply Company slumped 16.3 percent after forecasting that third-quarter comparable store sales would be from flat to a decline of one percent.