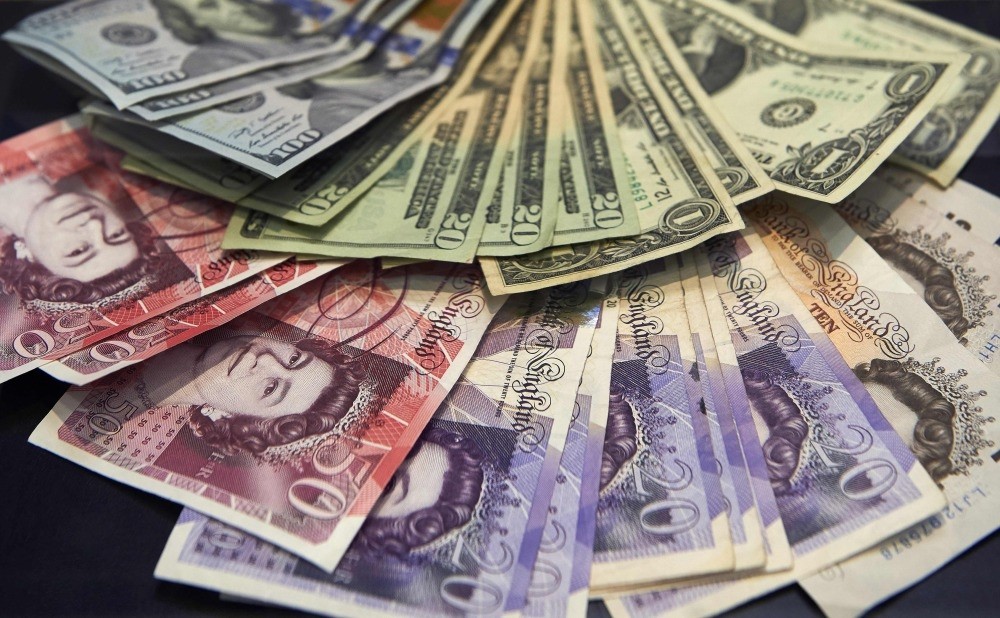 This file photo taken on Oct. 4 shows a cashier displaying multiple denominations of the US dollar and British pound.
by Oct 11, 2016 12:00 am

While the British pound was away from considerable fluctuations in its value, the dollar compensated some of its losses against a basket of currencies, following Republican candidate Trump's controversial comments about women

The British pound steadied Monday as the dollar took back some of Friday's losses against a range of currencies, while the Mexican peso surged after the damaging publication of a video of Donald Trump making vulgar comments about women.

The Bank of England's trade-weighted index, which did not price during sterling's 10 percent off-session crash in Asia on Friday, hit its lowest since 2009 as worries about the impact of Britain's exit from the European Union continued to weigh.

After its initial morning wobble, however, the pound was more stable than last week. "I believe that sterling should eventually go lower. How much lower though? I don't think we will get below the 1.15- 1.18 level we saw a few days ago in the near-term," said Brian Tomlinson, an Allianz senior fixed-income portfolio manager.

"Anything north of $1.2620 you are going to see a lot of short-covering by short-term traders. My concern is that price action is now actually stable and it actually feels like it wants to try the upside in the short term." By midday in London, the pound was trading only 0.1 percent lower than Friday's U.S. close at $1.2418 and gained a quarter of a percent to 89.87 pence against the euro. That compared with the flash crash lows of $1.1491 and 94.03 pence per euro, Reuters data shows.

The Mexican peso, which has been pressured since May by Trump's promises to clamp down on immigration and rethink trade relations, surged as markets trimmed the chances of a victory for the Republican nominee in next month's elections.

The Mexican currency rose about 2 percent to 18.91 to the U.S. dollar in early Asian trade -- its highest level in nearly a month -- and held on to the bulk of its gains after the second presidential debate between Trump and Democrat Hillary Clinton. It last stood at 19.018, still up about 1.5 percent.

The peso is unlikely to break above the trading ranges seen since June, even if more position-squaring takes place, said Wu Mingze, FX trader of global payments for financial services provider INTL FCStone in Singapore.

"A full-unwinding of the 'Trump Trades' should only bring us to the levels between the 18.00-19.00 consolidation zone," he said. In a video released on Friday, Trump is heard talking on an open microphone in 2005 about groping females and trying to seduce a married woman.

The controversy pitched Trump into the biggest crisis of his 16-month-old campaign and deepened fissures between him and establishment Republicans.

"The Brexit vote has ushered in a new and more dangerous phase for markets in which political developments have a much stronger bearing on sentiment," said Nicholas Spiro, a partner at London-based consultancy Lauressa Advisory. "While the Mexican peso -- the most liquid emerging market currency and the most reliable gauge of 'Trump risk' - has given sterling a run for its money this year, it's the pound that has become a proxy for politically driven volatility in markets."