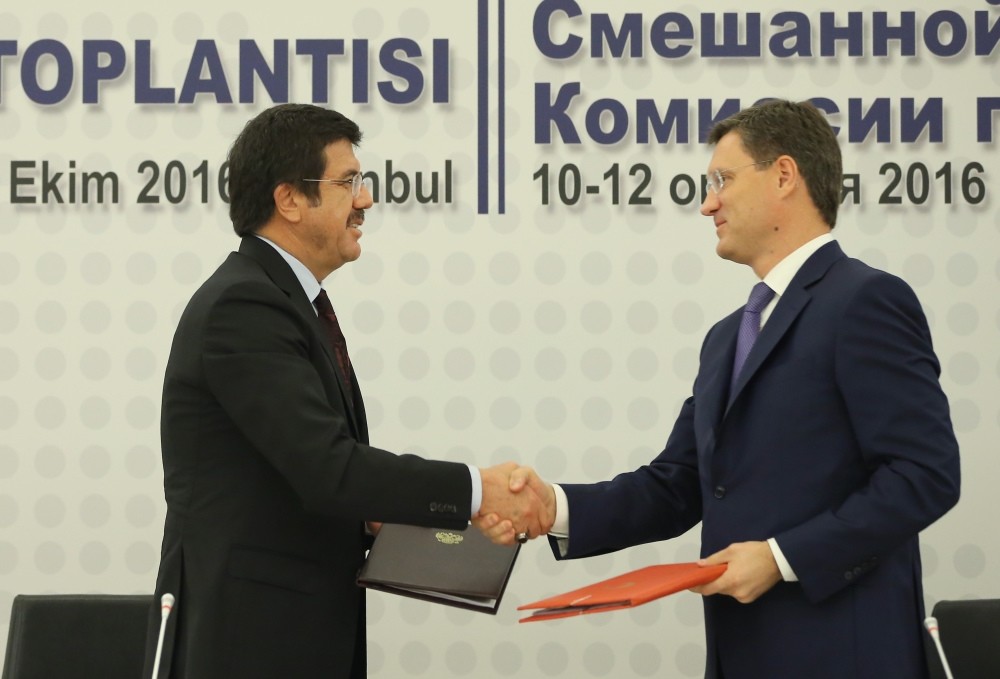 Ankara and Moscow are seeking ways to bring economic relations to pre-crisis levels. As the Joint Economic Commission Protocol was signed in Istanbul Wednesday, Minister Zeybekci announced their aim to complete a free trade deal in 2017

Economy Minister Nihat Zeybekci said Ankara aims to create a reality where there will no obstacles between Turkey and Russia in trade and economy. The two countries aim to finalize a free trade agreement in 2017. Minister Zeybekci and Russian Energy Minister Alexander Novak signed the Joint Economic Commission protocol in the 14th meeting of the Turkish-Russian Intergovernmental Joint Economic Commission.

Speaking at the signature ceremony, Minister Zeybekci said Turkey and Russia have recently developed an intense friendship and relationship. Pointing out that Turkey and Russia are two important economies in the same region, Zeybekci said they are not rivals but two substantial economies with the capacity to supplement each other. Stressing that one has advantages that the other does not, Zeybekci said they have beneficial cooperation; therefore, in addition to friendly relations, economic relations between the two countries will rapidly improve.

Economic relations between Turkey and Russia were almost frozen after Turkey downed a Russian jet that violated its airspace near the Syrian border on Nov. 24, 2015. Moscow implemented some sanctions on Turkish goods and services and banned its citizens from traveling to Turkey. However, normalization started in June as President Recep Tayyip Erdoğan sent a letter to the Kremlin saying he regrets the situation, and now the two countries are seeking ways to bring relations to the pre-crisis level.

Recalling that both countries were negatively affected by the measures and limitations brought in the aftermath of the unfortunate developments that occurred in November 2015, Zeybekci said that distance has been covered to go back to the same conditions and standards of the pre-November period and stressed that but for a few simple issues, everything will be clear.

Highlighting that they mutually completed the Medium Term Program (MTP) and held the Joint Economic Commission meeting, Zeybekci stressed, "A great distance has been swiftly covered "with a mutual understanding with regard to the free trade agreement that possesses historical meaning between the two countries." Zeybekci said they aimed to complete the free trade agreement covering services and investments between Turkey and Russia by the end of 2017 and will later discuss other issues such as fields it will develop. "Our aim is to create a reality where there will no obstacles between Turkey and Russia in trade and economy."

Stating that the Joint Economic Commission protocol was prepared by both the Turkish and Russian sides, Zeybekci said that they held talks in terms of lifting obstacles to energy, tourism, transportation and agricultural products, which play an important part in commercial and economic relations between the two countries.

According to Zeybekci, as mentioned in the bilateral meetings between the two country's leaders, only the obstacles in front of fruit were lifted and trade will swiftly continue. Stressing that talks related to fresh vegetables are in progress, Zeybekci said he asked his Russian counterpart to include fresh grapes in the fruit group since the grape season is ending and received a promise that he will look into it as soon as he goes back to Russia.

Suggesting that they are covering an important distance in terms of currencies that will be used in commercial relations between the two countries, Zeybekci said the Turkish-Russian Investment Fund, which will be established with capital of $1 billion, will play an important part in projects where Turkish and Russian companies jointly participate in other countries.

Zeybekci recalled that he spoke to Minister Novak about holding the Joint Economic Commission meeting in Russia, and it will be organized at the most suitable date in 2017.

Touching on the 87th İzmir International Fair, Zeybekci said they suggested Russia be an honorary and partner country in one of world's oldest and most popular fairs and they accepted with pleasure. "Hopefully, we will watch a very powerful Russian show in August 2017. We, as Turkey, will wait for it with great enthusiasm," Zeybekci said.
RELATED TOPICS