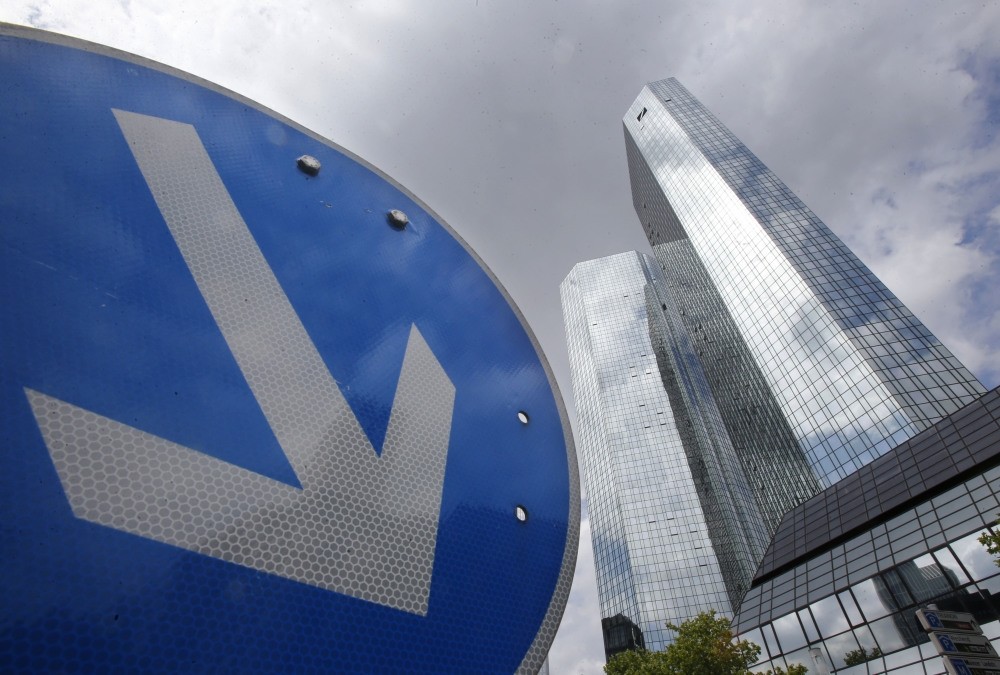 The headquarters of Deutsche Bank is photographed in Frankfurt.
by Associated Press Oct 18, 2016 12:00 am

Almost a decade after the financial crisis ravaged the global economy, economists and top officials are warning that troubles in the banking system are keeping growth slow and unemployment high

Almost a decade after the financial crisis that ravaged the global economy, analysts and top officials are warning that too many banks in Europe are struggling financially, keeping them from lending to companies and fostering growth.

Calls to fix the problem have come repeatedly from the International Monetary Fund, U.S. Treasury Secretary Jacob Lew, and European Central Bank chief Mario Draghi. They say something has to be done if Europe's economy is to gain more traction and bring down unemployment.

Here is a look at Europe's slow-burning banking crisis and how it hurts the economy.

Soured loans are one of the biggest problems, especially in Italy. They create a vicious cycle: the slow economy means businesses can't repay their loans. That leaves the banks short of cash to finance new business ventures, which holds back the economy even more.

Getting rid of the bad loans is a struggle. Italy's Monte dei Paschi is trying to offload 27.7 billion euros ($31 billion) in such loans to investors who would buy them at a deep discount. The bank has to get rid of those problem assets before it can credibly ask investors for more money — up to 5 billion euros through a share offering.

In Italy, one reason clearing bad loans can be difficult is that the courts are clogged, meaning it can take years to pursue the debtors and recover money. That makes the assets worth even less, and the lower the price, the bigger the financial hole the bank has to fill.

Banks under financial pressure, meanwhile, tend to prop up "zombie" companies by extending loans rather than pressing for repayment. A group of economists has found that banks under stress tend to maintain credit to companies they already have a relationship with, even if those companies are struggling. Yanking credit to such companies would mean recognizing the bank's own losses on the loans. That leaves both bank and companies as walking dead, technically still in business but unable to grow, and gobbling up credit that could otherwise go to stronger companies.

"Creditworthy firms in industries with a prevalence of zombie firms suffered significantly from credit misallocation, which slowed down the economic recovery," wrote the four economists: Viral Acharya at New York University's Stern School of Business, Tim Eisert from Erasmus University Rotterdam, Christian Eufinger at IESE Business School in Barcelona and Christian Hirsch at the Goethe University in Frankfurt.

The economy of the 19 eurozone countries grew by a quarterly rate of 0.3 percent in April-June. That's not enough to bring down the 10.1 percent unemployment rate quickly enough.

FALLING STOCKSWeak share prices for banks have compounded the problems, as they make it harder for banks to raise money from investors. The STOXX Europe 600 Banks index is off 21.9 percent this year, compared with a milder 7 percent drop for the broader STOXX Europe 600. Deutsche Bank is off 52 percent for the year to date; Monte dei Paschi is off 86 percent and Switzerland's Credit Suisse 37 percent. Deutsche Bank's shares plunged after it was reportedly facing a fine of up to $14 billion dollars related to dealings in bonds backed by shaky mortgages before the financial crisis.

SKIMPY PROFITS, BIG PROBLEMSAll of this would be less of a problem if banks made enough money to build new capital reserves. But earnings have been sagging, too. Return on banks' loans and investments has not recovered to the levels seen before the crisis. Even banks in countries that have had fewer problems — Austria, France, and Germany — have seen returns rebound only to around 0.8 percent from 1.3 percent before the crisis. Deutsche Bank made a scant 20 million-euro profit in the second quarter despite 7.4 billion euros in revenue. That followed a 6.7 billion-euro loss in 2015.

If banks earned more money, they could attract investors more easily. "The answer is profitability," said Jan Pieter Krahnen, a professor of finance at Frankfurt's Goethe University. "As soon as profitability is back there will be plenty of capital, because people will be happy to invest. "Banks argue that part of the problem is that the ECB has slashed the interest rate benchmark to zero, which squeezes bank's profit margins.

TOO MANY BANKSThe ECB and IMF argue that European banks should fix their underlying business models: their costs are too high and they have too many branches.

That's particularly true at a time when more banking is done online. In some countries, customers can withdraw cash at grocery stores and gas stations as they check out with the milk and broccoli - no teller involved. The answer may be mergers and job cuts across national boundaries. "We have seen almost nothing in terms of restructuring the industry, which should have happened over a couple of years, and which is now even more urgent than before, not so much because of the crisis but because of technological change," Krahnen said.

The new rules, which took effect this year, are meant to protect taxpayers from picking up the bill for rescuing banks — as happened during the financial crisis, overwhelming entire states' finances as in the case of Ireland.

The restrictions raise the possibility that shareholders and junior bondholders — investors who loaned the bank money without getting collateral or a promise of priority repayment — would be required to take losses before government money could be used.

However, in some cases, such as Italy's Monte dei Paschi, those investors are mom and pop savers. So a rescue could mean wiping out the life savings of thousands of small investors.