Economy Minister: Weight of food prices on inflation basket to be below 20 pct 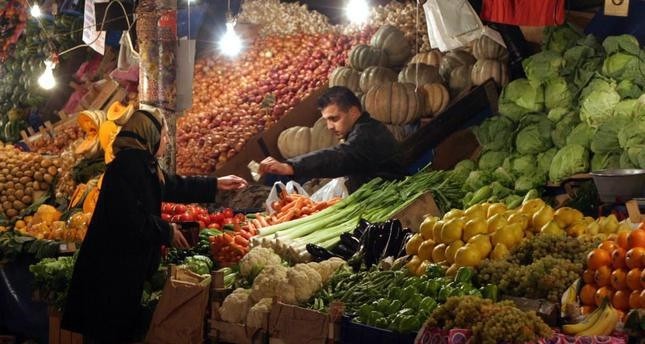 by Daily Sabah Oct 20, 2016 12:00 am
The country's economic administration has initiated studies to bring down the inflation stemming from food prices. Economy Minister Nihat Zeybekci said the weight of food prices on the inflation basket will be reduced to below 20 percent at the end of the year from 24 percent currently.

Speaking to journalists at the inauguration of Design Week Turkey 2016, Zeybekci stressed that they will efficiently use intervention methods, including the increase of food imports, to reduce the inflation stemming from food prices. He added they will determine the inflation basket through surveys to see new results.

According to Zeybekci, it goes against mathematics that the weight of food prices, which was around 28 percent on the inflation basket when Turkey's national income was $3,000, to be around 24 percent when the country's per capita income has increased to $9,500. He said the burden of food prices in inflation in other countries with similar wealth is less than the one in Turkey, adding that this figure varies between 17 percent to 18 percent in Mexico and is below 20 percent in Bulgaria, Poland, Romania and Slovakia. The minister added, "Even a 0.5 percent reduction in inflation affects interest rates that are applied for both private and public sectors."

The government has decided to implement a number of measures in production, distribution and trade channels to reduce the weight of food prices on the inflation basket. The Food and Agricultural Products Market Monitoring and Evaluation Committee will prepare reports on the products running surpluses and deficits in supply in advance in order to bring a healthier structure to the supply-demand balance in production.

The food price inflation issue involves a wide range of areas from production to marketing. Economic administration will eliminate problems in this chain and support producers through interventional purchases. It will also bring an end to rigidness in service utility bills stemming from food. The Competition Board will be authorized to intervene on food prices at any time and launch alternatives to prevent artificial pricing. The government will maintain incentives to merge small producers.

The Customs and Trade Ministry will determine, then reduce costs in all phases from the production to the marketing of products. To this end, the Food and Agricultural Products Market Monitoring and Evaluation Committee, which also represents the Central Bank of the Republic of Turkey (CRBT), will carry out field studies and stock tracking to make a list of deadlocks facing the food sector and create solution-oriented action plans. It will also reduce the number of links in the marketing process, one of the most significant factors in rising food prices, in addition to regulating the wholesale vegetable market and logistical activities.
RELATED TOPICS