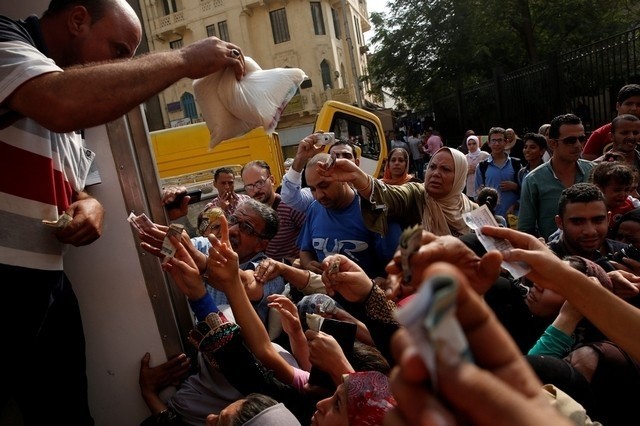 A policeman tries with other Egyptians to buy subsidised sugar from a government truck after a sugar shortage in retail stores across the country in Cairo, Egypt. (Reuters Photo)
by Oct 25, 2016 12:00 am

Egyptians are tired with the government's lack of vision on the country's struggling economy as inflation remains in the double-digits, while the sugar shortage increases fears about food security and the weakening currency

A cartoon which appeared on social media shows a drowning Egyptian, only his hand protruding from the depths, waving for help. The next strips show President Abdel Fattah al-Sisi diving in, taking the drowning man's watch and turning away. The cartoon captures the mood of desperation and anger among Egyptians clobbered by tax rises, soaring food price inflation and cuts in state subsidies. Some fear a repeat of the mass street protests that drove Sisi's two immediate predecessors from power.

Core inflation is at seven-year-highs, near 14 percent, as a foreign exchange shortage and a hike in customs duties bite hard in a country that imports everything from sugar to luxury cars. The government raised electricity prices by 25-40 percent in August and is phasing in a 13 percent value-added tax approved by parliament in the same month.

As part of reforms aimed at clinching a $12 billion IMF loan needed to plug its gaping budget deficit, the government is also expected to cut petrol subsidies and devalue the Egyptian pound, prompting a further cycle of inflation in Egypt, where tens of millions rely on state-subsidised bread.

"Prices are rising daily, not monthly," said Gamal Darwish, a civil servant, as he queued to buy subsidised sugar in Cairo. "This situation will push people to do bad things. It could slip out of hand and the government will not be able to control it because if the poorest cannot get enough to eat they will steal. If someone has children to feed, what will he do?"

The government has tried to win public support for the austerity measures with a billboard campaign and media blitz and has also sought to expand social security schemes to shield the poorest from the effects of the rising prices. But many Egyptians who would not qualify for such schemes complain they can no longer afford meat, while sugar shortages have driven fears of an impending food crisis.

Social justice was one of the key demands made by protesters during the 2011 revolt that ended Hosni Mubarak's 30-year rule. In 2013 Egyptians again filled the streets to protest against Mohammed Mursi, the Muslim Brotherhood official who was democratically elected after the uprising. Three years after Sisi, an army general, ousted Mursi and seized power, his promise to restore stability is wearing thin.

The arrival of sugar in a government van caused a frenzy in the working class district of Sayyida Zeinab on Tuesday, as people jostled, 10-pound-notes in hand, for 2-kilo rations.

"After two revolutions, the Egyptian people are going backwards not forwards," said Abdel Hasib Ahmed Mohamed, a middle-aged court employee watching the sugar scrum. "We are heading for an explosion and this time it won't be peaceful."

For the government, the case for economic reforms and the need to seal a planned three-year lending program with the International Monetary Fund is clear. Egypt's economy is likely to grow 3.5 percent in the 2016/17 fiscal year, a Reuters poll showed on Thursday, missing the government's target of about 5 percent and dipping below last year's growth rate.

The budget deficit is near 10 percent of national output. The foreign currency shortage has made it hard for firms to import and foreign investors to repatriate profit. Some have shut shop after nearly two years of capital and import controls. Dollar rationing at banks has driven businesses toward the black market where the dollar is now selling for more than 15.5 pounds - a huge mark-up from the official rate of about 8.8.

Egypt's IMF program has yet to win the lender's final approval because the government must first muster $6 billion in bilateral financing, giving it the cash buffer it needs to devalue and ditch its fixed exchange rate. The IMF has said it is helping Egypt to secure the necessary funds.

The government said this week it had secured 60 percent of the bilateral funds, boosting foreign reserves to $19.6 billion in September. Central Bank Governor Tarek Amer has said he would consider floating the pound once reserves hit $25 billion. But the rising prices and periodic shortages in state-subsidised food have forced the government to increase its purchases, burning rapidly through those newfound dollars when it is meant to be cutting spending. The pound's continued depreciation on the black market since the IMF deal was announced in August also poses a big challenge.

If the central bank makes a meagre adjustment in the exchange rate, economists say, downward pressure will continue to mount on the pound. But if it makes a 6-8 pound adjustment, the political and social impact could be explosive.

Although the black market rate is already priced in across much of the private sector, a steep devaluation would prove costly for the government, which imports thousands of tonnes a month of vital commodities including wheat and oil for its food subsidy programme as well as gas for its power stations.

Rumours have spread that Nov. 11 will be a day of protest over economic conditions. Police have already detained about 70 people for inciting protests, accusing many of loyalty to the Muslim Brotherhood. Under Sisi the Islamist group has been banned as a terrorist organisation - a charge it rejects.

"Food price inflation in Egypt .... fell a bit year-on-year in September, but for the poor it is still for me at a level that is politically toxic," said Angus Blair, Chief Operating Officer at Pharos Holding, a Cairo-based investment bank. "It is a worry, especially with calls for a demo on Nov. 11."

In his speeches, Sisi has sought to persuade Egyptians that a collective sacrifice is necessary to save the country from financial ruin, even urging people to donate fakka, or spare change, in comments that drew online derision. But Sisi, who has crushed the Brotherhood and jailed secular dissenters, has also warned that the army could be deployed within six hours in case of trouble on the streets.

There has been no sign so far of the mass protests of 2011 or 2013, though anger over an increase in social housing costs turned into a street demonstration by hundreds last week in Port Said, near the mouth of the strategic Suez Canal. Fear for the future is not limited to poorer Egyptians, and businessmen who struggle daily with the dollar crisis are among the most concerned.

"The dollar crunch is so bad that things have been piling up at the port for a long time and you cannot get them out. Dollars are not available... and the situation is deteriorating," said Ashraf Morcos, who runs an import-export company.

Some new policies seem at odds with the government's reform drive. For example, the Supply Minister said this week the state would increase, not cut, subsidies on food smart cards, which give Egyptians points to claim against bread and other items. "This government has no vision, it is not transparent about its policies," said Morcos. "At this point, the country doesn't need rhetoric. People need their basic necessities, to eat and drink..."