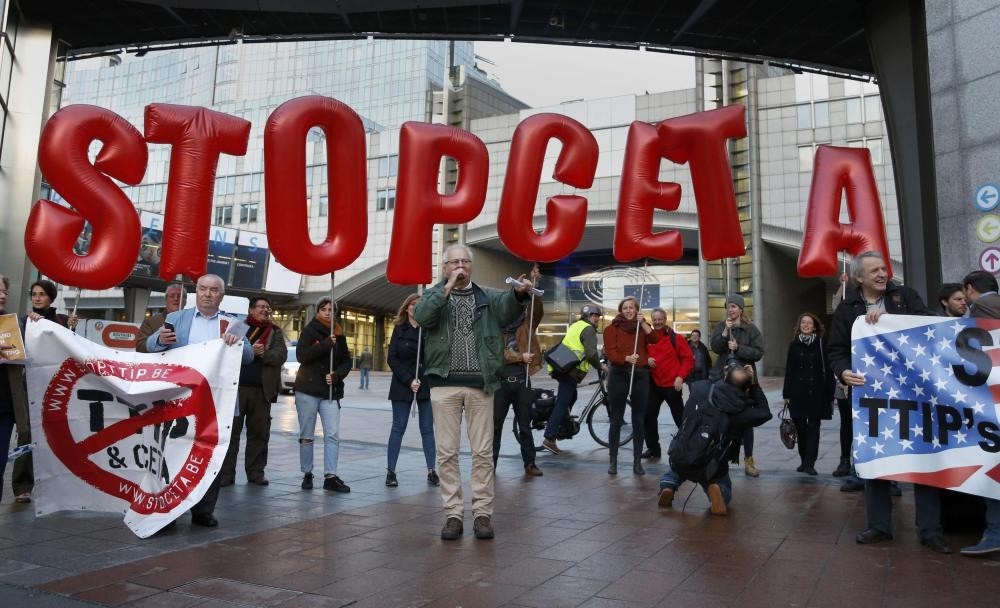 Demonstrators protest against CETA outside an EU summit in Brussels, Belgium.
by Oct 26, 2016 12:00 am

Canada's hope of securing access to a market of 500 million people and reduce its dependence on the U.S. faces an uphill battle against the bureaucratic nightmare that is the EU

The looming failure of free trade talks with the European Union would derail Canada's push to reduce its dependence on the United States and potentially complicate negotiations with other nations, such as India and China.

The EU's hopes of signing the pact this week appeared to evaporate on Monday as the Belgian federal government failed to win the consent of regional authorities necessary to approve the deal. The European deal would have given Canada preferential access to a market of 500 million people, more than the North American Free Trade Agreement (NAFTA), at a time when the U.S.-Canadian partnership is under pressure. Canada sends 75 percent of all its exports to the United States.

"We are one of the most dependent countries in the world in regards to trade," said former Quebec Premier Jean Charest, who initiated negotiations for the EU-Canada trade deal during his tenure. "If this agreement fails, it will be a disappointment," he told Reuters on Friday in Montreal.

It would leave Canada, which is desperate to revive a sluggish export sector, in the predicament policymakers have tried to avoid: overly dependent on the United States, where both presidential candidates have talked about changing NAFTA. Getting the Comprehensive Economic and Trade Agreement (CETA) through would be a coup for Prime Minister Justin Trudeau who has pressed other countries to resist protectionist sentiment ever since taking office in November.

With NAFTA under pressure and a proposed 12-nation Pacific area trade deal on life support, Canadian officials pushed hard to try and overcome hurdles to CETA in various European states. Along the way, however, Canada made concessions that could make it less attractive for future potential trading partners.

SLOG FOR THE FUTURE

Increasing public backlash against globalization, one of the main challenges for the EU deal, means none of the deals Canada is working on could happen soon, said Carleton University trade policy professor Michael Hart.

The need to diversify away from the United States was one of the reasons Trudeau vowed to boost trade with China and India and with CETA in doubt, there will be fresh impetus to press on with those trade deals.

One person close to the discussions, however, said Ottawa would struggle to speed up the pace of those talks.

Discussions with India are going very slowly, in part because the Indian civil service is over stretched, and there is no guarantee the negotiations will succeed, said two people familiar with the talks.

Meanwhile, the Liberal government is split over what concessions to make in free trade talks with China, which wants Canada to ease curbs on investment in key sectors such as energy. Opinion polls show most Canadians oppose the idea of an China agreement, which insiders say is at least a decade away. The Trans-Pacific Partnership deal that Canada signed in February looks set to fall victim to political discord in the United States, killing off much-prized access to Japanese markets for Canadian beef. "For trade policy people, it's going to be a very long slow tedious slog for the future," said Hart, a former long-time Canadian foreign ministry expert who advised on NAFTA. Asked whether Canada would redouble efforts to strike trade deals with China and India if the European deal died, Freeland told reporters on Monday that her "absolute and relentless focus" this week would be on CETA. One reason officials refuse to concede the deal's collapse is that the European agreement, which backers say could boost bilateral trade by 20 percent, promises most imminent and tangible benefits.

With a proposed free trade deal between the EU and the United States at best years away, some U.S. firms close to the Canadian border might consider moving operations north to take advantage of European market access, said Jason Langrish, executive director of the Canada-Europe Roundtable for Business trade lobby. "This is the last hope," he said.