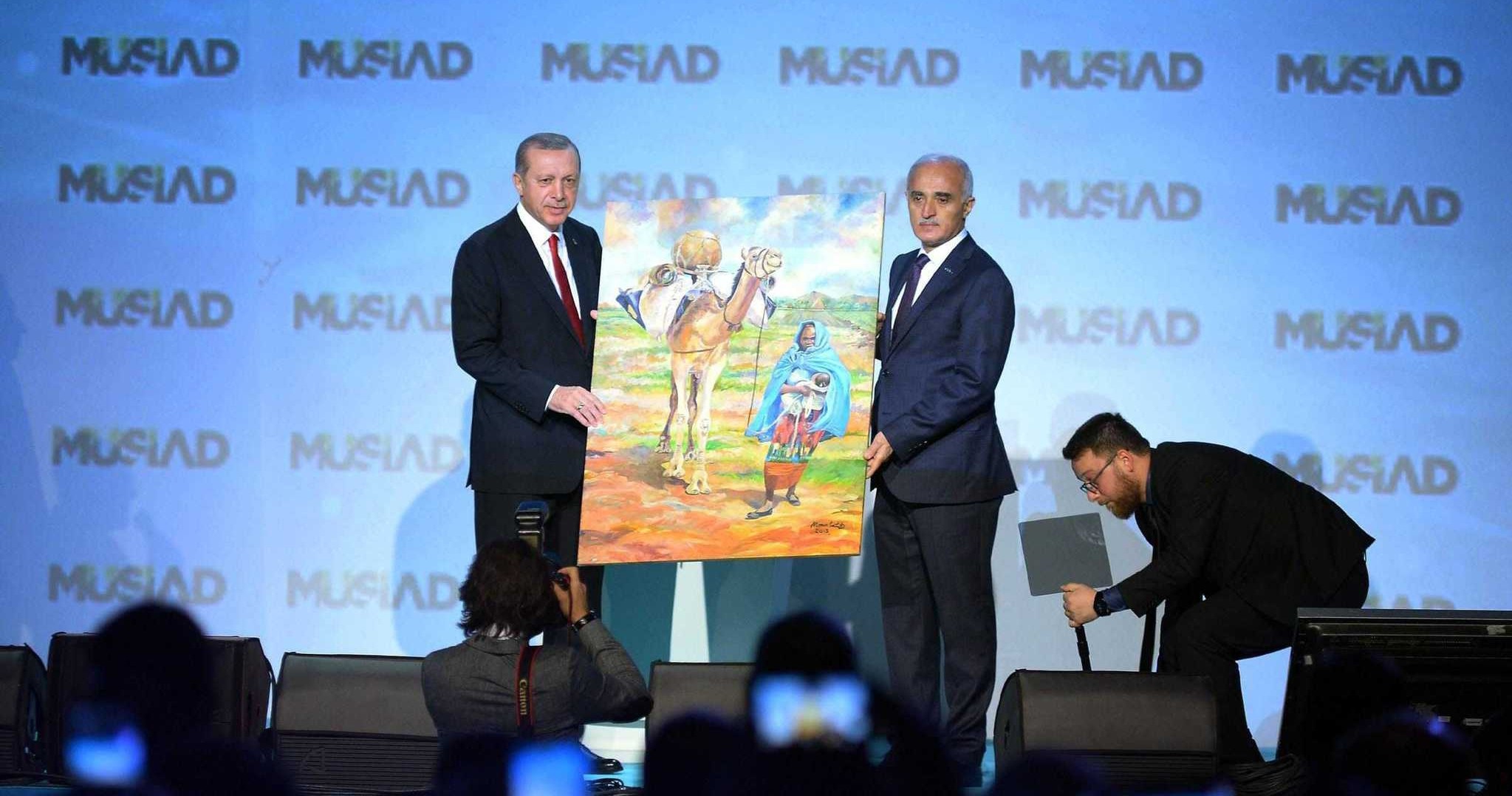 Mu00dcSu0130AD Chairman Nail Olpak (R) presents an African artistu2019s painting to President Erdou011fan.
by Daily Sabah Nov 10, 2016 12:00 am
Thousands of businessmen from countries around the world have come together for three events hosted by the Independent Industrialists' and Businessmen's Association (MÜSİAD) at the 16th MÜSİAD EXPO at the Istanbul CNR Expo Center. The expo has opened its doors to visitors with a ceremony attended by President Recep Tayyip Erdoğan.

Having been organized since 1993, the 16th MÜSİAD EXPO has taken Africa into focus which is also underlined by President Erdoğan during his speech. Erdoğan said members of MÜSİAD should take action with the Turkish government to rebuild African countries. Erdoğan said he will continue his visit to African countries with business delegations to urge them partner up with African businesspeople.

The 16th MÜSİAD EXPO will be held from Nov. 9-12, featuring the 20th International Business Forum (IBF) and the 3rd High Tech Port events offering opportunities for cooperation with international businesspeople.

Under the theme of "Innovation, Economy and Investment Ecosystem," the 20th IBF event and the visionary High-Tech Port project by MÜSİAD bringing military and civil delegations together with leading representatives from the defense and aviation sectors is taking place at the CNR Expo Center as part of the 16th MÜSİAD EXPO.

The slogan of the expo, "Business is here", speaks of the new opportunities for trade cooperation and global partnerships offered to businessmen and investors from over 100 countries at the 16th MÜSİAD Expo. Thousands of domestic and foreign businessmen and roughly 700 companies is being hosted in a business platform in a 100,000 square-meter area of Hall 8 at the CNR Exhibition Center. More than 100,000 national and international participants are expected to visit the event.

The event is preceded by the 15th MÜSİAD EXPO in 2014 which hosted 746 national and international exhibitors from 24 countries and 7,246 international businessmen from 123 countries, including the 18th IBF and the very first High-Tech Port project by MÜSİAD that was held in an indoor, 100,000 square-meter area with a 27,000 square-meter standing area where President Recep Tayyip Erdoğan's inauguration at the Istanbul CNR EXPO Center was held on Nov. 26-30 of that year. The 2014 MÜSİAD EXPO was a huge success and gained a high satisfaction rate from participating businesspeople including the 150,000 visitors who attended. The 16th MÜSİAD EXPO will feature special booth areas for leading industries including printing, publication and media, consultation and training, durable goods, food, services, construction, logistics, machinery, health, defense industry and textiles.

With its large trade capacity and domestic and foreign attendants from all around the world, the MÜSİAD EXPO has been organized since its debut in 1993 and is held every two years in Istanbul.

MÜSİAD was founded in 1990 as an independent, non-profit businessmen's association with no political affiliations. It has 12,000 members who represent 46,000 companies and 1.6 million people from the labor force. MÜSİAD reaches its members and businessmen from 86 branch offices across Turkey as well as 168 liaison offices in 65 countries all over the world.
RELATED TOPICS