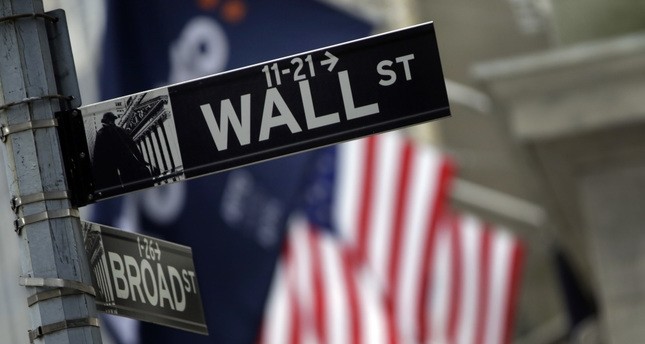 File photo shows a Wall Street sign adjacent to the New York Stock Exchange.
by reuters Nov 10, 2016 12:00 am
Bank stocks and industrials surged on Thursday while Apple and other technology shares sank as Wall Street rearranged its bets to benefit from Donald Trump's presidency.

The S&P 500 financial sector surged 4 percent to its highest level since the 2008 financial crisis, bringing its gain since Trump's surprise victory in Tuesday's election to 8.1 percent. That put it on track for its biggest two-day gain since 2011.

Wells Fargo & Co jumped 7.6 percent, JPMorgan Chase rallied 4.66 percent and Bank of America surged 5.34 percent, also helped by a rise bond yields that are the result of expectations of inflationary spending by Trump.

Trump has also sided with leading conservatives in calling for the repeal of the 2010 Dodd-Frank Financial Reform Act largely opposed by banks.

"The Trump campaign did say it would repeal Dodd-Frank. Rates are higher and the yield curve is steeper. Those are all good things for the banks," said Warren West, principal at Greentree Brokerage Services in Philadelphia.

The market got a lift after St. Louis Federal Reserve President James Bullard said the Republican sweep of the White House and Congress could break the current gridlock over national policy in a potential boon to the U.S. economy.

Industrials trailed the financials with a 2.15 percent advance.

Macy's rose 5.9 percent after the department store operator raised its full-year sales forecast and announced a partnership to monetize some of its real-estate assets.

Walt Disney and Nordstrom were expected to report earnings after the market closes.

Declining issues outnumbered advancing ones on the NYSE by a 1.02-to-1 ratio; on Nasdaq, a 1.67-to-1 ratio favored advancers.