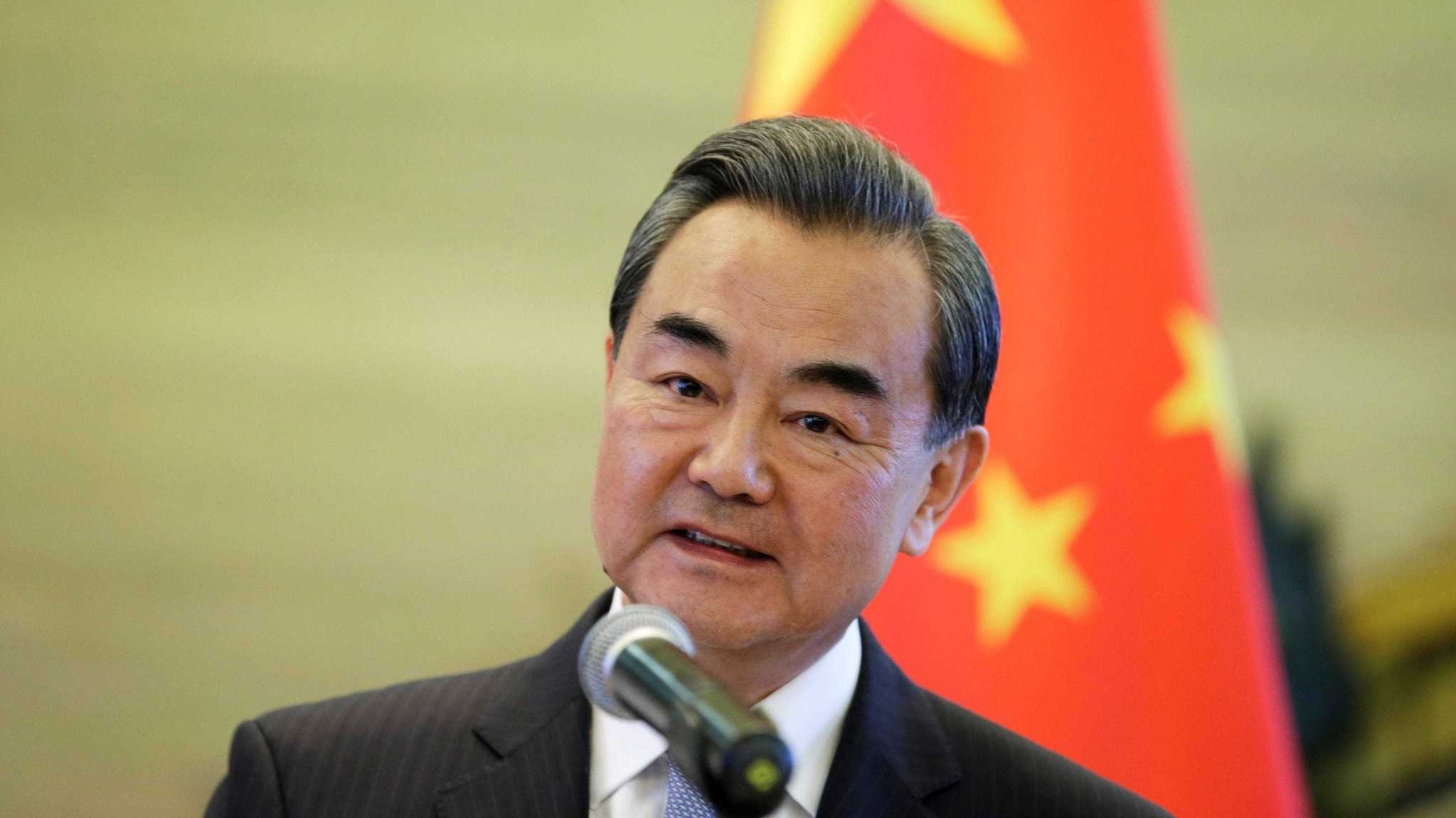 Considering Turkey as a major country in the region and placing high premium on its crucial role in regional and international affairs, Chinese Foreign Minister Wang Yi indicated that the Turkish and Chinese sides are currently discussing a number of win-win projects

Chinese Foreign Minister Wang Yi said Turkey is a major country in the region and placed a high premium on Turkey's significant role in the regional and international affairs, approaching the bilateral relationship from a strategic perspective. Answering Daily Sabah's questions during his visit to Ankara, Minister Wang Yi said that practical cooperation between China and Turkey covers a wide range of areas from energy to infrastructure, adding that currently the Turkish and Chinese sides are also discussing a number of other win-win projects.

Underlining Turkey's important role in connecting with China's "Silk Road Economic Belt" initiative, Minister Wang Yi said that it will be an important building block of the transport corridor, linking Asia and Europe, acting as a "Steel Silk Road" running all the way from China to London.

Speaking about the Chinese companies that are negotiating with their Turkish partners for the Edirne-Kars high-speed railway, Minister Wang Yi emphasized that the construction of this project will give a strong boost to Turkey's economic and social development. The minister also said that they welcome the initiative to hold the "Turkey Tourism Year" event in China in 2018, while adding that last year the number of Chinese tourists visiting Turkey exceeded 310,000, up by 57 percent compared to the previous year.

Daily Sabah: How would you characterize the current state of China-Turkey relations?

Wang Yi: Since last year, President Xi Jinping and President Recep Tayyip Erdoğan have met three times and reached important understandings on a range of issues. This has given a strong push to the strategic cooperation between China and Turkey.

Just a week ago, Chinese Vice Premier Wang Yang visited Turkey for the first meeting of the Intergovernmental Cooperation Committee (IGC). Today, I am in Ankara to hold the inaugural meeting of the foreign ministers' consultation with Minister Çavuşoğlu. These two mechanisms have been established pursuant to the important agreement reached between our presidents. The fact that the two high-level meetings are taking place one after the other speaks to the strong commitment of both sides and the strength of China-Turkey relations.

This year marks the 45th anniversary of China-Turkey diplomatic ties. Our relations have traveled an extraordinary journey in these 45 years and reached a stage of maturity and steady development. Most notably, thanks to the guidance of our presidents and the joint efforts of both sides, our cooperation in the political, economic, security and cultural fields has deepened and produced tangible results. China is keen to work with Turkey to fully implement our presidents' shared understandings, grasp the emerging opportunities in our relations and make greater progress in our strategic-cooperating relationship.

Turkey is a major country in the region, an influential Islamic nation, a key emerging market and a member of the G20. It has an important place in China's "Silk Road Economic Belt" initiative. China places a high premium on Turkey's significant role in regional and international affairs and approaches our relationship from a strategic perspective. At the present, the Chinese people are working hard to realize the "two centenary goals" and the Turkish people are making tremendous efforts to implement its development plan for the 100th anniversary of the Republic. Both countries have great visions and bright prospects. As we strive to realize our countries' full potential, we must do more to build mutual trust and enhance our cooperation.

D.S.: Is there a possibility to ease the travel visas between China and Turkey? Are you implementing or considering implementing any policy to increase Chinese tourists coming to Turkey? Also, will there be any easing of taxes and encouragement policies for Turkish businessmen investing in China?

W.Y.: China welcomes Turkish friends for tourism, business, visits and education. We would love to see Chinese citizens visit Turkey for sightseeing, investment, etc. The reason is simple: they will contribute to friendly exchanges and mutually beneficial cooperation between our two countries.

Straddling the Eurasian continent, Turkey is a bridge between the East and West. Turkey's long history, beautiful scenery and rich heritage hold great appeal for Chinese tourists. In the last couple of years, Chinese television channels have produced TV programs about Turkey that are popular with viewers and prove effective in promoting the tourism and culture of Turkey. Last year, the number of Chinese tourists visiting Turkey exceeded 310,000, up by 57 percent from the year before. Although the number is not huge, the growth rate is stunning. Recently, the number has come down somewhat due to perceived security and other factors. Yet, I believe this is only temporary. Turkey has unique tourism resources to offer, so the number will pick up and more Chinese tourists will come your way. Three weeks ago, another productive round of consular consultation was held between the two sides, during which the Chinese side proposed practical and flexible solutions for the issues we face. I am confident our two sides are capable of striking a balance between facilitating personnel travel and ensuring national security. Moreover, to help more Chinese to come into contact with and experience Turkey, we welcome the opportunity to hold the "Turkey Tourism Year" in China in 2018. If the Turkish side plans some interesting events, it will be a tremendous opportunity. Turkey can count on China's active cooperation in this process.

China is one of the hottest destinations for foreign-direct investment (FDI) and has attracted more FDI than any other developing country for 23 years. We are reforming China's management of foreign investment and improving the business environment. Foreign investors, including those from Turkey, have benefited from these measures as well as the dividends created by China's reform, greater openness and rapid growth. We welcome, as always, foreign investments including those from Turkey, and we will continue to make it easier for Turkish and other foreign businesses to invest and seek opportunities in China.

D.S.: China is taking part in high-speed railway construction in Turkey. Which other big projects is China also interested in taking part in? Do you expect cooperation on energy and infrastructure?

W.Y.: Cooperation between China and Turkey has delivered notable results in recent years, a prime example being the high-speed railway. Chinese enterprises were involved in phase-II of the high-speed railway linking Ankara and Istanbul, which is the first such project undertaken by Chinese companies overseas. The rail link has markedly shortened the travel time between the two biggest cities of Turkey and facilitated the flow of passengers and goods between them. It has been applauded by the government and people of Turkey and demonstrated the strong points of Chinese construction, namely efficiency, technology, quality and financing. Let me give you some figures to put things in perspective. By the end of 2015, the in-service mileage of high-speed rails in China had reached 19,000 kilometers, the longest in the world and equivalent to three times the distance between Beijing and Ankara. China has over 1,900 bullet train units in operation, second to none in the world. The accumulated operational mileage has surpassed 2.77 billion kilometers, equivalent to six times the circumference of the equator. On average, over 1 billion bullet train trips are made in China every year. In recent years, China has helped build railways in Asia, Africa, Europe and Latin America.

At the moment, Chinese companies are negotiating with their Turkish partners about the Edirne-Kars high-speed railway. It is expected to link the eastern and western parts of Turkey, and play a big part in connecting China's "Silk Road Economic Belt" initiative with Turkey's "Middle Corridor" initiative. It will be an important building block of the transport corridor linking Asia and Europe and a "Steel Silk Road" running all the way from China to London. Such mega-projects can usually generate multiple dividends. For example: the Mombassa-Nairobi railway undertaken by Chinese companies, which will start operating next year, has created over 40,000 jobs and more than 20,000 technical training opportunities for Kenya and accounted for 1.5 percent of the country's gross domestic product (GDP) growth. In the same vein, I have no doubt that the construction of the Edirne-Kars high-speed railway will give a strong boost to Turkey's economic and social development.

Practical cooperation between China and Turkey covers a wide range of areas. It has gone well in energy and infrastructure, supported by cooperation documents signed between our two governments. The natural gas storage project under Turkey's salt lake contracted by Chinese companies is making good progress and will be completed on time. The two sides are also discussing a number of other win-win projects.
As a friend of Turkey, China hopes to grow together with your country. Let's help each other toward achieving our respective development goals.

D.S.: Regarding the cooperation of China and Turkey on security issues, which issues does it include? The Gülenist Terror Group (FETÖ) has some activities in China, like the Turkish Confederation of Businessmen and Industrialists (TUSKON), the Turkish Chinese Industrialist Businessmen Association (TUCSIAD) and the Pacific Business and Cultural Consultancy (PBCC). Have you taken any action against these organizations? Also, there are rumors that some members of these organizations have fled to Hong Kong and Taiwan. Can you share something on that issue?

W.Y.: China and Turkey have both suffered from terrorism. We are both firmly opposed to terrorism in all manifestations. Strengthening security and counterterrorism cooperation serves the fundamental interests of our two countries. Since last year, President Xi Jinping and President Tayyip Erdoğan have met three times and reached important agreements on upholding national security and fighting terrorism. Teams from both sides are earnestly implementing this agreement, and significant progress has been made in our security and counterterrorism cooperation. Neither of us allows any activity on its soil that undermines the other's security and stability. There is zero tolerance for whichever organization or individual that engages in such activities.

In the wake of the failed coup attempt in Turkey, China immediately expressed support for the efforts of the Turkish government to uphold stability in accordance with law and sent a vice foreign minister to visit your country. This speaks volumes about China's support for Turkey in maintaining national security as well as China's commitment to its relations with Turkey. This proves that China is a friend indeed.