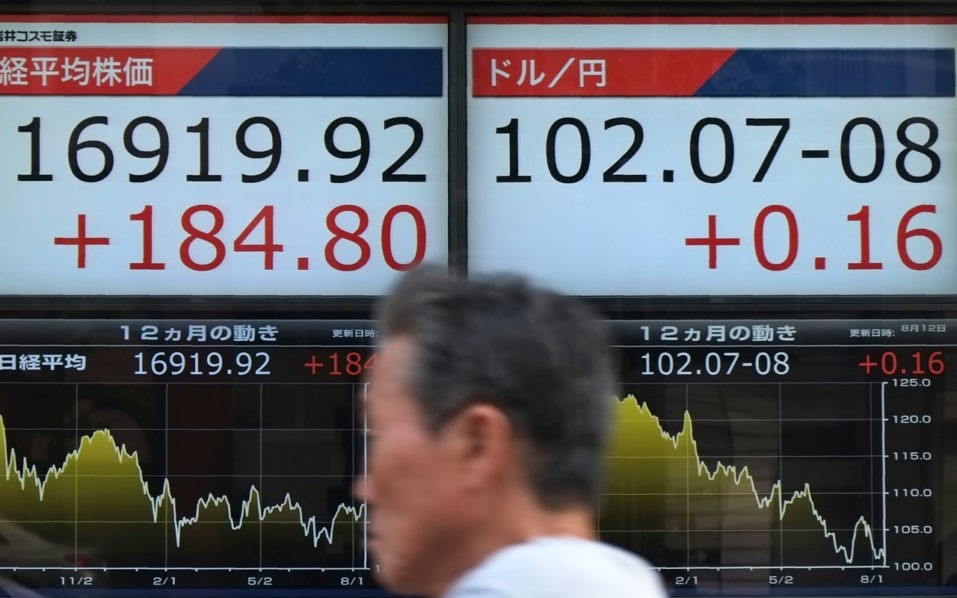 The U.S. dollar hit an 11-month peak Monday as the risk of faster inflation and wider budget deficits, if president-elect Donald Trump should go on a U.S. spending spree, sent Treasury and other benchmark global bond yields shooting higher.

Currencies in many emerging markets - from the Mexican peso to the Malaysian ringgit - fell to new lows and for share markets it made for a mixed start to the week. The pan-European STOXX 600 index had lost much of its early buoyancy by the time U.S. trading neared but was still up 0.2 percent as banks eyed a boost from higher interest rates and mining company shares rose on the back of Trump's promises of major infrastructure spending.

The reflation trade also saw futures for the S&P 500 and Dow Jones industrial add another 0.2 percent to 0.5 percent after the Dow chalked up its best week for five years last week. The dollar meanwhile bounded towards 108 yen, having hit and then dropped back from the eye-catching 100 threshold on the index that measures it against the world's other major currencies. Trade was brisk with the greenback's rally taking the pace off a resurgent sterling and seeing the euro slide to its lowest since the start of the year at about $1.0745.

"Clearly the market has settled on a 'buy dollar' theme on the basis there will be a debt-fuelled U.S. fiscal binge that will push up inflation," TD Securities European Head of Currency Strategy Ned Rumpeltin said. "People are repricing the Fed on the basis of that so it all seems to be a relatively straightforward."

The dollar has been romping ahead since Trump won the U.S. presidential election on Nov. 8, triggering a massive sell-off in Treasuries. Yields on the U.S. 10-year Treasury notes climbed to their highest since January on Monday at 2.28 percent, while 30-year paper reached 3 percent. German 30-year yields topped 1 percent for the first time in more than six months.

Just two days of selling last week wiped out more than $1 trillion across global bond markets, the worst rout in nearly a year and a half, according to Bank of America Merrill Lynch. The jump in yields on safe-haven U.S. debt threatened to suck funds out of emerging markets, while the risk of a trade war between the United States and China is also causing jitters.

"There are signs that higher bond yields and the knock of a stronger U.S. dollar are having a domino impact, taking down the weakest risky assets first, before moving on to the next," Deutsche's global co-head of forex, Alan Ruskin, said. "There is only so much financial conditions tightening that risky assets can take when fiscal stimulus is still a promise that lies some way in the future."

The stampede from bonds has seen 30-year yields post their biggest weekly increase since January 2009 and the 50-basis-point move in 10-year bonds is the equivilent of two standard interest rate hikes. Three Federal Reserve officials are due to speak later.

Mexico's peso, Turkey's Lira and South Africa's rand were all at the centre of the sell-off. Emerging market stocks also extended their post-U.S. election slump to more than 7 percent. MSCI's broadest index of Asia-Pacific shares outside Japan

ended at its lowest since mid-July as Hong Kong and Indonesia led the region's losses with drops of 2.7 and 2.2 percent. By contrast, Japan's Nikkei jumped 1.7 percent on the weakening yen to hit its highest in nine months. It got an added fillip from data showing Japan's economy grew at an annualised rate of 2.2 percent in the third quarter, handily beating forecasts.

Elsewhere, the New Zealand dollar eased after an earthquake yesterday that killed at least two people and prompted a tsunami warning that sent thousands fleeing to higher ground. The currency dipped to $0.7092, with losses limited by talk that rebuilding work would support an already strong economy and lessen the need for further interest rate cuts.

In commodities, the rampant U.S. dollar put pressure on gold, which lost 0.8 percent to $1,215 an ounce. It has lost 7 percent over the last week. Yet, industrial metals extended their bull run, with copper adding 1.2 percent. In the oil market, Brent crude began backsliding, dipping 70 cents to $44.17 a barrel, while U.S. crude eased 60 cents to $42.75.

One market rate, measuring expected U.S. inflation over the five-year period that begins five years from today, shot up 30 basis points to 2.46 percent last week, the highest since late 2014. It had been as low as 1.84 percent in June. Fed fund futures in turn imply a better-than-70-percent probability the Fed will hike rates in December.

Speaking in Frankfurt, European Central Bank Vice President Vitor Constancio warned about the uncertainty being caused by the sudden swing in markets. "We should be cautious in drawing hasty, positive conclusions from those market developments because they may not necessarily indicate that the world economy will have an accelerating recovery with higher growth," he said.