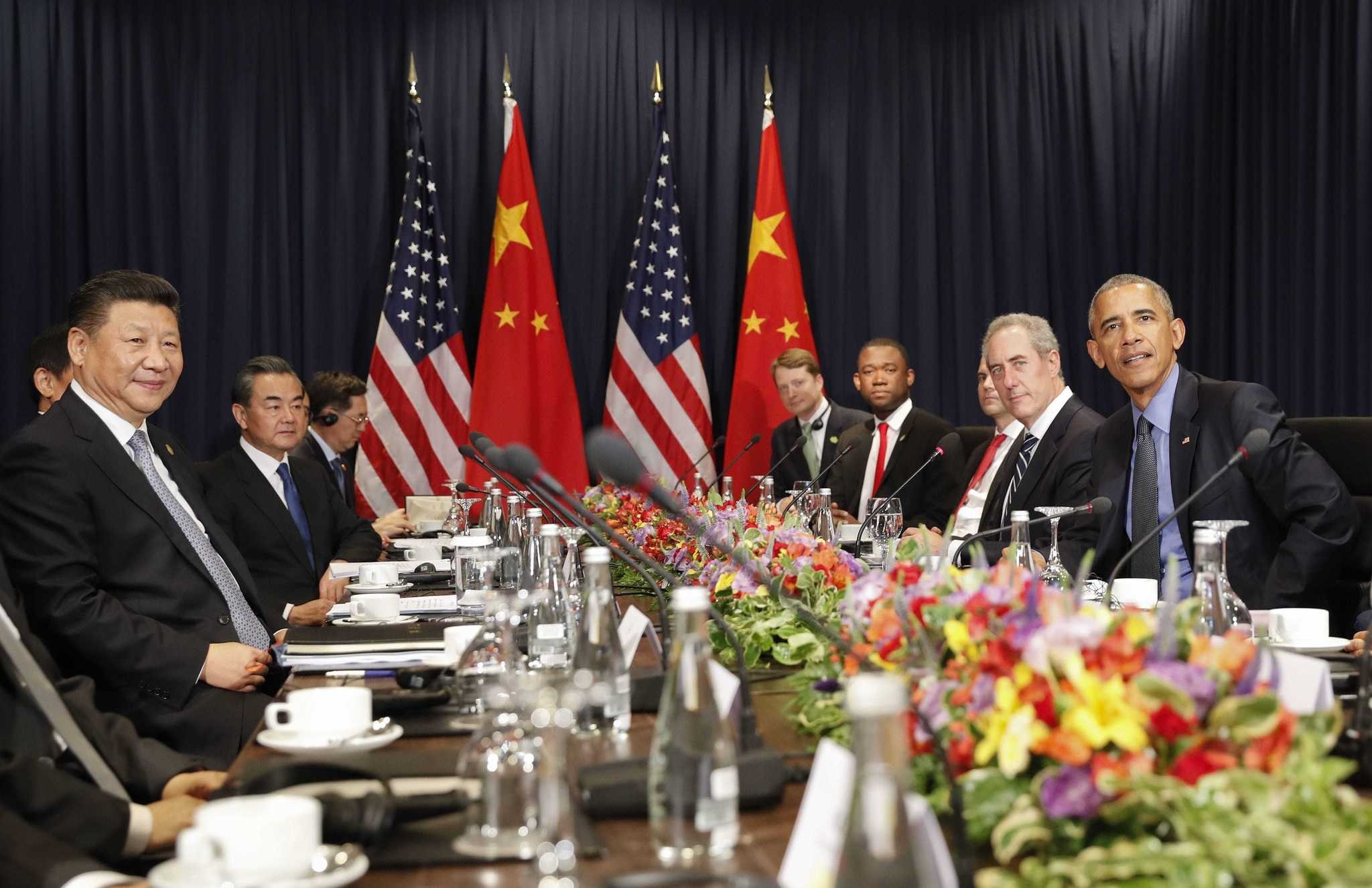 U.S. President Barack Obama (R) with Chinau2019s President Xi Jingping and members of their delegations, during their meeting as part of the Asia-Pacific Economic Cooperation (APEC) in Lima, Peru.
by French Press Agency - AFP Nov 21, 2016 12:00 am

Asia-Pacific economies will strike more trade deals among themselves as opposition grows in Europe and the U.S. toward globalization, analysts say, warning the West will lose out as the dynamic region powers ahead

The most high-profile victim of recent protectionist sentiments has been a major U.S.-led trans-Pacific deal, which is as good as dead after the shock American election victory of Donald Trump this month.The Trans Pacific-Partnership (TPP), an agreement of 12 Pacific Rim economies, was the economic plank of President Barack Obama's "pivot" to Asia, and notably excluded China as the U.S. sought to combat Beijing's rising influence.

But it is just the latest accord to run into trouble amid growing protectionism in developed economies, where globalization is increasingly regarded as a bogeyman responsible for sending jobs abroad and eroding living standards.

A proposed deal between the European Union and the U.S. is now unlikely to be signed after Trump's win, while a trade accord between the EU and Canada took seven years to complete and was nearly torpedoed by resistance from a tiny Belgian region.Given such problems, much of Asia - where economies have generally enjoyed robust growth in recent years and are heavily dependent on exports - will be looking with trepidation at potential accords with the West, analysts say.

"The result of having the U.S. and Europe turn inward is that Asia will focus on regional agreements," said Deborah Elms, executive director of the Asian Trade Centre in Singapore.

"The global system will not function if the U.S. blocks action and the EU remains stymied."

The immediate effect will be to give China a free hand to push its own favored regional accords, a heavy blow to Obama, who had hoped the TPP would allow the U.S. to write the region's trade rules before Beijing got there.

At a meeting of the 21-member Asia-Pacific Economic Cooperation (APEC) group in Peru this week, Chinese President Xi Jinping took the opportunity to urge support for two potential accords it is backing.

These are an APEC-wide deal, and a 16-nation agreement whose members include Southeast Asian countries and India, but notably excludes the United States.

According to a study carried out by APEC and released at this week's meeting, 145 trade deals existed between the group's members as of December last year, at least 30 of which had been struck since 2008.

The U.S. election of Trump - who repeatedly railed against trade accords and dubbed the TTP a "terrible deal" - combined with rising opposition to free trade elsewhere is likely to accelerate that trend, experts said.

Rising protectionism has alarmed supporters of free trade, who feel that it is being scapegoated in many developed nations as an increasingly squeezed middle- and working-class seek something to blame.

Matthew Goodman, an expert in Asian economics from the Center for Strategic and International Studies, said trade had become "a target of a lot of anxieties."

But he added that the problems were in reality not just about trade but more broadly about "economic change, about social change, about other things that have dislocated people's lives."

There have however been genuine concerns about the way major deals have been negotiated, such as that details about the TPP were shrouded in intense secrecy during talks.

Still, many observers believe that Europe and the U.S. are set to inflict damage on their own economies as they turn away from free trade.

"The West will certainly lose out," said Elms of the Asian Trade Centre.

"American companies will lose competitiveness relative to their counterparts in markets in Asia."

But those who may lose the most are consumers, who have benefited from ever cheaper goods in recent years as free trade flourished.

"Consumers have better choices, they get better quality goods because of the competition sparked by free trade," an Asian delegate at the APEC summit told AFP, requesting anonymity to speak freely.
RELATED TOPICS