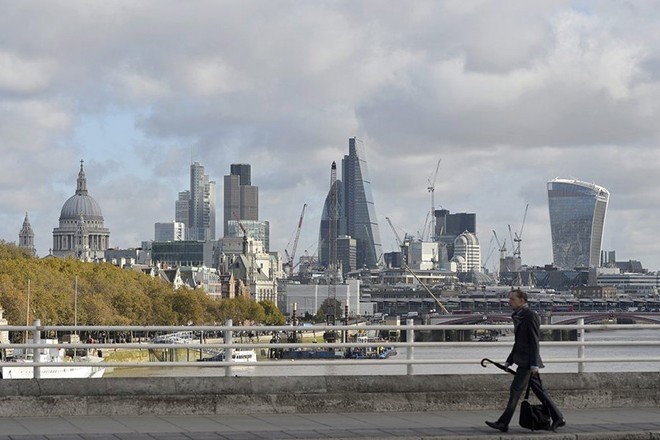 A man crosses Waterloo Bridge with the backdrop of the City of London and the financial district in London.
by French Press Agency - AFP Nov 21, 2016 12:00 am
Britain'sfirst post-Brexit budget will focus on infrastructure and could spell an end to the previous government's rigid fiscal targets, according to a treasury statement released yesterday. The budget will be new Finance Minister Philip Hammond's first set piece since replacing George Osborne who resigned following the June vote.

Under previous Prime Minister David Cameron, Osborne oversaw an austerity program of spending cuts and tax increases at odds with new Premier Theresa May's views on the economy, which she has said no longer works for everyone.

Hammond promises to place "investment in infrastructure ... at the heart" of Wednesday's autumn statement to lawmakers, exactly five months after the referendum backing Brexit, the statement said. "He will set out how the government will fire up the nation's economic infrastructure - all part of plans that form the backbone of ongoing work to close the U.K.'s productivity gap," it added.

The treasury statement also hinted at a loosening of Britain's fiscal straightjacket, introduced by Osborne. Osborne's austerity policies were intended to eliminate the budget deficit following the global financial crisis. But he scrapped his objective of producing a budget surplus by 2020 in July after May - in a speech launching her bid to become prime minister - said the policy should be dropped. "Hammond will set out a new fiscal framework, outlining the need for flexibility to allow government to respond to changing economic conditions," the statement added.

However, the finance minister told BBC's "Andrew Marr Show" on Sunday that the government was committed to tackling the country's "eye-watering" deficit. The statement will be the first indication of how Britain plans to adjust its economy to account for Brexit. "Many forecasts point to a slowing of economic growth next year and a sharp challenge for the public finances," said Hammond, adding, "We need to be match fit for the opportunities and challenges."

The Sunday Telegraph said Hammond planned to balance the books by taxing job perks given to middle-income earners, such as mobile-phone contracts and gym memberships.John McDonnell, the opposition Labor party's shadow finance minister, accused the government of "going back to giveaways and gimmicks," saying the proposed infrastructure plans were "simply replacing some of its earlier cuts."

The plans will include 1.3 billion pounds of new investment in Britain's roads to tackle congestion. As well as tax-and-spend plans, the budget will include the Conservative government's latest forecasts for economic growth. The autumn statement is seen as a mini-budget before the main tax-and-spend announcements given usually in March.

While the risk of recession in Britain caused by the Brexit fallout has largely disappeared following upbeat data releases since the June 23 vote, some economists fear the economy could still take a turn for the worse.
RELATED TOPICS