British PM May to pledge investment in R&D, to cut corporate tax 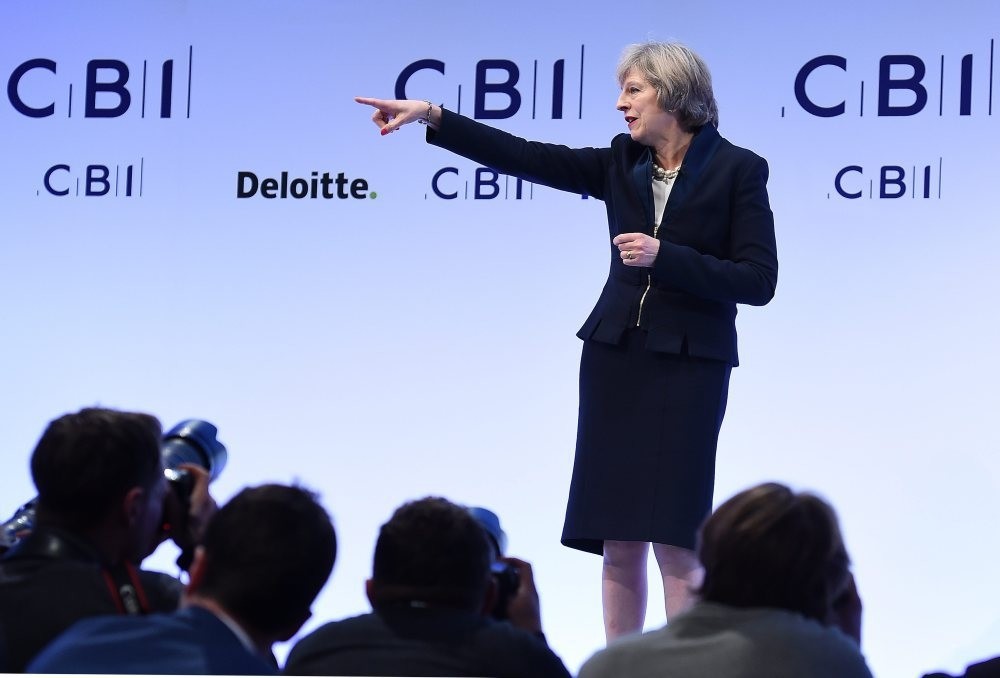 British Prime Minister Theresa May delivers a speech on Brexit and the British economy at the CBI conference in central London yesterday.
by French Press Agency - AFP Nov 22, 2016 12:00 am

British Prime Minister May offered business leaders a trade-off, pledging more investment in R&D by investing an extra 2 billion pounds a year. She further said that her government will reduce corporate tax to the lowest level in the G20

Prime Minister Theresa May promised yesterday to boost research investment as she sought to reassure business leaders nervous about the "cliff-edge scenario" of Britain leaving the European Union. May told a Confederation of British Industry (CBI) conference that her government would invest an extra 2 billion pounds a year ($2.5 billion, 2.3 billion euros) in science research and development by 2020. She also committed to the plans of the previous government to introduce a 17-percent rate for corporate tax - the lowest level in the G20.

"Today, Britain has firms and researchers leading in some of the most exciting fields of human discovery," she said. "We need to back them and turn research strengths into commercial success." Businesses voiced concerns to the prime minister about the impact of Britain's departure from the EU, and the uncertainty surrounding the country's future trading terms with member states. "Businesses are inevitably considering the cliff-edge scenario - a sudden and overnight transformation in trading conditions," Paul Drechsler, CBI president, said Monday. "If this happens, firms could find themselves stranded in a regulatory no man's land." Others echoed the business chief's concerns. "I'm not too optimistic about Brexit," a representative from German engineering firm Bosch told AFP, speaking on condition of anonymity. "I don't see things moving in the right direction."

May acknowledged that Brexit "creates uncertainty for business" and that they "need some clarity." The prime minister has so far refused to outline what she will demand from EU leaders, but promised to update business on plans that did not risk "prejudicing the negotiation to come." "If we approach the difficult negotiations to come in the right way, with the right spirit, we can strike a deal that's right for Britain and right for the rest of Europe too."

One of her government's top priorities would be to secure an "early agreement" on the status of British nationals in Europe and EU nationals in Britain. The continued availability of a European workforce is a key concern for British businesses.

May spooked some industry leaders last month when she slammed "dysfunctional" markets and warned tax-avoiding multinationals she was "coming after" them during her first keynote speech as leader.

Ryan Bourne, head of public policy at the Institute of Economic Affairs, said the speech signaled an "ideological change" in the direction of the Conservative Party towards a more interventionist approach. However, she struck a softer tone on Monday, saying her government "will always believe" in free-markets, capitalism and business but insisted they needed to serve the interests of everyone.

"If we support free markets, value capitalism and back business -- and we do -- we must do everything we can to keep faith with them," she said. "With not enough people feeling that they share in the wealth created by capitalism... the way to keep that faith is to embrace reform."

May also appeared to step back from demands to put employees in company boardrooms, explaining her plans did not include the direct appointment of workers or trade union representatives to boards.

Other speakers at the one-day conference include Paul Kahn, president of Airbus Group UK, and Nicola Mendelsohn, Facebook's vice president for Europe, the Middle East and Africa. The social networking site Monday became the latest US tech giant to announce new investment in Britain with 500 extra jobs.

The British economy has remained resilient in the face of post-referendum uncertainty, but finance minister Philip Hammond is expected to announce a downgrade in future growth prospects when he presents the government's first major post-Brexit financial statement on Wednesday.
RELATED TOPICS