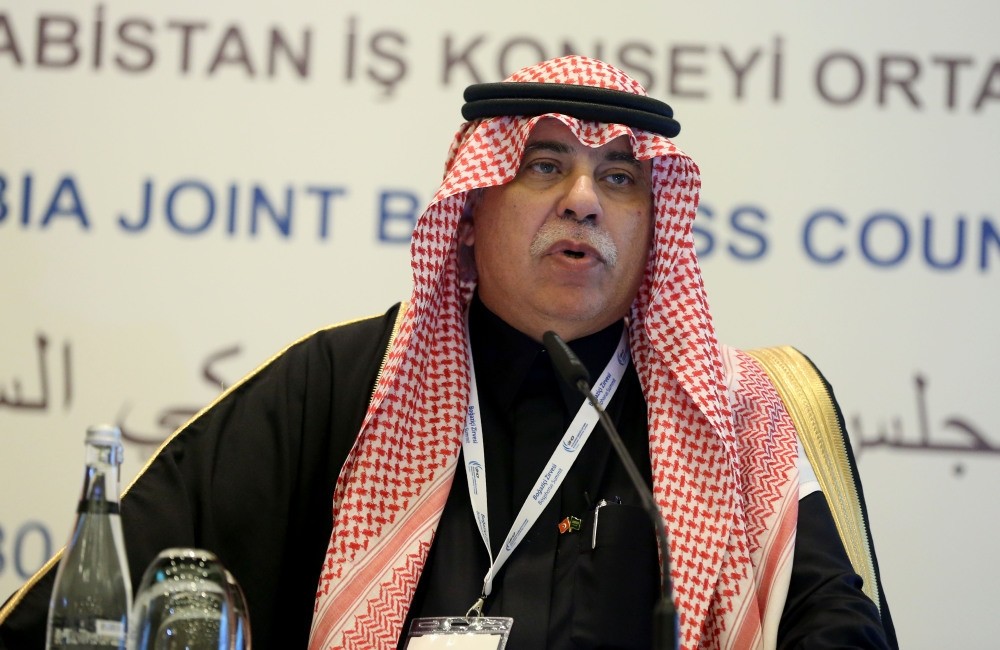 Saudi Minister Al-Qasabi speaks at a conference in Istanbul.
by Daily Sabah Dec 01, 2016 12:00 am
Speaking at the Turkey-Saudi Arabia Business Council Joint Meeting organized by the Foreign Economic Relations Board (DEIK), Saudi Arabian Trade and Investment Minister Majed bin Abdullah Al-Qasabi said Saudi Arabia is Turkey's strategic partner and ally. The minister said they will mobilize opportunities in Saudi Arabia to improve their investment relations with Turkey, and ease the visa process for Turkish businesspeople to enable them to get two-year, multiple-entry visas.

Congratulating Turkish people for successfully overcoming the July 15 coup attempt, Al-Qasabi also wished stability to Turkey and its economy and development, suggesting that they want to be part of the solution, not the problem, since solutions are in the hands of the people just as problems arise from them. Urging both sides to find solutions and overcome problems despite all the challenges, Al-Qasabi invited the attendees to prepare a vision for the next two years for the Turkey-Saudi Arabia Business Council, and indicate its priorities.

"What is important is the improvement of mutual investment relations between Turkey and Saudi Arabia. We will mobilize all the opportunities in ministries and other institutions in Saudi Arabia to improve our investment relations," Al-Qasabi said. Regarding business visas given to Turks, Minister Al-Qasabi said their visa processing will be done very quickly and they will give multiple-entry visas, stressing that these projects will be carried out rapidly and that Turkish businesspeople will benefit from them.

Yusuf Cevahir, head of the DEİK Turkey-Saudi Arabia Business Council Executive Committee, highlighted that the two countries are moving towards more strategic and profound projects in the coming period. Recalling that previous investments were mainly directed towards real estate and export products, but that these were ordinary investments, Cevahir said from now on Turkey's recent move towards both Saudi Arabia and all Gulf countries prioritizes mostly deeper and longer-term relationships that give particular importance to strategic investments. Cevahir also underlined the difficulties of bureaucracy that businesspeople face, saying, "If we want to do business together and realize joint investments, the bureaucracy should open the way."

Council chairman Mazen Rajab correspondingly stated that the foreign trade volume between the two countries is about $6 billion. Stressing that Saudi Arabians' investments in many sectors will benefit both countries, Rajab said they have conducted many projects with Turkish businesspeople on housing projects in Saudi Arabia. They are currently working on the production of medical supplies there, as well as holding talks on the production of automobile and vehicle spare parts. Rajab added that they give weight to renewable energy sources in the industry, in addition to alternative energy sources.