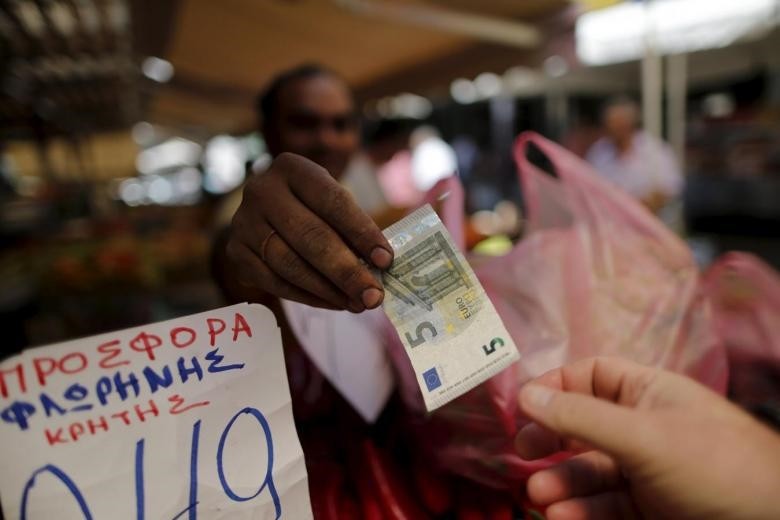 A vendor gives a five Euro bank note back to a customer at the central market in Athens, Greece.
by Dec 05, 2016 12:00 am
Eurozone finance ministers meet today as far apart as ever on the debt relief measures demanded by the International Monetary Fund for it to back their bailout program for Greece.

The IMF played a key role in two massive rescues for Greece but baulked at a third in 2015, worth 86 billion euros ($92 billion), warning that Athens would never get back on its feet unless its debt mountain was cut outright.

The fund is obliged to only lend to countries that can repay and its head, former French Finance Minister Christine Lagarde, has faced accusations that she bent the rules in the two previous bailouts to help save the eurozone.

Europe's largest economy Germany insists meanwhile that Greece must meet all its commitments on spending cuts and tax hikes before measures to reduce a debt mountain equal to some 180 percent of annual economic output can be considered. "We are going around in circles," one EU official said, as an end-of-year deadline to resolve the impasse looms large.

The situation is further complicated by differences within the 19-nation single currency bloc. France for example - where public finances are far from healthy - believes Athens should be cut some slack.

Greek Prime Minister Alexis Tsipras and French President François Hollande agreed Saturday that "a deal on a technical level is needed by [Monday] and measures for debt relief by the end of the year are imperative."

During a May review, the European Union and IMF agreed to start discussions on debt relief by end-2016 if Athens met its reform pledges.

The issue turns on a key figure - 3.5 percent, the primary balance, or the surplus on the public finances before debt repayments, that Greece is supposed to reach. The target is very high - and most countries do not even come close - but Germany and other eurozone hardliners believe it is the only way to solve the issue once and for all, even if Greece has to take additional austerity measures to get there.

For the IMF, that option is totally unrealistic - an economy with an already unsustainable debt burden cannot be expected to tighten the screws further.

A source close to the negotiations suggested the Washington-based lender might appear to go along, "just to show how impossible it is."

Eurogroup chief Jeroen Dijsselbloem told European lawmakers that debt relief measures would be discussed Monday in the hopes of persuading the IMF to sign on to the bailout. "The IMF has a point that running a primary surplus of 3.5 percent of GDP for a very long time is a huge thing to ask and we need to be realistic here," Dijsselbloem said.

It will be against this backdrop that finance ministers will also discuss a recommendation by EU Economic Affairs Commissioner Pierre Moscovici that after years of hugely unpopular austerity, it is now time to ease off the fiscal brakes and boost growth.

The austerity drive has stoked growing anti-EU sentiment, likely to get a fresh airing in votes Sunday in Italy and Austria which will likely colour Monday's talks.

Moscovici - another former French finance minister - said governments with strong enough finances could boost spending by an average 0.5 percent of GDP to bolster a modest recovery.

His plea got a blunt rebuff from Germany's hardline Wolfgang Schaeuble, who in the 2015 cliff-edge bailout negotiations famously suggested it would be simpler for all concerned if Greece just left the eurozone.

"The role of the Commission is to ensure member state budgets... meet European rules," Schaeuble told the Bundestag.